3 recommended premiere series to watch this weekend on Netflix, Amazon and Apple TV+ 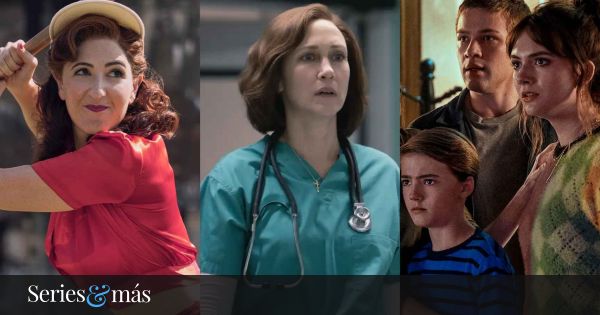 It's Friday and it's finally time to enjoy some free time. A good option can be to go to the cinema to enjoy the novelties on the billboard, however if you are one of those who prefer to stay at home watching one episode after another, we bring you our weekly recommendation with three premiere series to watch over the weekend from August 12 to 14 on Netflix, Amazon Prime Video and Apple TV+.

Let's start with Locke & Keythe series based on the comics of Joe Hill who has premiered his third and final season at netflix. The second recommended title is They strike, the remake of the 1992 film that arrives on Amazon Prime Video and that decides to carry out an opening of views and go into the most diverse part that was part of the story. Finally, we include After the hurricanean Apple TV+ miniseries based on true events and the aftermath of Hurricane Katrina.

The brothers Tyler (Connor Jessup), Kinsey (Emília Jones) and Bode (Jackson Robert Scott), fought with their mother Nina (Darby Stanchfield) against the demonic Dodge (Laysla d'Oliveira) and thanks to the magic keys, they manage to defeat her at last. In this new season, they will have to face a new enemy.

In this third and final season, the series returns to the original lane and becomes more faithful to the comics. In fact, it presents us with what is already one of the most emotional sequences in fiction, taken from one of the most beloved volumes by fans.

Carlton Cuse and Meredith Averill are grateful to have given us the ending it deserves Locke & Keylocking the big KeyHouse with a strong magic key, with more special effects and remembering the place it came from.

This television adaptation of the 1992 film of the same name is set in 1943, a time when, while men were at war, women became the workforce that saved America's industry and also baseball thanks to a professional women's league with players willing to give it their all on the field.

Coinciding with the anniversary of the 1992 film of the same name starring Geena Davis and Tom Hanks, comes this television adaptation of They strikewhere we will find again the same freshness and fun tone that was in the original feature film.

The big difference is established with the narrative intentions of creators Will Graham and Abbi Jacobson, who decide to go a step further and tell the stories that starred African-American and LGBTI women in this same era.

'After the Hurricane' (Apple TV+)

Based on true events and adapting the book by Pulitzer Prize-winning journalist Sheri Fink, this miniseries narrates the impact of hurricane Katrina and its aftermath on a hospital in the area. As the waters rose, the power went out, and the heat soared, exhausted workers at a New Orleans hospital were forced to make decisions that would haunt them for years to come.

The story told here is truly disheartening and painful to watch, but at the same time, it is worth enduring the sadness it will bring to the audience, who will inevitably find certain similarities with the health management of the coronavirus.

Delving into a situation as real as it is unimaginable, After the hurricane personifies the archival footage that the media once came to normalize, showing humans who were victims of a catastrophe and also of a system that left them out and tried to blame them for trying complete the job and save as many lives as possible.