A protest pause for the immediate release of the “arrested” depositor, Sheikh Hussein | Policy 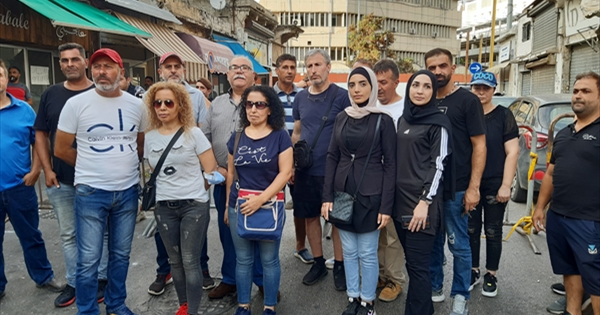 Sheikh Hussein’s family and all depositors and rights holders staged a protest in front of the General Directorate of Internal Security Forces in Ashrafieh, to demand the immediate release of their son Bassam, who was deceived by the state and promised to release after the “Federal Bank” crisis, to enter into an open hunger strike, and the days of his arrest continue without Any move by the "false state", which caused the deterioration of his health as a result of his hunger strike, according to his relatives.

The protesters demanded the release of Bassam according to a residence document and the follow-up of judicial procedures after that, holding the Association of Banks and its departments responsible, and they also appealed to those concerned to intervene due to Bassam's deteriorating health.

During the sit-in, Tariq Al-Sheikh Hussein, brother of the arrested Bassam, gave a speech, in which he announced that “the Minister of the Interior, the Internal Security Forces and Major Hammoud are not responsible for arresting my brother, but the judiciary and the corrupt authority under pressure from the Association of Banks. They violated the agreement with him, as it was the agreement of the officers present that he would be detained for half an hour and then return home, and I now call upon public opinion and the world to show solidarity with us to admit him to the hospital and not to stay in the cell because of his health because he suffers from shortness of breath and doubts in the heart, as I carry The judiciary and the Association of Banks are responsible for what might happen to my brother.”

While the lawyer in the Association of Depositors, Dina Abu Zour, suggested that “Bassam will remain in detention until tomorrow, Tuesday, due to the official holiday, to be transferred to the Public Prosecution, and that Sheikh Hussein is trying to pressure through a hunger strike, especially with his belief that his continued detention contradicts the agreement with him or the settlement that ended The crisis of detaining employees in the Federal Bank branch,” she confirmed, “We are waiting for the file to be transferred to the Public Prosecution, and the case is on its legal track if it is compared with the course of the case of depositor Abdullah Al-Saei.”

For his part, one of the association’s lawyers confirmed that “what is happening is due to the inaction of the political and banking class,” calling for “a fair and independent judiciary that holds the Association of Banks and the political class accountable, to recover depositors’ money,” and called for “a transparent and fair recovery plan, restructuring banks, and restoring structuring public debt.

In the context, the head of the General Labor Union, Bechara Al-Asmar, confirmed in a statement, “What happened in the Federal Bank in Al-Hamra, is a dangerous matter that establishes the fall of the last fortresses of the rule of law and opens the door for workers, employees, retirees, the military and all citizens to collect their rights by themselves, even in special ways that are sometimes presented. The security and lives of other citizens and bank employees who were present in the places where similar incidents occurred or will occur.”

And he said: “What happened from the detention of freedoms is a response to the detention of the freedom of all Lebanese in banks, the seizure of their lifespan and their freedom to move to improve their lives and their health. And since these banks have practiced a policy of great oppression in controlling citizens, humiliating them with circulars and expenses, restricting freedom of movement, lack of respect, refraining from paying and paying what is due according to contracts, and determining withdrawals and transfers, the time has come for a corresponding action against those who have turned into moneylenders, money-takers, and money-exiters in and out of the unknown. They are attacking deposits at home and abroad, the future of families and their children, and those who propose to liquidate them and turn them into fictitious funds intended to be established, or into shares in sea companies as partners in the water.”

For its part, the "United" coalition and the "Depositors Cry" association called for a stand in solidarity with the arrested depositor, Bassam Sheikh Hussein, at nine in the morning next Tuesday in front of the Palace of Justice.

In a statement, they criticized, “what the hands of bank owners, chairmen and members of their boards of directors and managers have committed in terms of abuse of depositors, following the seizure of their money and the robbery of part of it with the most horrific types of blackmail that lacks any human, moral or legal dimension,” hoping for a “judicial revolution that leads to a just and free judiciary that will take place.” He presented it to the President of the Supreme Judicial Council, Judge Suhail Abboud, early next week.

And they considered that "what happened with the agent of depositor Hussein, Rami Aleik, has exceeded all expectations in malicious acts and cures to the point of repeated physical assault on him, in light of the deafening and surprising silence of the Syndicate and Bar Association and the Supreme Judicial Council."

The coalition and the association also criticized “the campaigns carried out by some media against anyone who raises their voice to demand their rights, as activists in the association and the coalition, especially lawyer Aleq, received their largest share of it, after the bank’s mouthpieces took charge of spreading rumors and falsehoods that have nothing to do with the truth,” accusing the banks “represented by an association.” The banks and their head, Salim Sfeir, as well as the management of the Federal Bank and the director of the Hamra branch, Hassan Halawa, “responsibility for what the detainee may be exposed to, Hussein, whose relatives demand that he be transferred to the hospital immediately, given his health and psychological condition.”