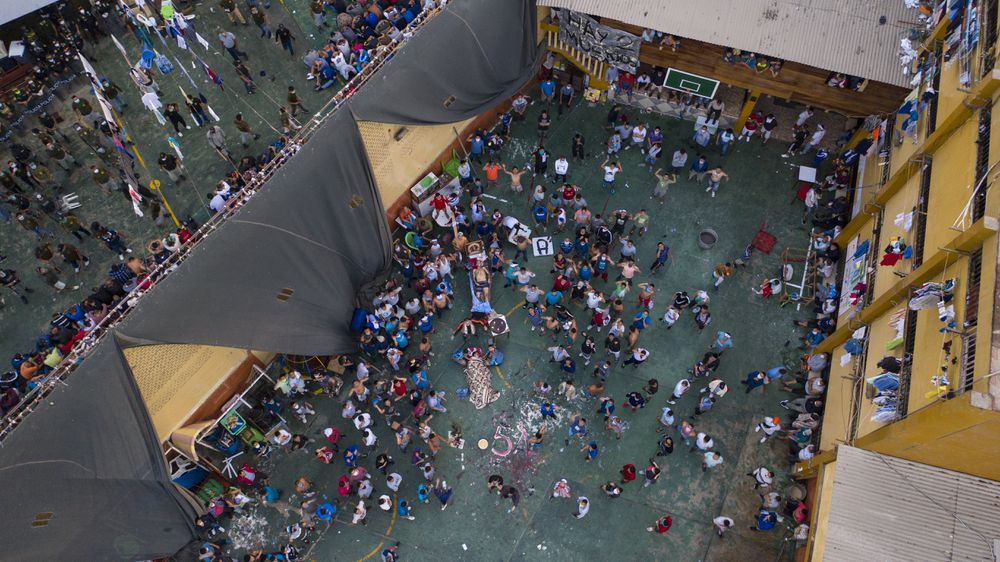 In the mid-afternoon of Monday, a group of relatives of prisoners from the Castro Castro prison in Lima approached the outside of the center to denounce the lack of protection in the face of the pandemic in which the inmates live. "They do not let us deliver medicines, there are deaths from covid-19 they don't collect ”, shouted a woman, as she showed some blister packs of pills inside a paper bag. Since noon, the prisoners protested, they had gone up to the top of the pavilions to show, with posters and slogans, their despair in the face of contagion.

According to the National Penitentiary Institute (INPE) they set fire to mattresses and committed vandalism. "The police have launched tear gas canisters and they are firing, they are not just pellets," said the relatives. On Monday morning, the prison authority reported that the balance of the repression of the protest was nine deceased prisoners and two wounded, 60 prison workers and five policemen have also been injured. Since March 22, when the first protest in a prison occurred due to the threat of the spread of the disease, 13 inmates have been killed by police action against the same type of protests. Another 15 have died from covid-19 and the INPE calculates more than 600 infected prisoners.

The Castro Castro prison houses 5,500 people despite the fact that its capacity is less than 2,000, Ana Paula Méndez, from the Red Ayni Peru Association, which carries out educational work with the inmates, told EL PAÍS. "They have not been given rapid diagnostic tests, for weeks they have been demanding attention, they have been holding back from protesting and have made a peaceful strike. They do not have masks, we are looking for donations to deliver to them, ”Méndez said Monday as police quelled the protest in the eastern Lima prison. Shortly after, the president of the National Penitentiary Institute, Gerson Villar, confirmed to EL PAÍS, that since Sunday there had been two prisoners who died and that there was a delay in removing one with suspicion of covid-19.

"The pick up despite our efforts (before health officials) is not immediate," he explained. The body was removed at 3:00 p.m. on Monday, the official added. V illar reported that in the Castro Castro prison they carried out rapid tests on 145 workers and one was positive, and there were no diagnoses of the inmates. "We have carried out a peaceful march, but the INPE has begun to drop tear gas bombs, this has gone out of control in a pavilion. In mine, the peaceful strike against our cartels continues, we are showing them from the patio to the hill so that people can record our request, ”said an inmate in an audio that circulated on WhatsApp on Monday afternoon.

"We are not asking for freedom, but to be able to continue with our lives, because there are a lot of symptomatic people. People are dying and all they do is put them in a space and they can be thrown away. They have not taken a test and everything we have obtained from medicines we have obtained from the outside. The topic is out of supply and we have nothing to combat the coronavirus ”, the prisoner described.

The deputy for constitutional rights of the Ombudsman, Percy Castillo, proposed on Tuesday morning on a radio station the formation of a "covid-19 command" for the prisons. Each of the 25 regions in Peru has a task group to combat the disease, named with the same name as that of a high-level team that advises the Minister of Health and complements his tasks. "This was foreseeable, that the covid-19 crisis It was going to strongly impact the prison system due to its absolutely weakened health system and overcrowding that exceeds 144%. The measures should have come more quickly and with greater force to avoid the picture we have today. In many years the prison system had not lost so many lives in a riot, nor so many losses due to illness. This will generate (the State) international responsibility in the future, "Castillo warned.

Additionally, on Monday, there were also riots in the Ancón (Lima), Huancayo (Junín), and Chiclayo (Lambayeque) prisons due to the lack of health protection for inmates in the pandemic. The INPE also confirmed that two prison workers, from Ancón and Trujillo have died from the disease. Until Monday morning, the Ministry of Health reported that there are 28,699 people infected in the South American country and in 42 days of emergency 728 people have died. On Tuesday, the digital media IDL-Reporters revealed an official underreporting of a third of deaths by covid-19 until April 24. The figures of the main crematorium in Lima and a funeral parlor, which totaled 1,073 deaths from the virus, contrasted with those of the Ministry of Health, which had recorded 240 deaths up to that date.

Minister Zamora, in a virtual appearance before Congress, recognized the "possibility of underreporting," but denied that there is an intention to deny information. In Ancón II prison, where there have been protests since last week, one of the infected inmates is Antauro Humala, brother of the former president Ollanta Humala, confirmed this Tuesday his wife. He is serving a sentence for having participated in the assault on a police station in Andahuaylas in 2005, which resulted in the death of four policemen.

Information about the coronavirus

- The coronavirus map: how cases grow day by day and country by country

- Guide to action against the disease

- If you have symptoms, these are the phones that have been enabled in every country in Latin America.

Due to the exceptional circumstances, EL PAÍS is offering all its digital content for free. Information regarding the coronavirus will remain open as long as the severity of the crisis persists.

Dozens of journalists work tirelessly to bring you the most rigorous coverage and fulfill their public service mission. If you want to support our journalism you can do it here for 1 Euro the first month (from June 10 euros). Subscribe to the facts.