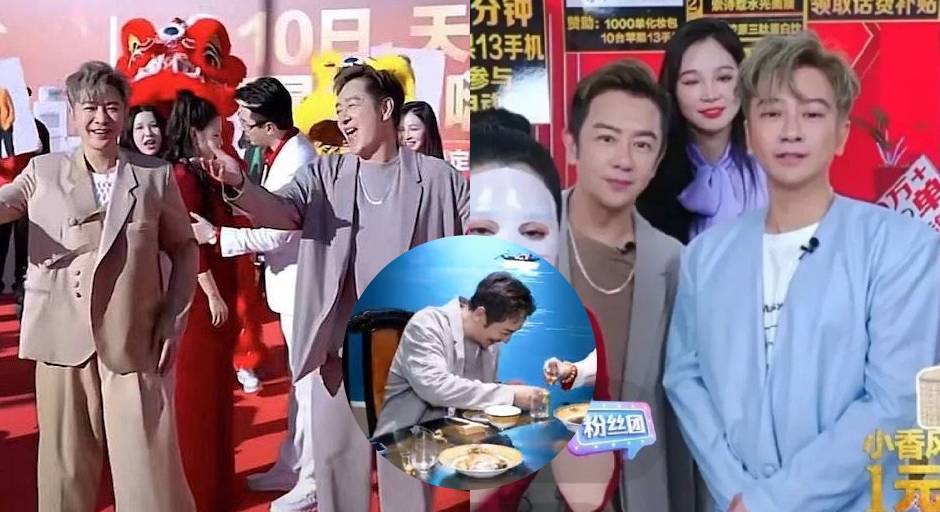 Chen Haomin and Sun Yaowei have been stationed in the Mainland for a long time in recent years. It has been pointed out that Sun Yaowei's income in two live broadcasts has reached over one million Hong Kong dollars, and with commercial performances, he earns over ten million a month, and Qu Qiang has tried to receive 80 million gifts in one live broadcast; it has also been rumored recently that Chen Haomin and his wife Jiang Lisha spent 8 million to buy a 3,000-square-foot unit in Changsha. Since Chen Haomin and Sun Yaowei are accused of having the same image and appearance, they often make movies together to entertain themselves, and they also bring their wife to parties, which is quite a good feeling. A few days ago, the good brothers continued to live together, supporting the tens of millions of Internet celebrities in the mainland "Guoyue couple", and filmed more than 20 videos and live broadcasts. Guoyue Husband and Wife" backing dancers and set boards, netizens lamented that the two of them lowered their worth in order to make money.

When netizens saw Chen Haomin, Sun Yaowei and the "Guoyue couple" having dinner on the same stage, Chen Haomin bowed slightly to show respect. During the live broadcast, Chen Haomin and Sun Yaowei stood in the back row and sang and danced for the "Guoyue Couple". When "Guoyue Husband and Wife" introduced the product, Chen Haomin and Sun Yaowei seemed to be unfamiliar with the product, and seldom spoke during the whole process. I saw that they actively cooperated, handing over objects and occasionally calling for everyone to place an order; Naturally, it's embarrassing: "smiles are not funny", "professional fake smiles", "this person laughs really or not", "where is the handsome once? It's horrible" and so on.

Chen Haomin and Sun Yaowei's various behaviors and the fact that the two still wore long-sleeved suits to attend the event in the hot summer, netizens couldn't help sighing that it is difficult to eat now: "Bend your waist for life", "Is this the greatness of money, or the sorrow of stars?", "The two stars are too embarrassing", "A pair of clowns", "I can't believe that Chen Haomin and Sun Yaowei have become the backing dancers and set boards of Internet celebrities", "Professional fake smile", "Now these stars are really disappointing. ", "This is too cheap", "It's too ironic to watch" and so on.