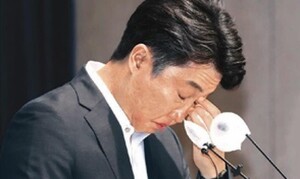 On the 13th, former People's Power Representative Lee Jun-seok held a press conference at the National Assembly Communication Hall and said, "Looking back, I was the person who sold dog meat by waving sheep's heads. During the election process, I wanted to quit a few times and cut the ties.” He said, “During the presidential and local elections, I heard stories of people calling me that XX one after another at a place where people gathered, and I hoped to win the election nonetheless. In order to do this, I remember when I said that I had to be patient, running around until my feet swell and shouting to rest.

Former Chairman Lee Jun-seok said, “I had to work hard as a party representative to make a person who said XX and XX toward me throughout the presidential election process on the one hand. was,” he pleaded.

Regarding 'the reason why the Yun Seok-yeol administration, which has not been inaugurated for less than 100 days, is in crisis', Lee said, "In the end, the regime is in crisis because what Yoon Hee-kwan wants and what the president wants, and what many party members and people want, do not match at all. ” He said, “Kwon Seong-dong, Lee Cheol-gyu, Jang Je-won, and Jung Jin-seok, Kim Jeong-jae, and Park Soo-young’s real names,” and said that the Yoon-hak officers should go to the inferior region, not the dominant region. However, the presidential office did not make an official statement on the situation.

On the 15th, Chosun Ilbo, Donga Ilbo, Hankook Ilbo, Kookmin Ilbo, Seoul Newspaper, Segye Ilbo, Maeil Economic Daily, etc. covered this news on the front page. Except for the Hankyoreh, which did not publish a newspaper that day, general daily newspapers, Maeil Economic Daily, and Korea Economic Daily wrote editorials on the situation. Most newspapers urged former CEO Lee to restrain himself, but Yoon Hak-kwan also called for a second-term retreat.

The Chosun Ilbo described the current situation as a 'Lee Jun-seok risk' in an article on the front page and said, "First of all, former CEO Lee seems to have entered an all-out war ahead of the court's injunction hearing on the 17th. It is because there is a high possibility that the future will be decided depending on how this first button turns out. The press conference was held during the daytime on Saturday, but the combined number of views on YouTube live broadcasts, including over-the-air and full-length broadcasts, exceeded 2 million.”

He also said he was preparing for a long game. The Chosun Ilbo said, "The variable is Lee's My-Way-style long-term war strategy," and said, "Regardless of legal judgment, he will build a tax base through online platforms, books, and the media and prepare for a long-term public opinion battle. In this case, even if the non-captain is launched in the future, the internal redness of the party may continue for a considerable period of time.”

The Chosun Ilbo said, “The third variable is whether or not the non-yun faction centered around some pro-Yu Seung-min circles within the party. However, the whole pro-Yoo Seung-min community has not shown any systematic movement to defend Lee,” he said. “The final variable is public opinion. This is because political issues are more likely to be decided by public opinion in the end. It seems that the supporters of the People's Power and the general public are still at odds," he said, showing conflicting reactions to former leader Lee, who was posted on the party's website after a press conference.

The president's office did not take a particular position on this situation, but the Dong-A Ilbo did say a word. An official from the presidential office said in an article on page 3 of the Dong-A Ilbo, "If you take an official position, it will only increase confrontation," but "CEO Lee seems to have lost his mind."

Most newspapers seem to have evaluated Lee's remarks at the press conference as harsh. In an editorial in the Chosun Ilbo, the Chosun Ilbo said, “After receiving a disciplinary action from the Party Ethics Committee for allegations of sexual misconduct, Lee was pushed out of the position as a representative of the party. It may have been unfair because of the fact that disciplinary action was taken even before the police investigation result was released, and that there was not a lot of controversy in the process of dismantling the leadership and launching the non-captain. However, it is something that a former party leader should not do for him to shoot arrows at the party and president he was a member of. He pointed out that he only sees an emotional solution full of anger and revenge.”

The Hankook Ilbo also said in an editorial, “President Yoon, who instigated a riot within the party with the ‘internal gunshot’ text, is in the process of taking the initiative and ending the situation.” The Segye Ilbo also said in an editorial, “The president’s office must also be awakened. It was not normal for the ruling party, which had achieved a change of government in five years and even won local elections, to form a non-captain system three months after taking power, even though it was not normal. Coordination with the party to solve problems cannot be found even if you wash your eyes. As rumored, if the presidential office postponed the resolution of the conflict because they thought that if only Lee was kicked out, it would be a huge mistake. It is time to come up with a remedy as soon as possible,” he emphasized.

Newspapers criticized Lee for not apologizing for his sexual assault case. In an editorial in the Hankook Ilbo, he said, "He has nothing to say about the allegations of 'condemnity payment and destruction of evidence', which provided the beginning of all of this. It is disappointing to see the lack of reflection or reflection despite the fact that the Party Ethics Committee's 'damage to dignity' was a reason for disciplinary action." The Kyunghyang Shinmun also said in an editorial, “CEO Lee shed tears while discussing the youth of Honam during the interview. He said it meant anger, but I am not touched by his tears, who have divided and hurt the gender generation and are being investigated for allegations of sexual misconduct.”

He also advised that the nuclei officers should retreat to the second line. The Segye Ilbo said in an editorial, “We cannot help but question the responsibility of Yoon Hak-kwan. It would be appropriate to retreat to the second line at the earliest. If you try to get the right to nominate for the next general election by planting your own person in the ranks ahead of the inauguration, it is far from closing the conflict within the party,” he pointed out. In an editorial from the Korea Economic Daily, he said, “I hope that CEO Lee will take time to look back on what is his fault before blaming others.” should retreat to Unless we do so, the cycle of conflict will never end, and the day may come when the power of the people will have to close the door.”

Kyunghyang Shinmun, analysis of regions and academic backgrounds from high-ranking officials in the Yun government
Double resurrection from TK Honam halved, 130 out of 190 'SKY'

On the 17th, ahead of the 100 days of the Yun Seok-yeol administration, the Kyunghyang Shinmun analyzed the regions and educational backgrounds of 190 of 45 public officials. As a result, the number of people from Daegu and Gyeongbuk increased significantly compared to the previous government, and the number from Honam decreased significantly. In particular, SKY (Seoul National University, Korea University, Yonsei University) said that the phenomenon of concentration has deepened.

In an article on page 3, the Kyunghyang Shinmun said, “On the 14th, on the 100th anniversary of the inauguration of the Yun Seok-yeol government, the Kyunghyang Shinmun analyzed the schools from which 190 high-ranking officials (power elites) from 45 institutions newly appointed or retained under the Yun Seok-yeol administration, and 130 of them graduated from SKY. appeared to have This means that nearly 7 out of 10 high-ranking public officials (68.4%) are from SKY. Seoul National University 44.7% (85 people), Korea University 12.1% (23 people), Yonsei University 11.6% (22 people)” reported.

He also said that he came from Chungam High School, the high school where President Yoon came from. The Kyunghyang Shinmun reported, “Chungam High School has five people, following Gyeonggi High School (6), which has produced the most high-ranking public officials under the previous government. Minister Lee Sang-min, Minister of Security Kim Yong-hyun, Ambassador to China Jeong Jae-ho, Rural Development Administration Director Cho Jae-ho, and Ministry of Science, Technology and Information and Communication Chang-yoon Lee, Director of R&D Policy Department, all graduated from Chungam High School. In the 2019 survey, there were two people from Chungam High School, including Yoon Seok-yeol, then Chief Prosecutor of the Seoul Central District Prosecutors' Office, and in the 2017 survey, there was one person, including Yoon Seok-yeol, then the Seoul Central District Prosecutor's Office."