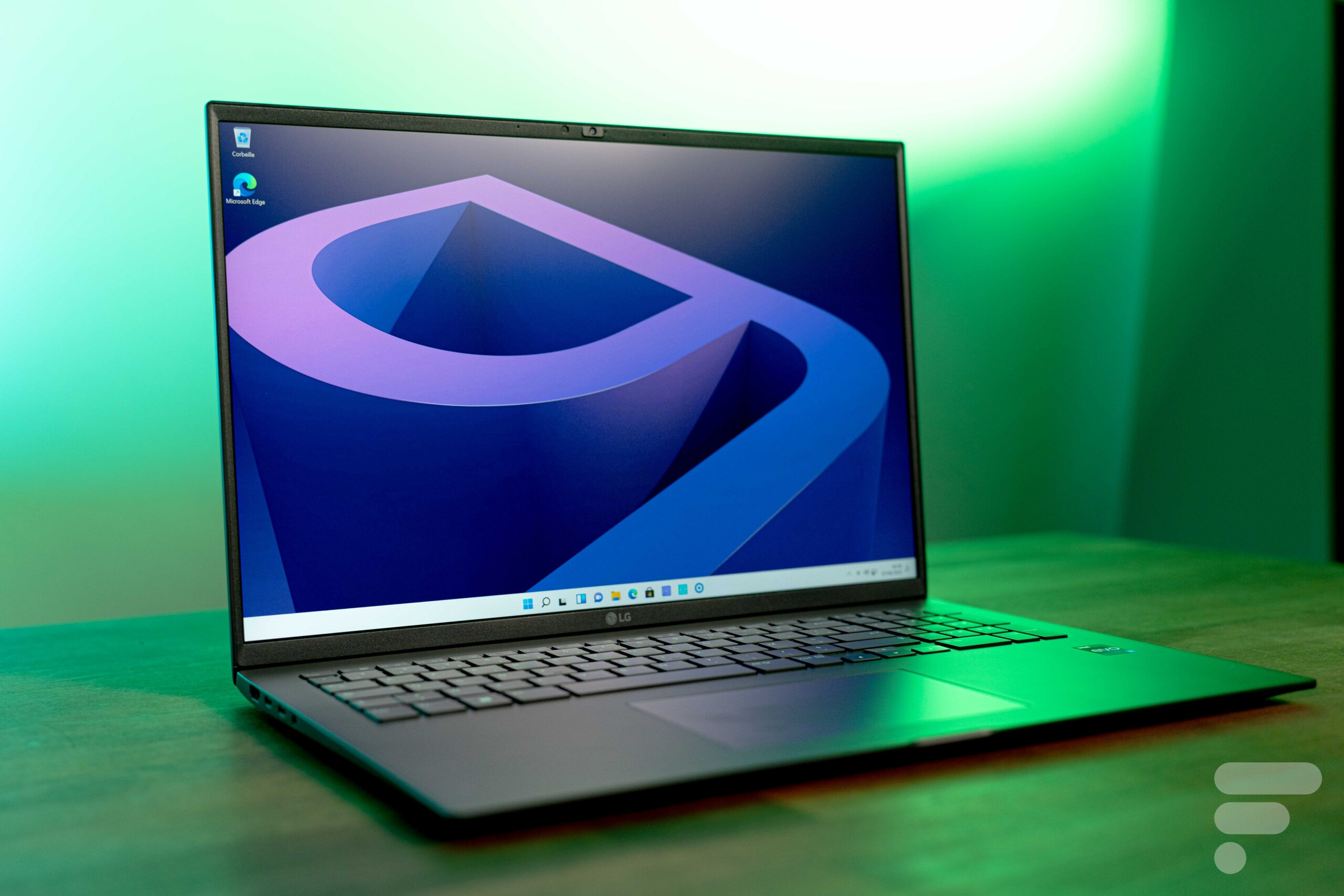 The LG Gram 17 returns with a new model in 2022. The promise is the same: a large diagonal for an impressively light weight. Is it once again held, without sacrifices?

The common law when buying a laptop is that the bigger the diagonal, the bigger the computer will be. Naturally, since the effective size of the material evolves, but also on the weight and the finishes. Generally, manufacturers take the opportunity to put more voracious configurations and more efficient cooling systems. At LG, we rather believed in making everything light and thin. The LG Gram 17 is probably the best example.

Do you still remember the time when manufacturers faked the rectangular aspect of their computers? We remember with a little smile how the laptops of the time hid their curves under the main frame, so that a photo seen from above suggested that the rectangle was perfect... while under its dress hid the most difficult parts. more unsightly.

The LG gram 17 is A+B proof that those days are long gone. We end up with a body almost unibody which maintains its clean lines in an ultra-light magnesium alloy shell that has now become the manufacturer's signature. However, old timers will remember Sony's latest Vaios, which more or less shared these same lines. Everything is understated, to the point that it's hard to highlight anything other than the little mirror-effect "gram" logo on the back. Only problem: fingerprints do not erase so easily.

What is really striking is more pragmatic than aesthetic. LG has once again managed to deliver a super lightweight design, at just 1.32kg on our scale, which is pretty crazy to pick up. It really feels like we're looking at a 13-inch ultrabook from 2015/2017, when it's a 17-inch. The wow effect never fades.

Who says 17 inches says full-size keyboard and touchpad. And on this point, no surprise: LG provides everything that is expected, with a typical keyboard that does not particularly exude quality, but allows the lightness of the device. Understand this last point: the keys have a rather banal stroke, neither excellent nor bad, the touchpad is full-size… but the body itself is so light that it forces a strange rebound with use. It's not a problem, but the sensation will take time to adapt to get back to your habits. The only weak point of this keyboard is its Enter key in American format, which is cut in half.

The touchpad of the LG gram 17 is very large and properly centered on the frame of the device. Made of glass and very wide, it is a joy to use.

Who says large format says developed connectivity. Here, we benefit from an HDMI port, two USB C Thunderbolt 4 ports and a combo jack port on the left. On the right, there are 2 USB A 3.2 Gen2 ports and a micro SD port.

The 17-inch format attracting professionals above all, you have to see this connection from this angle. And we can say that the LG gram 17 lives up to expectations, since it will be able to connect to tons of different devices, modern as well as old, and to a projector very quickly. The only disappointment: the SD card port, which we would have liked full format rather than limited to micro SD. 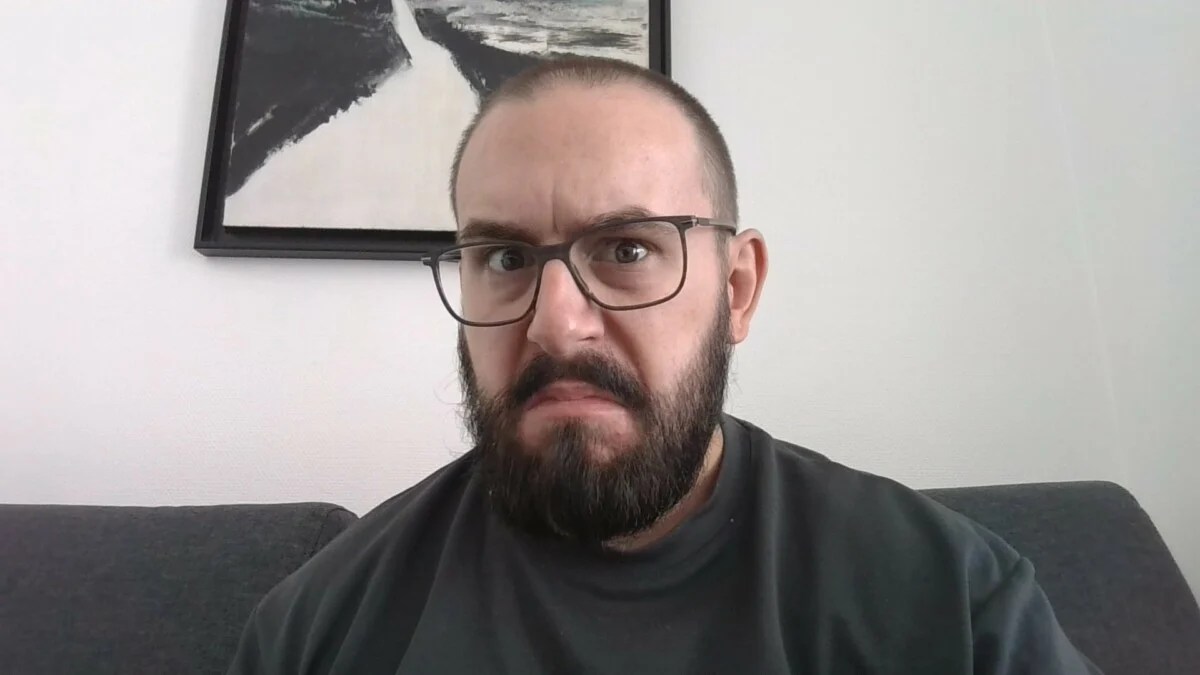 The LG gram 17 has a very basic, average 1080p webcam. It has at least the advantage of integrating an infrared sensor in order to be used for biometric facial recognition under Windows 11.

The computer's stereo speakers are placed under the chassis, the worst possible location, and it shows. If the highs are rather average, the middles are crushed and the bass non-existent. You won't transcribe your favorite music in the best conditions, but watching a short video on the go won't be a problem. The combo jack port and the Bluetooth 5.2 connection will be your greatest allies.

The LG gram 17 benefits from a 17-inch IPS LCD screen in 2560×1600 definition, i.e. a ratio of 16:10, with a matte coating to avoid reflections. This screen is not tactile and remains limited to a refresh rate of 60 Hz, which is not really shocking on a professional computer of this kind.

Under our probe and thanks to the DisplayCal software, after activating the "professional mode" in LG's options, we find that the panel covers 145.7% of the sRGB space, 100.4% of the Adobe RGB and 103 .2% of DCI P3 space. This with a maximum brightness raised to 382 cd / m². Considering that the manufacturer promises 99% of the DCI P3 and a maximum brightness of 350 cd / m², the word is kept.

It is on the colorimetric side that the LG gram 17 is not necessarily perfect. We measure an average color temperature of 6972K, which is colder than the video standard sought, as well as an average delta E00 of 1.97 against 1 sought. The difference is not too big, and the contrast ratio is excellent at 1497:1, but there are some imperfections in the rendering of blues.

All in all, it's all still excellent quality, and the LG gram 17 will remain well readable outdoors while delivering rich colors for creators. The most picky can easily recalibrate the slab to find the desired standard. The disappointment goes to the refresh rate, which deserves to be improved as competitors begin to look at 90 or even 120 Hz.

Windows 11, of course. But the "LG Update & Recovery" application is one of the good ones when it comes to keeping your computer up to date. Above all, "LG Smart Assistant" is among the best tools developed to make the fine configurations of the LG gram 17 extremely readable for ordinary mortals. It allows you to define your type of activity to automatically review, according to these preconfigured profiles, the performance and consumption of the computer as well as its ventilation curve. 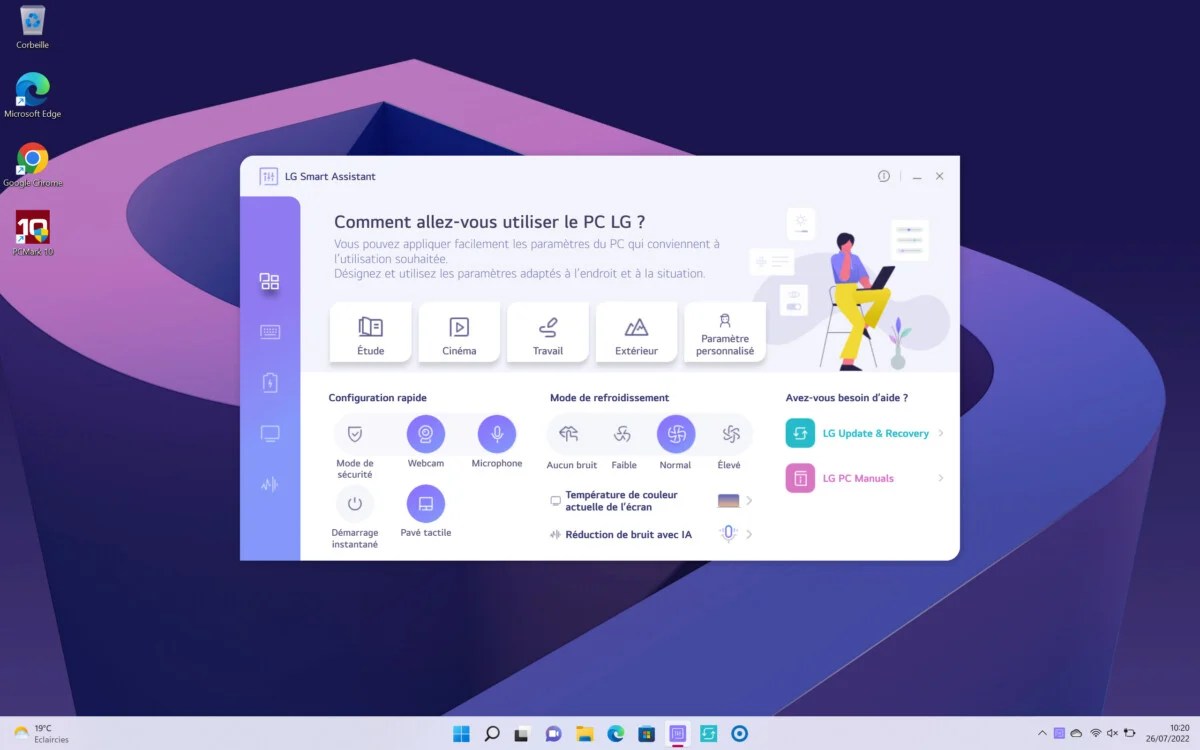 LG Glance is another interesting software developed by the manufacturer. This uses the on-board camera of the device to develop a whole suite of small services, such as presence detection or the fact of easily changing a window from one screen to another. However, the energy cost of leaving this camera on is not really worth the effort. The idea is appealing though. 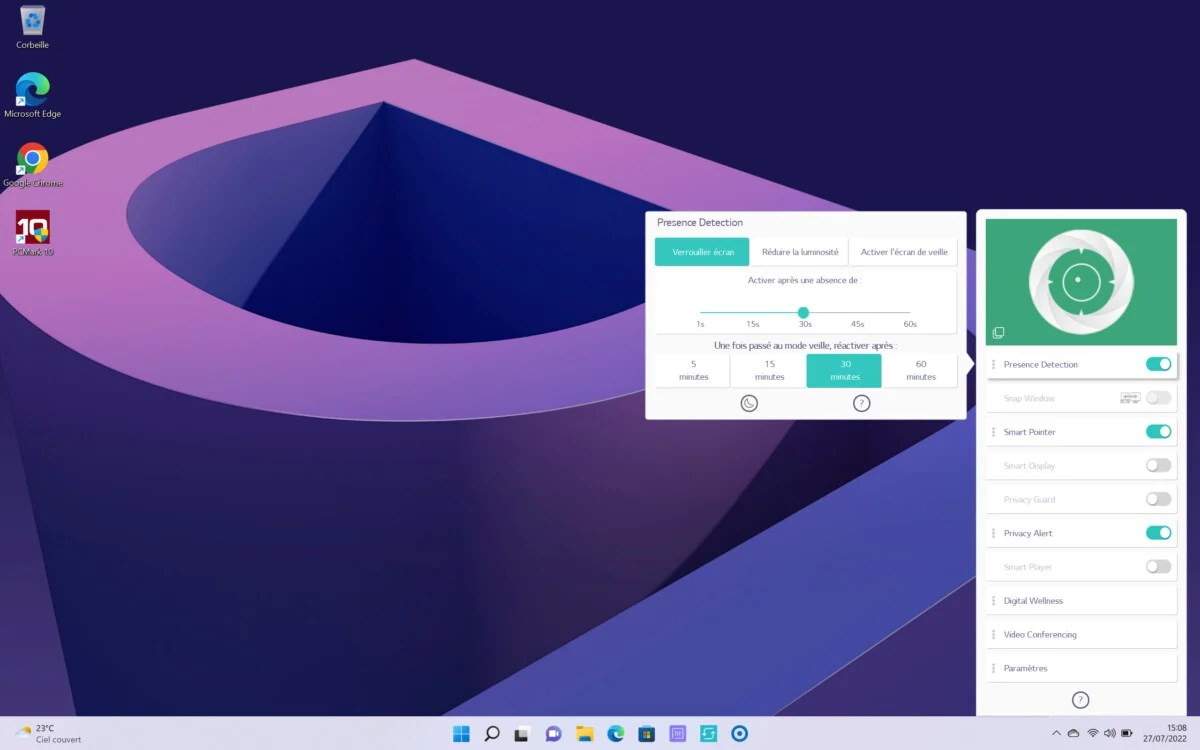 The real disappointment is to find again many pre-installed adware, including McAfee who likes to open large notifications for its offers. On such a premium computer, you shouldn't have to uninstall so many unnecessary apps.

In our test configuration, the LG gram 17 integrates the Intel Core i7-1260P. It is the latest 12th generation Intel SoC mainly found on 13-inch ultrabooks, which integrates 4 Performance cores and 8 Efficient cores for 16 threads, and can turbo up to 4.7 GHz. It is coupled here with 16 GB of LPDDR5 RAM and 1 TB of PCIe Gen 4 storage.

No significant concerns regarding the performance of the Core i7-1260P. This one offers us scores equivalent to the Zenbook 14 and Galaxy Book 2 Pro tested previously with a similar configuration, both in multi-core (1228) and single core (7763) on Cinebench R23 or on PCMark 10, where the computer makes a score of 5242 equivalent to the others.

It is especially its integration which can surprise. Don't forget that here, LG has chosen lightness and finesse above all. It should therefore be emphasized that this large PC will precisely have performance equivalent to ultraportables in the 13-inch category, which is not necessarily the goal instinctively sought on a large format. So keep in mind that the LG gram 17 is for those who want a large screen that can easily be transported, not workaholics.

On the storage side, we can note that the Samsung SSD integrated here and already seen in another configuration does not quite work at full speed. However, we can understand this slight sacrifice to manage the heating as much as possible.

Because yes, on the heating side, the LG gram 17 is exemplary. Despite this small size and a barely audible fan, it does not exceed the 42°C felt on its hull. What's more, these elements are away from the user, keeping the laptop comfortable at all times. Excellent thermal management, therefore.

The LG gram 17 benefits from a large 80 Wh battery, which is recharged by a 65W power supply in USB type C using the Power Delivery standard. As always with the latter, you will therefore be able to use any alimentation Power Delivery to regain some juice, which is the greatest strength of this standard to recover some percentages in the worst situations.

LG promises up to 17.5 hours of battery life for its laptop. In fact, on a typical working day for a journalist (a bit of YouTube, music, tabs galore and the screen brightness set to 50%), we will rather count around ten 'hours. It's already very good and gives a full day of use without being scared.

It is therefore unfortunate that the manufacturer makes its measurements at 150 cd / m² with Wi-Fi disabled and only in video playback, as its official site reveals by following the asterisks. LG, this usage didn't really exist before and is even less relevant in the age of streaming.

Be careful not to confuse it with the configuration under Intel 11th generation, which also bears the reference "17Z90Q".