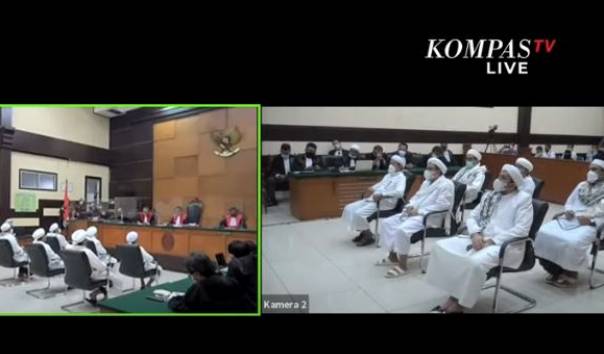 JAKARTA, KOMPAS.TV - The judges of the East Jakarta District Court assessed that there was discrimination in taking action against violations of health protocols or health protocols during the Covid-19 pandemic.

Because, according to the judge, there were a lot of crowds who ignored health protocols. But it is not legally processed at all.

Also Read: Legal Counsel Predicts that Rizieq Shihab in the Petamburan Crowd Case will be released in July 2021

This was conveyed by the panel of judges at the East Jakarta District Court at the verdict or verdict against Rizieq Shihab in the crowd case in Megamendung, Bogor, West Java.

The panel of judges conveyed this in response to a number of questions posed by the defendant Rizieq Shihab, and his attorney who questioned the case.

"That there has been an inequality of treatment or discrimination that should not have occurred in the Unitary State of the Republic of Indonesia, which glorifies itself as a state of law, not a state of power," said judge Djohan Arifin in the trial reading the verdict at the East Jakarta District Court, Thursday (27/5/2021). .

Also Read: Sentenced to 8 Months in Prison, Rizieq Shihab and 5 Defendants in the Petamburan Crowd Case Ask for Thoughts