They return to the island committed to heart patients 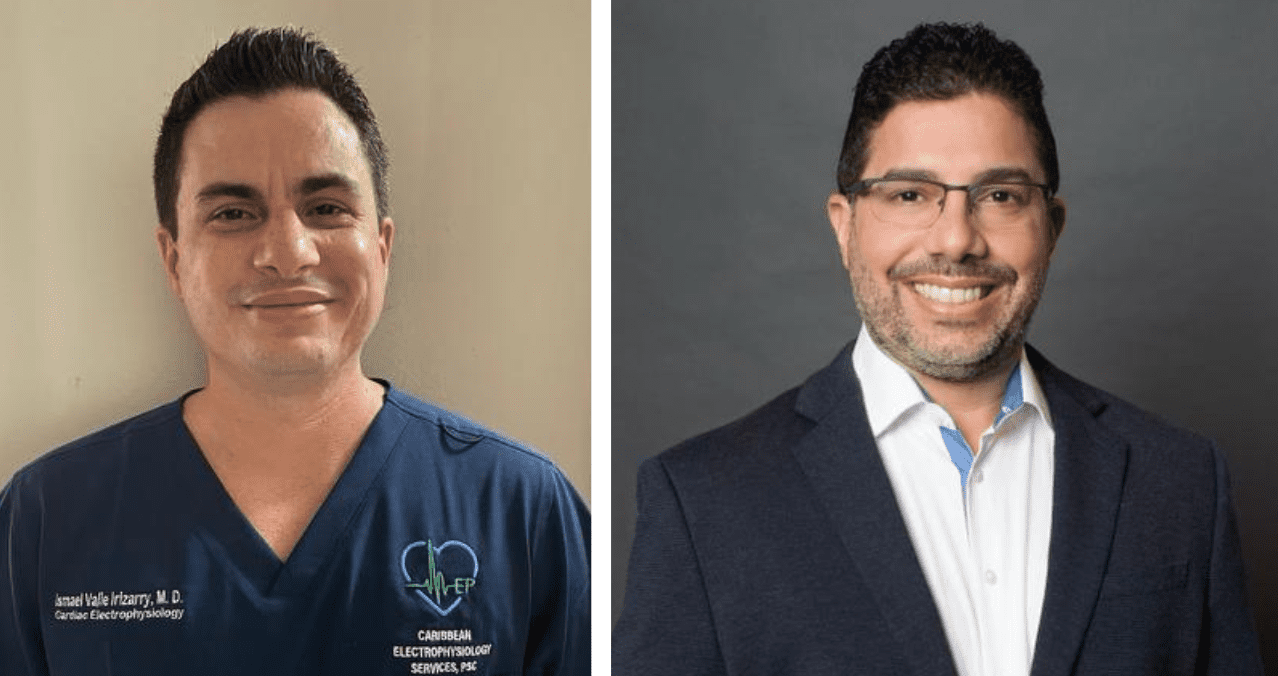 Puerto Rican doctors return to the island to provide patients with care based on new technologies and innovation.

At a time when there is a shortage of medical specialists in Puerto Rico, some Puerto Rican doctors join forces to return to the country and offer patients on the Island innovative procedures and technologies that help them manage their cardiovascular conditions. This is the case of electrophysiologists Helder Hernández Rivera and Ismael Valle Irizarry, who together offer medical services to several hospitals in the southwestern area of ​​the country.

Both doctors did their cardiology internship at the Veterans Hospital in Puerto Rico and after completing a fellowship in electrophysiology (a field of medicine that studies the electrical activity of the heart) at the University of Texas Southwestern Medical Center, they returned to Puerto Rico to serve their people and somehow give back everything they have learned so far.

Few electrophysiologists on the Island

They bring new and more complex technology and procedures

For Dr. Valle Irizarry, on the other hand, the return to the country not only has to do with the limitation of doctors within his specialty, but also with bringing the practice of complex procedures or new technology that were not performed as much locally. “There really is a need to also bring new technology, new procedures that are practiced in the United States and that not everyone performs in Puerto Rico. There are complex ablations and other device procedures. Such as epicardial ventricular tachycardia ablations with an epicardial origin, which is the outer layer of the heart. Devices such as what is called "physiological passing". And we understand that it is a new way of implementing pacemaker technology and that it helps in the well-being of patients and has shown a positive effect on the patient's symptoms and the recovery of cardiac function," he explained. the doctor from Mayagüez and who is a newcomer to the country after two years of training in electrophysiology in Dallas, Texas.

These reasons were what motivated Dr. Hernández Rivera to create a corporation under the name of Caribbean Electrophysiology Services in 2020, providing electrophysiology services to Hospital San Lucas and Hospital Damas, both in Ponce, and to the Mayagüez Medical Center. “As the doctor very well said, one of the intentions of us joining together is to bring complex procedures that many patients need, especially ablations, which is the treatment for cardiac arrhythmias. Ismael and I have already done several complex procedures, he just arrived, and we have had a very positive experience in terms of patient health. Epicardial ablation, which is done for patients with ventricular tachycardias that do not respond to medications, is a type of ablation that until today has not been done in Puerto Rico and we are trained to be able to carry out this type of intervention if necessary in any patient”, detailed this specialist, who added that they soon hope to offer their services at the La Concepción Hospital in San Germán. And although they currently attend hospitals in the southwestern area, they receive patients from all over the island.

On the other hand, these doctors assure that the academic preparation in Puerto Rico is excellent, but that economic and technological offers sometimes influence health personnel to carry out their studies and medical practice outside the country. “The training of the doctors here in Puerto Rico it's excellent. What happens is that offers come from the United States, the quality of work there tends to be better. The pay is better. I would say that the situation here with medical plans is the most difficult for a doctor to stay on the island. But here we have the capacity to practice good medicine. Perhaps we don't have the technology and the facilities that we had back in the United States, but as I tell people with little, we do a lot. Simply having the intention, having the desire and doing it out of vocation, that is the most important thing,” said Hernández Rivera.

Meanwhile, Valle Irizarry acknowledged that cardiology can be practiced in Puerto Rico, but unfortunately the electrophysiology subspecialty within the cardiology area does not exist as a program in the country. “That is the primary reason why we have to move to other states of the American nation in order to be able to train in electrophysiology and acquire the necessary knowledge to be able to return to the island and provide the services that the population deserves and needs. With regard to technology, well that's correct, we don't have the same technology in the United States, but there are hospitals (here) that provide us with this technology, they make and try to make the effort to get what we need to provide you with the best service and quality of care. service to patients in Puerto Rico”, he added.

Call for the return of more doctors

Doctors who are still training or who are about to graduate are encouraged to return to serve their country, form medical groups and even take advantage of the tax incentives offered by the government to encourage the return of the medical class to the country. “Puerto Rico has a huge health crisis and we realize more every day. And there is a tremendous need for both doctors and specialists. That they do not see going to the United States as the solution to the problem. If the country gave them the opportunity to practice medicine here, do their residencies, their internship and train as doctors, even if they have to go there for a while to do their training or subspecialty, they should consider returning to the country to return that favor and contribute to the medicine that is so necessary every day here on our Island,” said Hernández Rivera. Valle Irizarry meanwhile pointed out that “medicine is moving to form groups of doctors from different specialties or subspecialties, which also gives you a certain confidence to return. And there is also the preferential tax rate of 4% that really helps in the finances and well-being of the doctor”.