Tottenham are still behind Chelsea 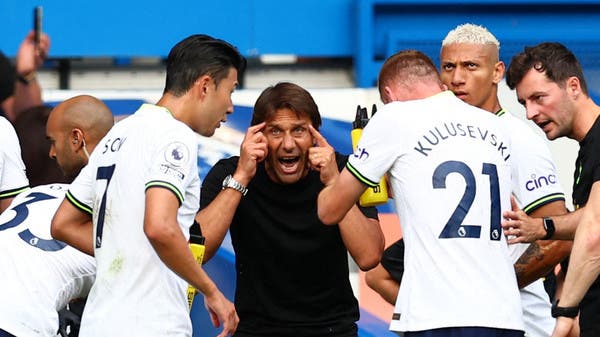 Tottenham Hotspur manager Antonio Conte admitted his side still have to close the gap with Chelsea after the 2-2 draw, amid a tense atmosphere at Stamford Bridge in the Premier League on Sunday.

With Harry Kane's last-gasp goal, Tottenham snatched a point after three consecutive defeats against Chelsea without scoring a goal since Conte took over in November, which means progress.

"It was a tough, tough match for us, but you know that coming here to play Chelsea at home is always difficult because it's a really good team," said Conte, who twice quarreled with Chelsea coach Thomas Tuchel during the match and both were sent off after the final whistle.

And he added: But at the same time, if you compare this match to last season and maybe six months ago, when we played three games without real performance because the superiority was clear to them, today Chelsea showed that he is better than us, to be honest.

He continued, "We can be better, but we also scored two goals while we did not score in the previous three matches. We got a point and showed a strong character because the players wanted to fight until the end."

Conte preferred not to go into details about his clashes with Tuchel, and the second quarrel occurred after the end of the match after the German coach offered a violent handshake.

Conte explained: I am not a negative person, of course, and if I see hostility, my response will be hostile, but I repeat .. This is not a problem, the most important thing is that the match was great between two teams competing strongly and we scored a really important point.

And he continued: It was important for me because I do not like losing three games against the same coach, I hate defeat and you know very well that I am trying to transfer my mentality and my passion to the players, you can be a technically and tactically brilliant player, but you also need ferocity to fight for something important.

He concluded: I think we started working on this matter and today I am happy with the players' desire to fight to the end despite the difficulty of the match.