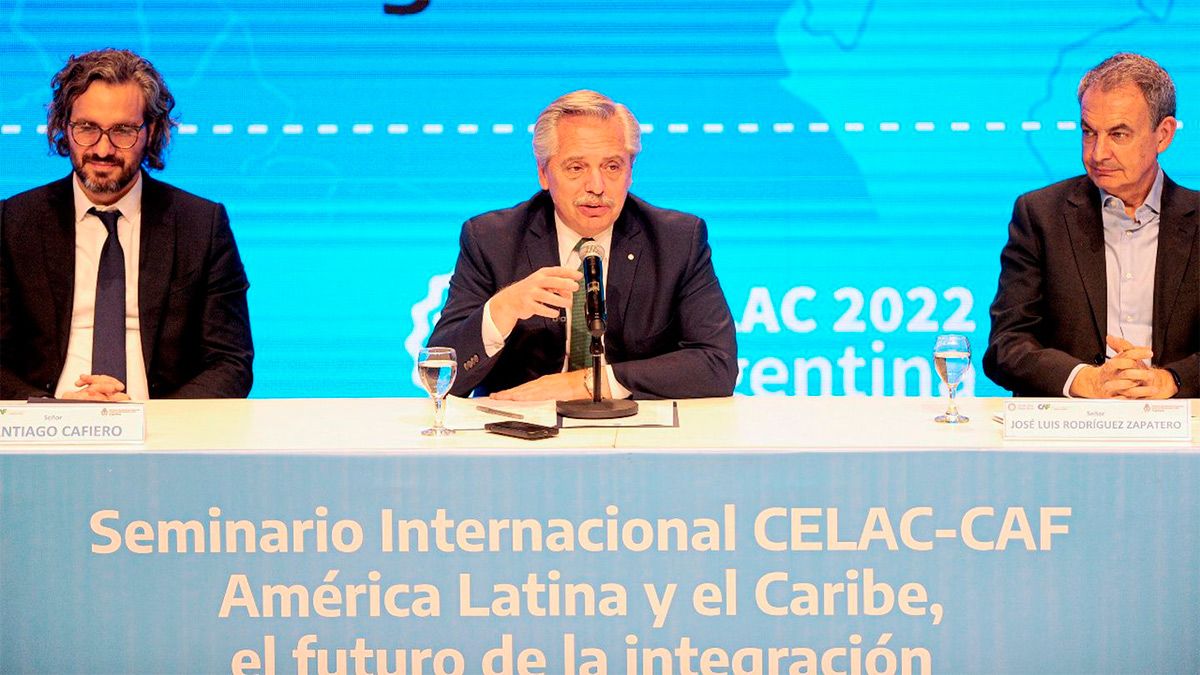 The president spoke at a seminar of the organization that was held this afternoon at the Kirchner Cultural Center.

President Alberto Fernández, in his role as pro tempore leader of the Community of Latin American and Caribbean States (CELAC), called today to "institutionalize" the organization and asked to "end" the blockades on Cuba and Venezuela, during the closing of the seminar conference "The Future of Integration: Unity in Diversity", in the presence of Latin American and Caribbean leaders at the Kirchner Cultural Center.

"It would be good for Argentina to start the process of institutionalizing CELAC. So far we are a group of countries that talks and analyzes, but does not make joint decisions and it is time for us to do so," said the president.

And he noted that, to materialize this initiative, he resorted to the "memory of Unasur (Union of South American Nations)", so that CELAC "acquires another strength, another dimension and also represents us adequately, which allows us to make a community decision " and that it is not left to "the discretion of each country".

"We must work together, so that the blockades end on this continent," Fernández said, in a sentence followed by applause from the audience.

"We have two countries blocked and that is inexcusable," he added, referring to the situation in Cuba and Venezuela.

Along these lines, the president called for "making the political decision" to "take advantage of peace and unity to achieve development and social justice."

"We must put our Latin American rights first in order to achieve those goals, which were dreamed of by others before us: San Martín, Bolívar, Sucre, Hidalgo, Martí. Let's copy such great beings," he exhorted.

The Argentine president reviewed the international context of the last two years, marked by the Covid-19 pandemic and the war in Ukraine.

"A singular continent, which has had to face the dilemma of unity at a singular moment in the history of humanity", which is why he wondered if the countries of the region do not have the "obligation and ethical duty to do a better world".

"The 21st century has already given us the first catastrophe, the pandemic," he explained, adding that "a virus" exposed "the weakness of the economic system in which we live."

"We still don't know how many have died in the pandemic, according to the United Nations between 6 and 10 million people," he recalled, noting that "it took between one and two holocausts; it's a lot of people, it's an immense tragedy."

And he expanded: “We all live it equally because, when the pandemic appeared, the world did become equal”, because “those from the north, those from the south, died, the rich and the poor died.”

"All of us who are here are survivors of the pandemic," said the President, to ask himself: "Don't we have an obligation to make a better world? Don't we have an ethical duty to make the world a different one?"

It was answered: "I do not want to go back to being the world that it was, I want the world to be another, because the pandemic exposed the inequities that existed in the world."

"Suddenly a virus imperceptible to human sight was capable of bringing down economic empires and put the bonds of the most powerful countries in check," the president stressed, adding that Covid-19 "hurt more deeply those of us who live in the southern hemisphere".

He also pointed out that "there is a kind of passive promoters of the war between Ukraine and Russia, who do not send troops but send weapons and let the conflict escalate."

"This is today's world, which will surely bring a new geopolitical reality that we will not be able to dominate, but we can dominate the path that our continent takes. We can make the decision to unite to face any bad moment," Fernández stressed.

"We are all waiting for this conflict to end quickly and we do what is within our reach, because it affects all of humanity," he remarked, adding: "I aspired to reach a solution and that solution does not seem to come immediately." .

In that sense, he indicated that the region has "a great opportunity and an enormous challenge" ahead, which consists of "supplying renewable energy and food in quantity" to the rest of the world.

"Between Chile, Bolivia and Argentina we are 60% of the lithium that the world is going to need, we have the perfect conditions to develop wind energy, green hydrogen, solar energy", he exemplified and remarked that "we have to stop exporting raw material and industrialize it ", because the region has "all the scientific and technical conditions to do so".

In addition, he stressed that Latin America has "a great advantage" because "it is a territory of peace, here there are no countries armed for war," although "we are in the most unequal continent in the world," he warned.

"If we add unity to the peace we have, we give it an institutional framework and we put it at the service of the region, we have a magnificent opportunity to make it a privileged continent," the President remarked.

For his part, the former Uruguayan president, Pepe Mujica, sent a recorded video with his greetings, in the same way as the president of Mexico, Andrés Manuel López Obrador, who highlighted the "correct appointment of Alberto Fernández" as president pro tempore of the Celac, whom he also described as "a man with a good heart".