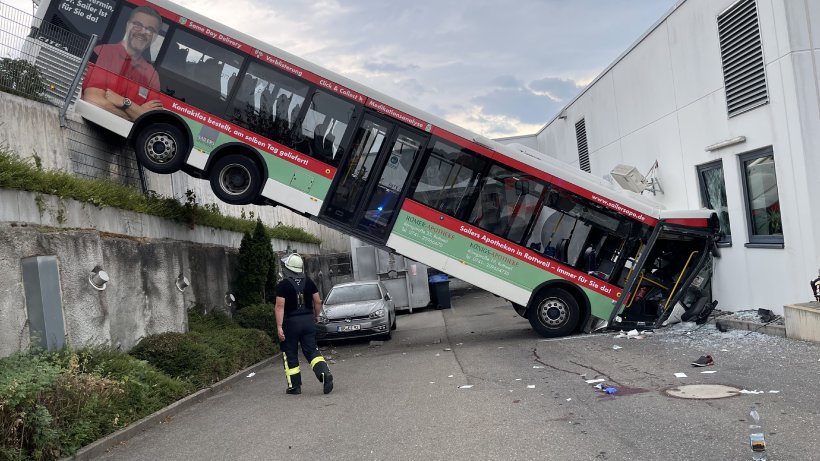 In Baden-Württemberg, a bus crashed into an Aldi branch. A photo gives an idea of ​​the forces that were at work in the accident.

The rear part of the bus is still hanging on the wall: a photo shows the force with which a bus drove over a slope in Herrenberg in Baden-Württemberg and then crashed into an Aldi branch. In the accident, the bus driver was seriously injured and taken to a clinic by helicopter, the police said.

Before the bus crashed down the slope into the wall of the house, the vehicle collided with a mobile home. The 68-year-old camper driver and an employee of the discounter were also injured, according to the information. The woman was therefore in the lounge at the time of the accident when she was hit by the shards of a broken pane of glass.

The accident happened shortly after the bus left the bus station in Herrenberg near Tübingen on Friday. The vehicle crashed through a fence and slid down an embankment about eight meters deep before coming to a stop against the outer wall of the grocery store. The front was smashed. The wreck should be salvaged with cranes.

According to an initial estimate, the officials put the damage to property at 115,000 euros. Experts should help in the analysis of the accident. A blood sample was taken from the bus driver. (bekö/dpa)

This article first appeared on morgenpost.de.