An active transfer window for the construction of a project 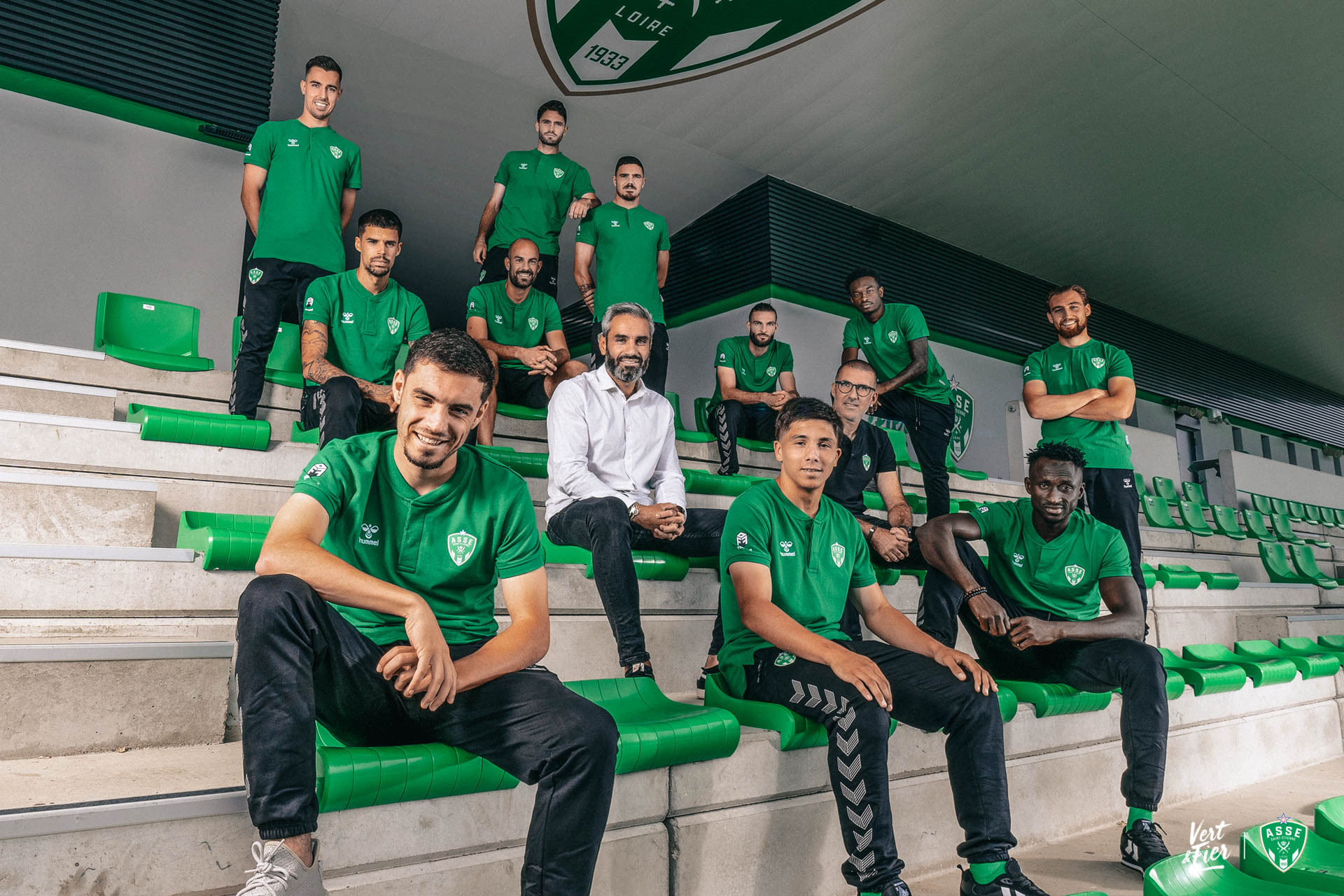 On Friday, June 3, Laurent Batlles, newly appointed new coach of the Greens, poses on the cover of the official website with Loïc Perrin, the Sports Director from Saint-Etienne. The former midfielder with around 600 professional matches, Green from 2010 until 2019, went from player to coach of the reserve team, returns to Forez to initiate a project within a club marked by relegation, recorded only five days earlier. If he knows ASSE inside out, he also already has strong affinities with the sports management in place.

Only a few days later, Emmanuel Da Costa, assistant coachet Romain Brottes, video analystjoin him to bring their skills while Jean-François Bédénik is promoted to coach of the goalkeepers of the pro grouphe who had officiated at the training center since 2017.

With the restructuring of the technical staff in less than two weeks, the merger of the recruitment unit and the creation of a performance unit focused on data analysis, the sports management is laying the foundations for its new project.

Loïc Perrin and Laurent Batlles quickly define the sporting strategy of the transfer window opening its doors on June 10 to meet the objective of a rise in the elite in two years. The recruitment criteria are defined, the positions targeted and the number of players fixed to begin the constitution of a new group. This first phase of construction is necessary to feed a stated ambition.

To respond to the departure of fourteen players at the end of the contract1to the transfers of five other2 and loans of three elements3, the recruitment and performance units analyze more than a thousand profiles to select around a hundred. Negotiations with more than fifty players have been started.

In addition to the three loan returns (Charles Abi, Jean-Philippe Krasso and Sergi Palencia), eleven players are joining AS Saint-Étienne this summer; these reinforcements at each line being able to compose a complete team. The professional squad was also supplemented by the promotions of five players from the Saint-Etienne training center. Thus, Ayman Aiki (17), Abdoulaye Bakayoko (19), Antoine Gauthier (18), Louis Mouton (20) and Noah Raveyre (17) are now part of the locker room.

Matthieu Dreyer (33 years old, Goalkeeper, 106 games, FC Lorient): With 14 seasons marked in particular by 66 matches in Ligue 1 Uber Eats, the doorman arrived to support and participate in the development of goalkeepers trained at the club. He wears the number 1.

The words of Laurent Batlles on his arrival: "Matthieu is an experienced goalkeeper who has known Ligue 1 and Ligue 2. He will bring us his maturity and his serenity, especially at the level of the group of goalkeepers which is quite young. His arrival will offer us an additional solution in the event of injury or suspension in a championship that we know is very long."

Anthony Briançon (27 years old, Defender, 211 games, Nîmes Olympique) : He was the first player to join ASSE this summer. The former Nîmes Olympique defender joined Forez with determination and ambition. He is number 23 in the Saint-Etienne squad and has already worn the captain's armband in his first matches in Green.

Laurent Batlles: "Anthony knows Ligue 2 BKT well, he is an experienced player, a leader of men. Athletically and technically he is a top quality footballer. Anthony is a real leader, he will be important on and off the pitch."

Laurent Batlles: "Jimmy Giraudon is a seasoned Ligue 2 BKT player. It is important for us to have elements who are experienced in this championship, who know its hardness and the humility it requires. I know him well and he knows what I expect of him. He will also be a leader of men."

Léo Pétrot (25 years old, Defender, 25 games, FC Lorient): Like Dylan Chambost who arrived earlier this summer, he already knows ASSE very well, for which he wore the colors of the U17s in the Reserve. Transferred from FC Lorient, he can play in several positions within the defense with his number 19.

Laurent Batlles: "Leo is a player I know well. He was one of my captains when I coached the Greens professional reserve. Since then, he has become hardened thanks to many moral qualities that have allowed him to earn his place in Ligue 1 Uber Eats. Getting it back is very important. His versatility, which can allow him to play in the center or in a full-back role, will be very important for us this season."

Laurent Batlles: "Dylan had left ASSE without having really played with the professionals, he will now have the opportunity. He is a very technical player with a good vision of the game, capable of giving good balls to the attackers. He will be very important in our project, especially since he knows my way of playing perfectly. It will be a little more for him, as for his teammates."

Victor Lobry (27, Midfielder, 81 games, Pau FC): Player accustomed to Ligue 2 BKT, which he discovered under the colors of Pau FC, the 27-year-old midfielder is now Green! He wears the number 22 in the Saint-Etienne midfield.

Laurent Batlles: "Victor was one of the best players in Ligue 2 BKT last season in my opinion. He has very strong physical qualities that allow him to repeat efforts. It will be valuable for the collective, on and off the pitch."

Mathieu Cafaro (25 years old, Midfielder, 108 games, Standard de Liège - Belgium) : Trained at Toulouse FC and revealed with the Stade de Reims, he also has a record that speaks for him in Ligue 2 BKT where he was crowned Champion during the 2017-2018 season. New number 18 of the Greens, he is loaned with option to buy by Standard de Liège.

Laurent Batlles: "Mathieu is a player I have known since his first steps in Toulouse. He has technical and athletic qualities that will be invaluable to the team. He is an element capable of finding the right pass, he has a real quality of center. He too knows Ligue 2 BKT very well and will be able to fully understand the requirements of this championship."

Laurent Batlles: "We are very happy to welcome Benjamin. He is a player who will bring us a lot of technique in midfield, races and competition over time. It is despite everything a young element who will need to harden up in Ligue 2 BKT."

Thomas Monconduit (31 years old, Midfielder, 240 games, FC Lorient) : Last recruit of a busy August 29, the 31-year-old midfielder, well known to lovers of Ligue 1 Uber Eats and Ligue 2 BKT, finds a championship he knows well. Like many of his new teammates, he experienced a rise with Amiens in 2018. He now wears 7.

Laurent Batlles: "Thomas is a player with a lot of experience. He will bring us serenity on and off the pitch. He is a player who knows Ligue 1 Uber Eats as well as Ligue 2 BKT and who has experienced a rise with Amiens. Compared to the many young people we have, we needed a slightly more seasoned player to support them. He is also a versatile player, able to play in several positions in the midfield."

Lenny Pintor (22 years old, striker, 41 games, Olympique Lyonnais): Young 21-year-old striker, the French international U16 to U20, with rich international experience with the tricolor jersey, joined ASSE at the beginning of August to wear number 15.

Laurent Batlles: "Lenny is a hard-hitting player, who goes fast and is comfortable with both feet. Of course, he still needs to improve in certain areas, but he is a player who will bring us versatility and also rotation. We are looking for players who are hungry and he wants to prove a lot of things."

Ibrahima Wadji (27 years old, striker, 140 games, Qarabag FK - Azerbaijan): New striker of the Greens, with his number 25, the Senegalese arrives from Qarabag FK and is preparing to play his first minutes in France, with the Green jersey.

Laurent Batlles: "It was important to recruit a deep player, fast and capable of scoring goals like Jean-Philippe Krasso currently. Ibrahima runs a lot, makes a lot of calls and will help us perform this season. Especially since he is a player who knows the top level very well, like the many European Cup matches he has played."