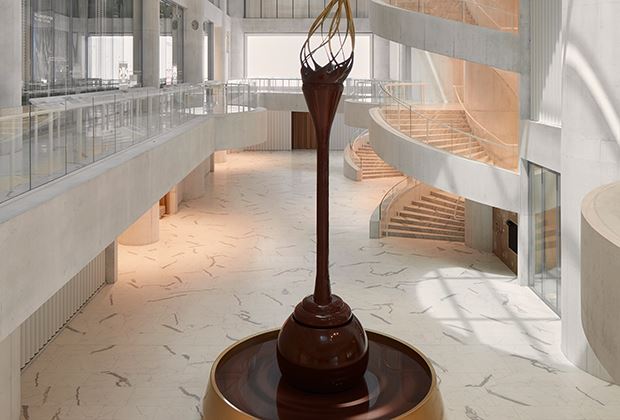 Even in the bitter times of the pandemic, Lindt & Sprüngli is holding on to sweet dreams. The traditional group inaugurated the largest chocolate museum in Switzerland in Kilchberg on Thursday, which will open on Sunday.

The "Lindt Home of Chocolate" is a milestone for Switzerland, which has always been a country of chocolate pioneers, Lindt & Sprüngli Chairman of the Board of Directors and President of the Lindt Chocolate Competence Foundation, Ernst Tanner, told the media on Thursday. The 20 meter high building with the area of ​​a soccer field was erected in just 36 months.

Tanner was visibly proud to be able to present the imposing building to the media and invited guests at the pre-opening. Tennis star and Lindt ambassador Roger Federer and Federal Councilor Ueli Maurer were also present.

The whole project took seven years. The slope behind the building on the SBB tracks had to be supported with 250 tons of steel. The pit was 13 meters deep. Despite the dimensions, construction went smoothly overall, Tanner said. The building was finished in November 2019 and the interior work could begin. The opening date was planned for May 7th. But then came the corona pandemic, which led to a month-long delay.

However, the emphasis is on "freestanding". Because in Austria there is an even higher well in Allhaming, but it is not free. There, 1.5 tons of chocolate cascade down from a height of more than 12 meters. The chocolate fountain in Kilchberg pays homage to the Lindor sphere, Tanner said. Under a rain of gold confetti like at Champions League victory celebrations, the huge curtain of gold threads that covered the fountain fell.

The Chocolate Experience Tour begins in a room that takes visitors into the rainforest of Ghana with cacao trees and jungle sounds. Here you can find out how the cocoa for Lindt chocolate is planted and extracted.

The next rooms provide information about the history of chocolate, which is 5,000 years old and began in South America. There, however, cocoa was only consumed as a drink. With the conquest of Latin America by the Spaniards, cocoa came to Europe, where it became a fashionable drink for the nobility.

According to Ernst Tanner, cocoa only became a treat for the palate thanks to the inventive talent of the Swiss chocolate pioneers from the middle of the 19th century. The theme world of the chocolate pioneers shows the inventions of François-Louis Cailler, Daniel Peter, Philippe Suchard and Theodor Tobler. This is how Peter created the milk chocolate.

Rodolphe Lindt from Bern invented melt-in-the-mouth chocolate in 1879. Because of its shape, he named the finishing machine “Conche”, which is derived from the Greek word for shell. In 1899, Rodolphe Lindt sold the conching process to Johanne Rudolf Sprüngli from Zurich, who founded the chocolate factory in Kilchberg.

Adventure tour for mind and senses

The museum not only offers nourishment for the mind, but also for the senses. It shows the production of chocolate from the bean to the cocoa mass to the chocolate mass to the finished bar. Visitors can also taste all kinds of chocolate. The museum also contains a Chocolateria for chocolate courses, a Lindt café and the largest chocolate shop in Switzerland.

A test facility for the production of chocolate was also installed. New product creations can be tried out here. One wants to bring more innovations to the market in the future, said Tanner. If you were to do the tinkering on the large systems in the factory, there would be a two-day break in production.

Switzerland has the best chocolate

The test facility is also open to startups, Tanner said. It is also used for further training in the industry. This is intended to strengthen Switzerland's top position in the chocolate industry.

"You can be anywhere in the world you want. We all know that Switzerland has the best chocolate," said Federal Councilor Ueli Maurer in his speech. “This is the only medicine I take regularly. I am of the opinion that Swiss chocolate should be covered by health insurance companies," said the Minister of Finance, laughing. He clearly eats more than the average 10.4 kilograms that are consumed annually per capita in Switzerland.

The museum was not cheap: more than 100 million francs were invested. Tanner expects 350,000 visitors per year. The museum does not have to make a profit, which is why the admission prices have been kept relatively low. "We expect to break even."

In view of the size of the project, scoffers are already saying that Tanner, who has been at the head of the group for 27 years, wanted to erect a monument. Tanner rejected this: «I don't need a monument. If I have a memorial, it's the performance of Lindt & Sprüngli over the past 27 years," he told AWP.