In the capital of Mississippi deprived of water, the army to the rescue 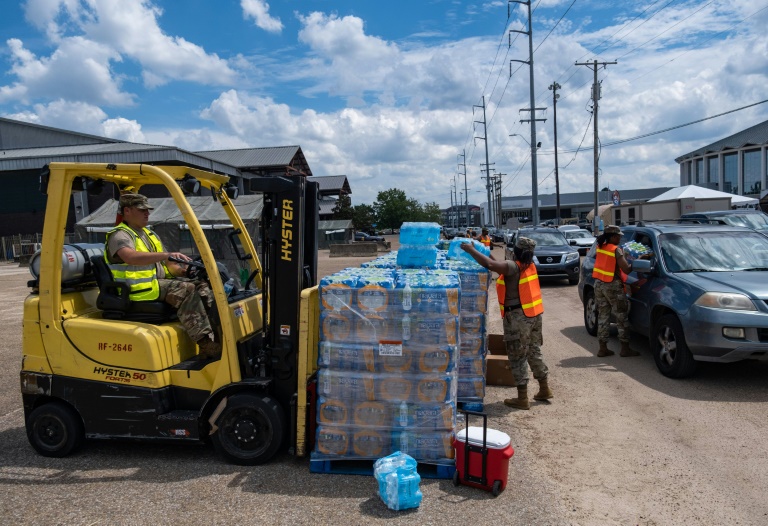 Large trucks loaded with hundreds of thousands of bottles of water line the plaza of a sprawling fairground in Jackson, Mississippi. To unload them, American soldiers in fatigues perform a continuous ballet, in the middle of forklifts and backhoe loaders.

Here is how the most visible aid offered by the National Guard is deployed, supposed to respond urgently to the acute crisis affecting the inhabitants of the capital of this southern state.

After devastating floods, much of Jackson's water system was out of service, with no pressure in the lines. Those still functioning provide a brownish liquid, too unfit to be drunk, even boiled.

"In my house, the water is flowing very slowly. It's a horrible situation for the whole city of Jackson, you know, not just individually," 55-year-old resident Mary Jones told AFP.

"Nobody seems to know how to solve the problem," continues the woman, who is widowed and disabled.

"But now that the White House is involved, I hope we can have clean running water again, because it's been going on for years now. And it's really ridiculous to have to go through this, as a than citizens," she said.

It is true that Jackson's situation has made Washington react. President Joe Biden has promised all possible federal means to the State of Mississippi.

Major repairs are underway to restore pressure in the network. But, for the time being, the life of the inhabitants rests on these plastic bottles, stored on pallets.

Each resident is given two packs at the free distribution locations.

"I'm grateful that the military and others are trying to help us," the 41-year-old added.

Mary Jones, she praises the spirit of mutual aid: "You have to sacrifice yourself for your neighbors. That's how we do it in Mississippi".

She explains that she goes to several sites to collect bottles for several elderly people in her neighborhood who have no means of transport.

Exercise requires patience. Long lines of cars formed in Jackson, a town that evokes one of the worst health scandals in American history, that of the lead-contaminated water in Flint, Michigan, in the past decade.

"I wonder if there are dangerous things in the water that could have a long-term effect on the residents of Jackson. We have to be careful about that," he says.

Jackson is the largest city in Mississippi, one of the poorest states in the country. The problems of the water network are old there. The financial resources of the municipality are insufficient, with a tax base which has been reduced following the departure of white inhabitants over the past 40 years.

Today more than 80% of residents are black and a quarter live below the poverty line.

Another resident, who does not wish to give her name, summarizes her day with these words: "I need water. I am trying to organize myself, to arrange things at home because I have small -kids and kids. That's why I'm here in this heat."