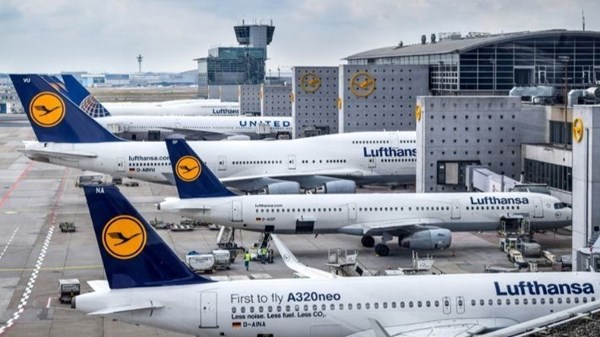 German airline Lufthansa announced the resumption of its flights today, Saturday, according to the scheduled schedule, after the pilots' strike ended at midnight.
A spokesman for the company said, in response to a query, that flights are expected to operate normally, to a large extent, with some delays.
The company had announced on Friday evening that there would be no more flight cancellations on Saturday.
The German pilots' union, Cockpit, limited the strike's scope to 24 hours.
The first flights of the company took off from its hubs at Frankfurt and Munich airports in the early morning.
Because of the strike, the company was forced yesterday to cancel more than 800 flights, affecting 130,000 passengers.
Yesterday, Lufthansa lost its attempt before the Munich Labor Court to obtain a temporary injunction against the pilots' strike.
According to court statements, the airline said the demand for a wage increase based on inflation was an illegal target for the strike, but the court dismissed that argument and allowed the strike to continue.
The dispute between the company and the union revolves around the increase in the salaries of the pilots of "Lufthansa" and "Lufthansa Cargo", who number more than five thousand pilots.
According to the company, the union's demands will increase staff costs in the cockpit by 40%, which it described as unreasonable even without taking into account the financial consequences of the pandemic.
In its last offer before the talks collapsed, Lufthansa proposed a fixed increase of 900 euros ($896) per employee. Lufthansa said this could lead to an increase of 18% for beginners and 5% for pilots in the highest professional grades over an 18-month period.