Richalisson-Langlee IN + Wingbacks all change? 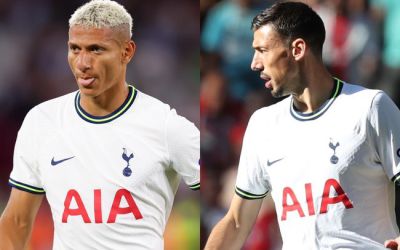 [인터풋볼] Reporter Dong-Hoon Shin = Will Richalisson and Clement Langlet get a starting opportunity?

Tottenham are undefeated in the league, but the content of the game is not good. While conceding only four runs in five games, Harry Kane continued to score and accumulate points, but in terms of detailed performance alone, fans are not satisfied at all. Attack power is particularly problematic. The development is not smooth and the side lines such as Son Heung-min are clogged, making it frustrating.

The right defense is also a problem. Although the number of runs is small, if you analyze only the right defense itself, you can feel the lack of it. Davinson Sanchez, who replaced the injured Christian Romero, and the right wing-back Emerson Royale are pointed out as the reason for the unrest. Romero has returned to training, but coach Antonio Conte is determined not to force him out. Although not as good as the right defense, the left side with Ben Davis and Ivan Perisic was also disappointing.

British 'Football London' reporter Rob Guest predicted an overall change in his predictions for the Tottenham squad against Fulham. The guest reporter predicted that the attacking team would consist of Richalisson, Kane and Dejan Kulusevsky. He insisted that Heung-Min Son be replaced by Hisari Song, who played the Joker throughout the season, to start. Son Heung-min is scoreless in a somewhat disappointing performance that does not meet his expectations.

I thought Ryan Sessegnon and Matt Doherty would be on the left and right wingbacks. Ivan Perisic and Emerson are not named. In the midfield, Yves Bisuma and Rodrigo Bentancour will play, and the goalkeeper Gloves will be Hugo Lloris. It is eye-catching that Davinson Sanchez, Eric Dyer, and Clement Langlet worked together.

Langley was brought in as a Davis backup. In order to sign the left-footed left-handed stopper, Tottenham targeted Yosuko Gbardiol, Pau Torres and Alessandro Bastoni, but failed to bring them all, so they switched to Langley loan. Langley is the left-footed centre-back that Tottenham wanted. However, most of them are skeptical due to their poor performance in Barcelona recently.

The guest reporter said, "It's a good opportunity for Langley to come in as a starter. Sessegnon and Doherty are also ready to be on the starting list. The time has come to send Richalisson, who has spent time on the bench list, as a starter instead of Son Heung-min." talked about the argument of

The categories in this article follow the classification of media outlets.

The category to which the article belongs is classified by the press.
Journalists may classify an article into more than one category.