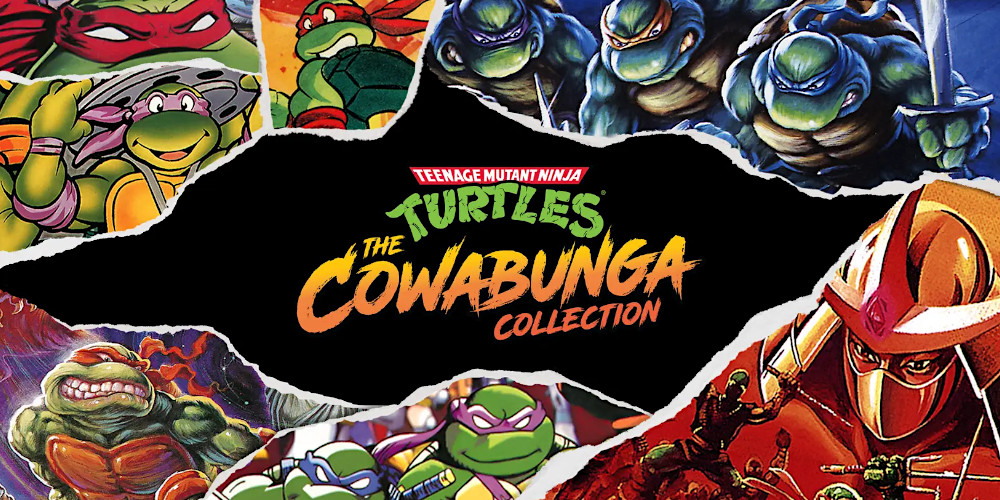 In an age when interest in retro gaming is probably at an all-time high, there is naturally a large market for re-releases of classic video games. While series like Street Fighter and Castlevania have already received various collections, there are also some series that were long thought not to be re-released. The games developed by Konami in the universe of Teenage Mutant Ninja Turtles belonged to this group. Given the various rights holders, it was considered impossible for a long time that games like Turtles in Time would appear for modern consoles. But Konami and the emulation experts at Digital Eclipse have made the impossible possible. Teenage Mutant Ninja Turtles: The Cowabunga Collection, a collection of all the Konami Turtles classics, has been available for the Nintendo Switch for a few days. We took a look at the re-release and tell you why the Cowabunga Collection is a must-buy for retro fans.

In the late 1980s and 1990s, Konami and Capcom were the leading developers and publishers of video games outside of the console manufacturers. This was reflected not only in an interesting and high-quality repertoire of their own brands, but also in a wealth of licensed games that were created by both houses during this time. While license implementations do not have the best reputation today, some of them were among the absolute top titles on their platform, especially in the 16-bit era. The games for the Ninja Turtles were also included on all possible consoles, which spanned several genres and each offered their own implementations of the popular template.

The Cowabunga Collection offers you many extras to immerse yourself in the history of the Turtles games.

The 13 games included in the Cowabunga Collection span five platforms: Arcade, NES, SNES, SEGA Mega Drive and Game Boy. When you start the game, you are first greeted with a fancy intro accompanied by the Ninja Turtles theme song. Then you get to the menu, which itself is designed in the style of a comic and in which you can choose between different sections. All the titles in the collection are grouped in the Games category. In the Online and Local Play groups you will find the titles that support each mode. In the section "The Turtles' Lair" Digital Eclipse has collected various extras, which include high-quality scans of original packaging as well as instructions and concept art. Even recordings from the animation series and the covers of various comic books have made it into the overview. When it comes to video game archiving, the Cowabunga Collection is absolutely exemplary.

But of course, a collection of classics is not primarily about providing exciting extra material, but about the games themselves. Depending on the platform, it is worth taking a closer look at the titles included. It starts with the two arcade classics Teenage Mutant Ninja Turtles and Teenage Mutant Ninja Turtles: Turtles in Time. Both games are very fun beat 'em ups that were previously only available in the arcade. Turtles in Time was later adapted for the Super Nintendo, but the arcade version is graphically and technically a good deal more complex and has an alternative course of the level. Both games are great for fun co-op brawls. Best of all, both titles in the Cowabunga Collection can also be played online with up to four players. So the start is made by two high-quality and modern expanded arcade ports, which are still impressive today. 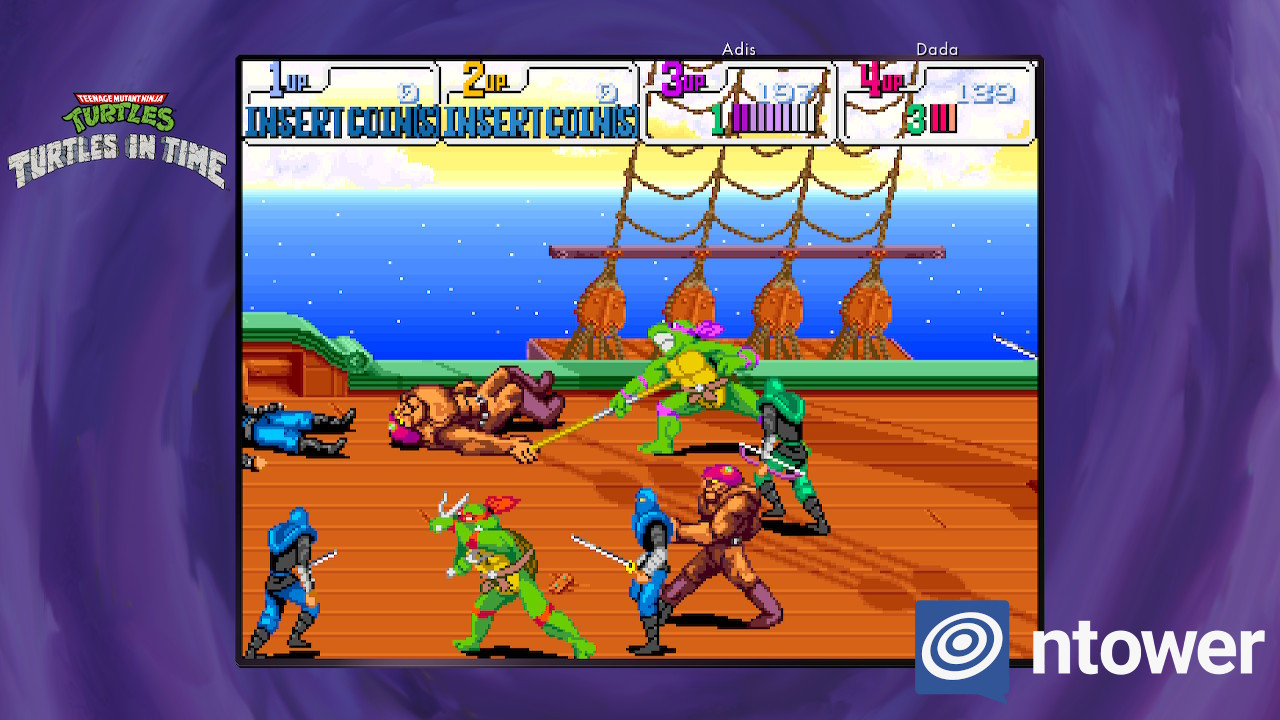 Four games in the collection can also be played online. Also included: The arcade version of Turtles in Time.

The four included Turtles games from the two 16-bit platforms SNES and SEGA Mega Drive represent a technical and playful leap. These include two first-class brawlers: Teenage Mutant Ninja Turtles IV: Turtles in Time and Teenage Mutant Ninja Turtles: The Hyperstone Heist. Not so long ago, we published our own retro test for the grandiose Turtles in Time, which presents the classic in more detail. Hyperstone Heist shares a common DNA with the game and still holds up as a Mega Drive equivalent today. In a direct comparison, Turtles in Time is ahead due to the creative level design, but that doesn't change anything about the very high quality of Hyperstone Heist. As a bonus, the Mega Drive classic has also received support for online multiplayer here as well, making it probably the highlight of the collection for all SEGA fans. 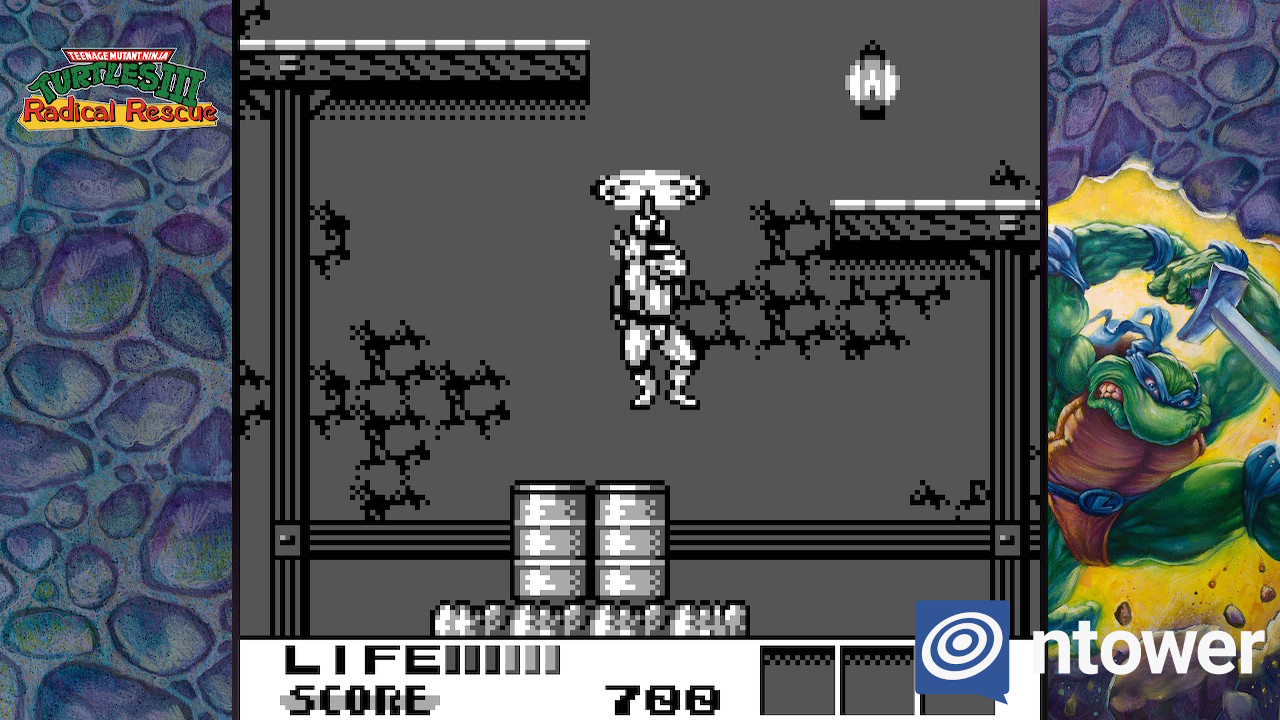 Fans of the three Game Boy games about the Ninja Turtles will also get their money's worth.

In return, fans of the SNES can be happy that their version of Tournament Fighters is playable online and has even received rollback netcode to keep latency low. Tournament Fighters was then released for NES, SNES and Mega Drive. The already mentioned NES version is clearly different here, because it lags behind the other two both visually and in terms of gameplay. In a direct comparison, the versions for SNES and Mega Drive are characterized above all by a different basic tone. While the SNES version shines with a great color palette, the Mega Drive version uses more muted tones and thus appears much cooler. This impression is reinforced, among other things, by the fact that you have to face dark-looking clones of the Ninja Turtles in story mode. In terms of play, however, both brawlers are on a similar, high-quality level. In direct comparison, the AI ​​of the Nintendo version is a bit more flexible, making the title more suitable for those who want to train their combat skills in single player mode.

The collection concludes with the three Game Boy games Fall of The Foot Clan, Back From The Sewers and Radical Rescue. Unlike the games in the collection discussed so far, these are neither beat 'em ups nor fighting games, but action platformers that are playfully kept in the style of the old Castlevania parts. Since the Game Boy was technically very limited and only had two input keys in addition to the control pad, the three games are controlled in a very rudimentary manner. In the first two games, you also occasionally notice some technical limitations of the time, which are due to the original hardware and were not corrected in the emulation. At the same time, you can see the tremendous progress developers have been able to make on the Game Boy. Radical Rescue is the culmination of this development and visually makes a significant leap over the previous parts. Incidentally, the music for all three Game Boy titles is really fantastic: It's really impressive how Konami managed to reproduce the original Turtles sound with the possibilities of the Game Boy.

This is how video game archiving works!

After an overview of the titles contained, a technical analysis is recommended. The Digital Eclipse development team was responsible for the implementation of the Cowabunga Collection. The studio has previously worked on several larger retro projects and has made it its mission to offer high-quality and as accurate an emulation of classics as possible. In this respect, the Cowbunga Collection is a resounding success. All included games are fluently controlled and have been brought to modern platforms in their original version. Even when extensively testing the 13 classics, I didn't notice any irregularities or errors. From the controls to the sound design, every title in the Cowbunga Collection feels very faithful to the original.

However, the true-to-original implementation also ensures that the first two Game Boy parts in particular come along with a few stutters. But since this is the authentic version of these two games, you can hardly blame Digital Eclipse here. After all, the team was concerned with archiving the titles, not developing them further. On top of that, you have a few options to customize the image to your liking. In addition to an image section that is true to the original, there is also a zoomed-in full-screen and a 16:9 mode. The online mode of the collection also looks mature. Both creating a lobby and playing together via the network connection worked without any problems in the test.