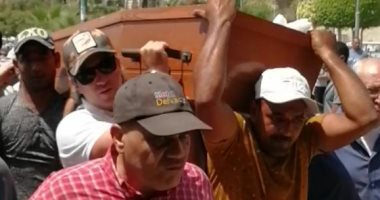 Arrived a while ago, the body of the great director Ali Abdul Khaleq Nafisa Mosque for his funeral and funeral prayers, who passed away yesterday, Friday, at the age of 78, after a struggle with cancer..

The late director Ali Abdel-Khaleq studied at the Higher Institute of Cinema, Department of Directing, and after graduating from the institute in 1966, he worked as an assistant for a while and then turned to directing documentary films, and one of the most famous of these films is his documentary film “Farewell Song”, which won many international awards from documentary film festivals. And the short ones, including the second prize from the Leipzig Film Festival in Germany, and his movie “Suez is my city” won the first prize from the first Ministry of Culture Festival for Documentary Films in 1970.

At the beginning of the nineties, the number of films directed by Abdel-Khaleq decreased, so that he turned to television drama in the early 2000s, and he presented several series, including: (Najma al-Jamahir) 2003, (The Second Gate) 2009.