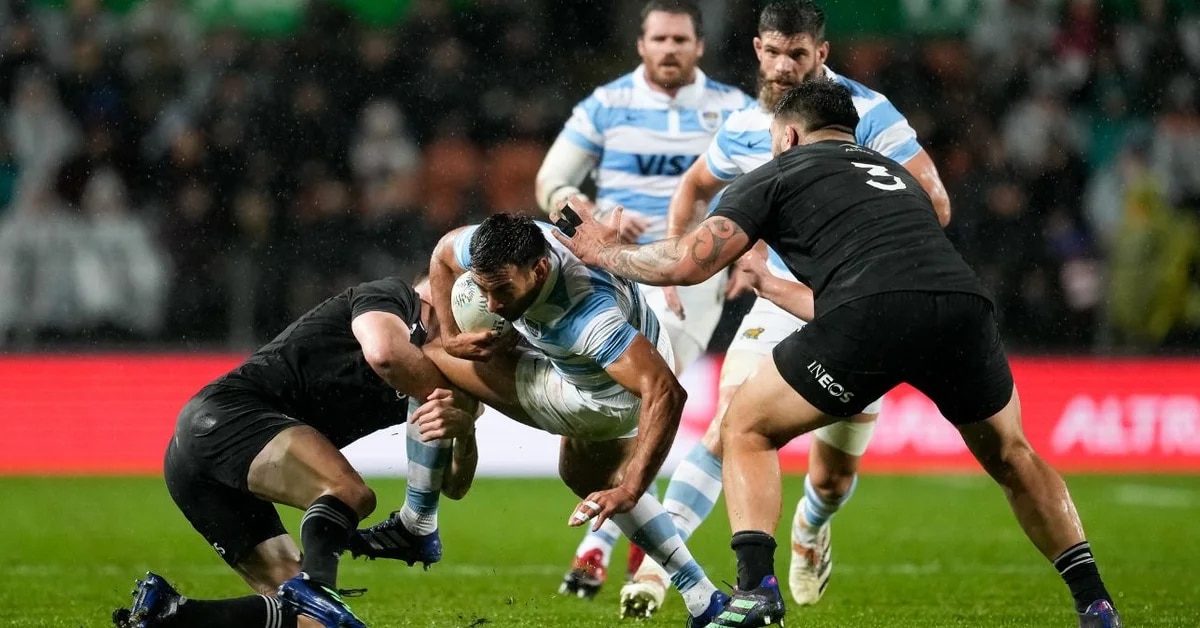 Argentina has a new appointment with the maximum power of rugby (Photo: Getty Images)

The historical dream of Argentina in the Rugby Championship is more alive than ever and this Saturday will be the fourth day of the competition that brings together the best four teams in the southern hemisphere. In the past, the two confrontations against Australia y historic victory over New Zealand in his land for 25 to 18. Before returning to the stadium Joseph Amalfinati to collide with South AfricaThe Pumas will once again challenge the All Blacks in the FMG Stadium Waikato from the city of Hamilton from 4.05 in the morning (Argentine time) and with television from ESPN.

I FOLLOWED THE MATCH MINUTE BY MINUTE

04:04 The match between Los Pumas and the All Blacks started

04:06 Tomás Lavanini lost the ball, giving the All Blacks an advantage and Richie Mo'unga scored a 3-0 penalty.

04:24 The All Blacks make another try through Caleb Clark, converted by Mo'unga. They are positioned 17-0 against Los Pumas.

04:42 Yellow card for Tomás Lavanini for not respecting the 10 meters.

The Pumas enter the second half against the All Blacks. Video: @ScrumRugby

05:31 Try by Jordie Barrett that culminates in a good counterattack for New Zealand. Richie Mo'unga converts and the All Blacks are positioned 34-3.

05:36 After an infraction by Los Pumas, Ardie Savea scores a try for New Zealand and the game goes to 39-3 points.

The Pumas can't find a way around the game and the All Blacks dominate at will. Another infraction by the Argentines leaves the locals meters away from another try with a good lineup. And Ardie Savea, captain since Sam Cane's departure, arrives at ingoal for another try from the New Zealanders. Jordie Barrett takes over the conversion, but fails. It is 39-3 for New Zealand.

The technician of the premises, Ian Fosteraffirmed that they should play without fear against the albicelestes to take revenge for the upset loss and avoid the humiliation of a fourth straight loss at home. The coach surprised at the press conference by confirming the same fifteen players who started in the fall that was played in Christchurch, when Los Pumas made history with their first win over the All Blacks in New Zealand.

On the other side of the sidewalk, the Australian Michael Cheika He assured that he will make four changes in a formation that still does not start as favorites, despite successive victories in the championship that placed Argentina at the top of the Rugby Championship table. the staff leader albiceleste He will leave third row player Juan Martín González on the substitute bench, along with prop Matías Alemanno, winger Lucio Cinti and scrum midfielder Gonzalo Bertranou. the forwards Santiago Grondona y Joel Sclavi will be the starters again, together with the experienced backs Tomás Cubelli y santiago lamb.

The Pumas will seek to repeat what was achieved in Christchurch (Photo: AFP)

”Dude, we are in New Zealand, playing against New Zealand. I know you guys like these kinds of stories, but we're still not favorites. You win once and nobody expects you to do it again. We don't get any benefit thinking like that, ”Michael explained to those present. In addition, he argued that the wins against Ireland in July were important for building the base of the squad and that there is still a long way to go before they can dream of winning the prestigious tournament for the first time.

Ya la number of accumulated units allows the Albicelestes place this 2022 edition as the most important, surpassing what was done in 2018, when they signed two victories (32-19 against South Africa in Mendoza and 23-10 against Australia in Gold Coast) and four defeats that meant the accumulation of eight pointsalthough that did not prevent them from finishing last, far from the 25 points of champion New Zealand.

THE BEST RESULTS OF THE PUMAS IN THE RUGBY CHAMPIONSHIP

With information from AFP.

Maximum tension at the US Open: the crossing at the net between the Ukrainian Marta Kostyuk and the Belarusian Victoria Azarenka
Why he accepted the position and what would happen to his work in the NBA: Pablo Prigioni spoke after being appointed coach of the Argentine basketball team
Raúl Pérez Roldán broke the silence after his son's accusation: "I would like to talk to Guillermo but he blocked me from all phones"
https://www.archyde.com/the-pumas-face-new-zealand-again-with-the-dream-of-continuing-to-fight-in-the-rugby-championship/?feed_id=4191&_unique_id=632d494d7ebe2
Health