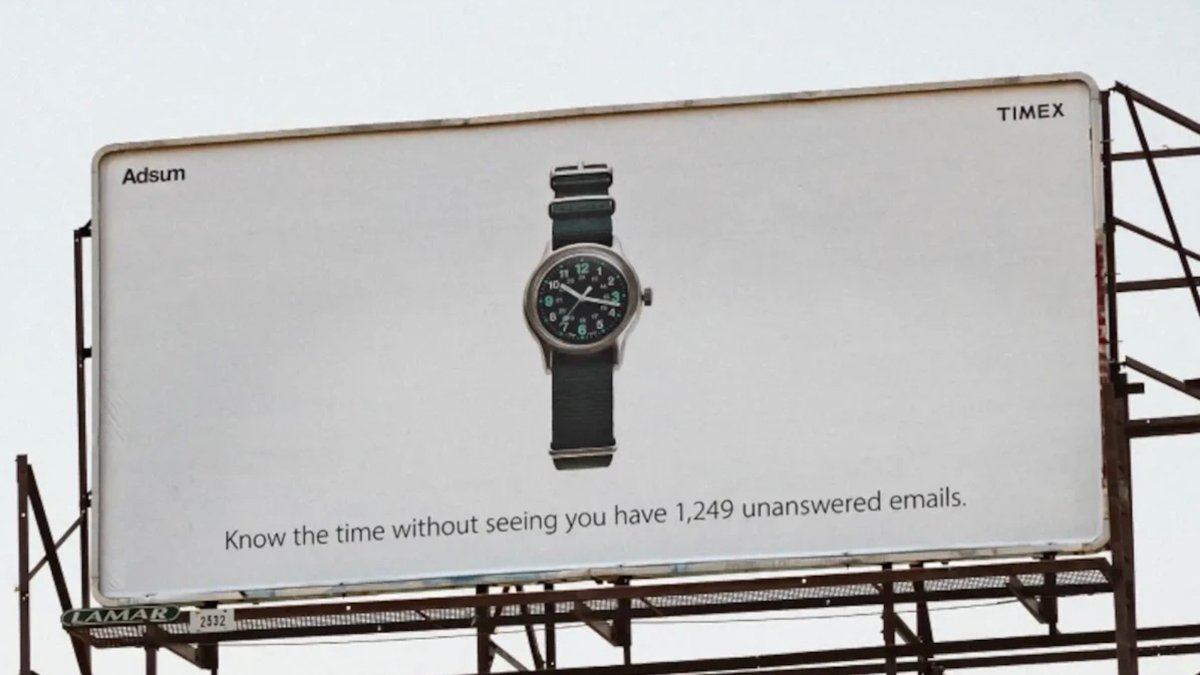 Advertising is a medium that many brands use to promote their products over others. This is the case of the watch brand, Timex, who has chosen to launch a curious new advertising campaign in downtown New York, in which he takes the opportunity to criticize the Apple Watch with a peculiar ad.

Creativity is a characteristic that is of great importance in the advertising industry. It is no secret to anyone that advertising is constantly present in our daily lives, both offline and online, but rarely manages to capture our attention.

As well, the most successful campaigns carried out by brands are those that, with their peculiarity and creativity, managed to attract the attention of the public no matter where they saw it. to the point of remembering it in the future, or in current cases becoming viral on social networks.

Specialists point out that the daily average of advertising hits we receive exceeds three thousand, so creative advertising is important to differentiate yourself, establish a connection with users and make them remember you. A study carried out by eMarketer, this industry generates millions of dollars, since it spends around 516 billion dollars annually in advertising in the media.

The watch brand, Timex, has gone viral these days after launching a curious new advertising campaign in downtown New York, in which he takes the opportunity to criticize the Apple Watch and smart watches.

The Apple Watch, which was officially launched on the market in 2015, has become the favorite watch of many people, to the point of becoming the best-selling watch in the world, exceeding one hundred million units sold. Given this, the sales of firms such as Rolex, Casio or Timex, have fallen, where a Kering study details that in 2020, the luxury watch sector had a turnover of approximately 30 billion euros.

In an increasingly digitized world, the vast majority of brands have unsuccessfully opted to create their own smartwatch lines, so CCS Insight details that smartwatch shipments worldwide are expected to continue to grow. to medium and long-term over the next few years, going from 37 million units sold in 2016 to more than 258 million in 2025.

The Timex campaign, founded in 1854, takes the opportunity to promote the latest analog watch model, but focused on criticizing smart watches and, especially, the Apple Watch.

The advertising found in the Big Apple shows the models of the latest analog watches that it has launched together with the firm Adsum, but what is peculiar is the text that can be read at the bottom: “know what time it is without seeing that you have 1,249 unanswered emails.”

With this phrase, it is quite clear that the firm does not support the movement of the smartwatches.

It is worth mentioning that Timex since its founding, mainly focus on mid-range analog watches, with classic design and smooth operation, but generally without the health and intelligence functions of watches like Apple Watch.

Likewise, the brand attracted attention not only for its advertisement, because on its own website it can be seen how it has its own line of smartwatches, which are relatively cheap smartwatches and, as expected, not as complete as the Apple Watch.

In that sense, once again a brand has caught the attention of consumers with a creative and peculiar advertising campaign.