Watch the collision, a Turkish "van" driver exits her window and flies with the air 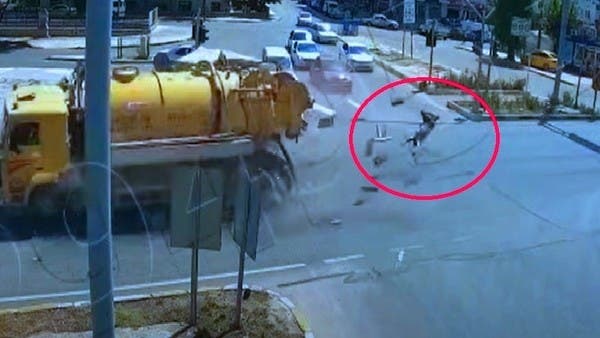 Had it not been for a video whose scenes were filmed by a public surveillance camera on a street in the Turkish capital, Ankara, no one would have believed that a municipal dump tanker collided with a van as it set off from the traffic light. Then he crouched and rolled on the asphalt to where his head hit a concrete barrier.

Nevertheless, he appeared as he was getting up shocked by what had happened, and then proceeded to dust his clothes as if nothing had happened, according to what we see in a video presented by "Al Arabiya.net" below, in which we find that those who were nearby hurried to the tanker, which overturned with its driver in a place from The street was not captured by the camera, but the Turkish İhlas News Agency reported that his driver, who was taken by an ambulance to a nearby hospital, treated him there.

However, the tanker overturned injured 6 people, including 2 who were in the "van" whose driver flew, in addition to 4 who were crossing the street, so ambulances came and took everyone to the hospital, just as they transferred the driver of the "van" as well.