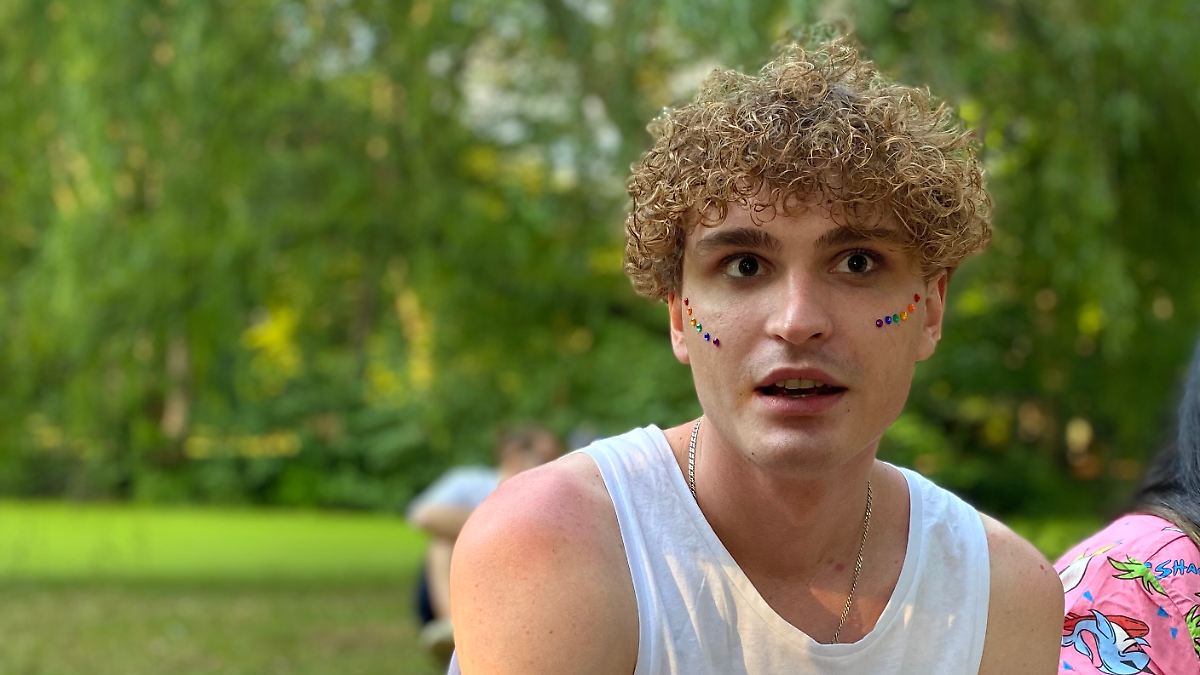 Young, queer and in Berlin Oleksandr does not believe in peace soon

23-year-old Oleksandr lives in Berlin and left Ukraine before the war began. He collects donations, helps Ukrainian refugees and worries about his ex-boyfriend - at the same time he feels guilty.

Oleksandr R. comes from Ukraine. When his home country is invaded by Russia in February, he doesn't have to flee: he has been living in Berlin since November.

The 23-year-old is originally from Avdiivka, a small town that is part of the Donetsk district but outside of the "Donetsk People's Republic" formed by Russian auxiliaries in 2014. At the time when Ukraine was attacked, Oleksandr was 15 and in a boarding school in the city of Donetsk. He packs his belongings and flees to his parents.

At the age of 17, after graduating from high school, he moved to Kyiv and studied data science. For six years he experienced Kyiv in all its glory. As a young gay man, he discovers the nightlife of the Ukrainian capital and becomes part of the growing LGBTQ+ community. At the end of last year he finished his master's degree and moved to Berlin, where he worked as a data analyst for a game developer.

None of his family members are left in his hometown of Avdiivka. The city originally had 30,000 inhabitants. Since the clashes intensified again in February, most people have left the eastern Ukrainian city. Today only a few thousand inhabitants remain. Oleksandr's family and friends have also left.

When the attacks on Ukraine start, Oleksandr has to persuade his mother, who lives separated from his father, to come to Germany with him. After two weeks she packs her things. It takes her three days to get to the Slovakian border, where Oleksandr picks her up. Now they live together in a one-room apartment in Berlin-Schoeneberg. His father is not allowed to leave the country. He is under 60 and therefore belongs to the conscripts. However, Oleksandr isn't too concerned about him: "He's older, so the chances of the army conscripting him are very low."

He's more worried about his ex-boyfriend in Ukraine. "At his age, the chances of having to go into the army are greatest." The two are in contact every day. "We are best friends," says Oleksandr. Almost all of his girlfriends have fled. His friends have to stay in the country.

Many gay and lesbian soldiers are currently fighting at the front. They defend not only their fatherland, but also their rights and freedoms. It would be particularly dangerous for them if Ukraine were taken by Russian troops. Russia has strict laws on "gay propaganda". This threat to the rights of queer people is of particular concern to Oleksandr.

"Wow my nation is united"

Oleksandr believes that over 90 percent of the Ukrainians who fled will return to their homeland. "My relatives and friends can't wait to come back to Ukraine. It's hard to start a new life in a foreign country when you already have everything at home - your favorite bar, your favorite club, your loved one."

However, his mother wants to stay in Berlin. "It's a bit different with her because I live here." She is now attending a German course. The two will soon be moving to a larger apartment.

Oleksandr has been to Ukraine once more since he left - in February, just before the war. He was surprised at how much Ukraine had changed in just three months. "Usually, Kyiv was half Russian-speaking and half Ukrainian," he recalls. In February, almost everyone in Kyiv spoke Ukrainian. He didn't just like that: "It felt strange that everyone was so nice. I thought to myself at the time: Wow, my nation is so united."

"All thoughts revolve around Ukraine"

Sometimes guilt plagues Oleksandr. If he is asked about his origins on the street, he is always proud to be Ukrainian. But when he's in bars or clubs, he often feels guilty. "I mean we're asking people for donations and at the same time I'm in the bar with a drink in hand." A lot of people would get that wrong. Of course, people would not know how much money Oleksandr himself donated to his homeland or how he otherwise helps. He tries to support everyone at home as best he can. At times he housed a family. There was space for five people in his small apartment. The family has now moved into their own apartment.

But he also needs time off from the war and the news. "In the first few months it was impossible to have a good time," says Oleksandr. "You're at home all the time and all your thoughts are on Ukraine." It's hard for the young Ukrainian to think of all his friends who aren't allowed to leave the country. They now sometimes have to fight at the front and fear for their survival every day. He, on the other hand, was lucky and is safe in Germany. To this day, he checks the news on Telegram and in the Ukrainian media almost every minute. As soon as there is a new attack, acquaintances are contacted in a panic and asked about their well-being. And every day, from morning to night. But you can't always do that without breaking it. "It's impossible to go on with your life without getting a break from everything."

Oleksandr doesn't believe the war will end anytime soon. As early as 2014, many assumed that the war would end quickly. "Me and my family don't have much hope that the war will end soon," he says. The only way the war can end is for Putin to die or for the Ukrainian army to succeed. In any case, the Ukrainians would not stop fighting. "Until we win, there will be no agreement," he says.