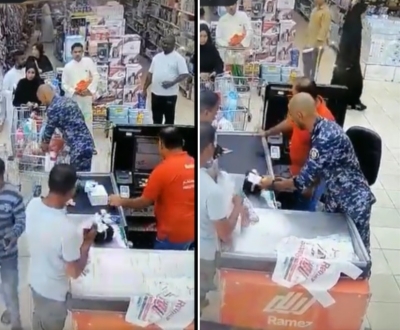 Al-Marsad newspaper: Kuwaiti writer in Al-Qabas newspaper, Tayseer Al-Rasheedan, published a video clip showing the exploitation of an officer of his military rank and the use of force against shoppers in a mall.

The video showed the security man, who had deliberately violated the role and pushed a woman and a man and forced them to retreat to take their place to pay the bill for the goods he had bought.

The writer commented on the clip, saying, "A one-star officer assaults shoppers in the Ramez market and terrorizes them in the state of justice and safety."

Later, the Kuwaiti Ministry of Interior issued a statement saying that the criminal security sector had arrested a person who appeared in a circulating video clip wearing military uniforms (special forces) using force with people in a shopping mall.

And she continued, it became clear that he is an employee of the ministry, and he is being referred to the competent authorities to take the necessary legal measures against him.

The security man was arrested after he was monitored in the video, and she stated in her statement that: “It turned out that the person was affiliated with the Ministry of Interior and was referred to the competent authorities to take the necessary legal measures against him.”

Honorable Minister of Interior and Defense,

In the state of justice and safety pic.twitter.com/Iaqcx5TqHL