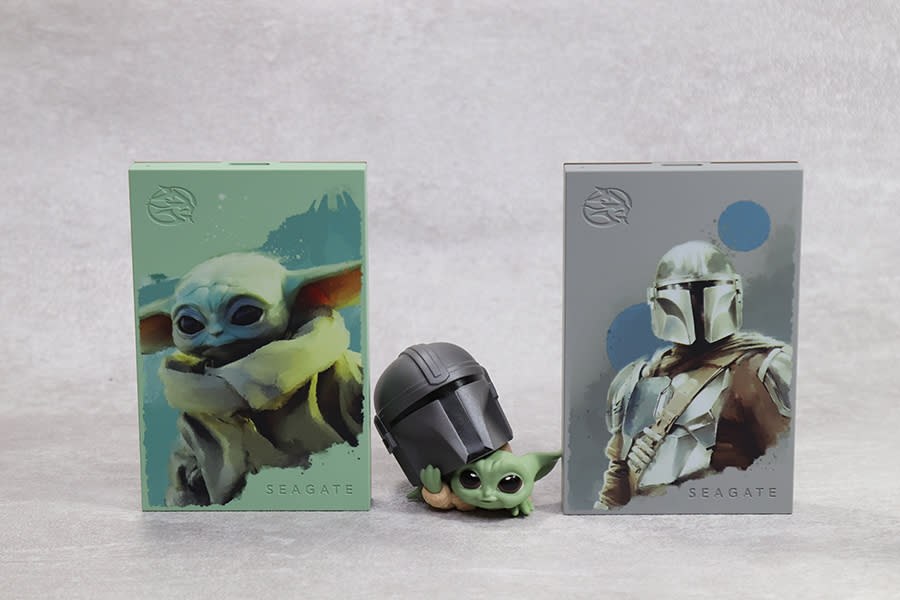 Not sure if you are a fan of Star Wars (Star Wars movies or series)? Are you deeply fond of and fascinated by the characters in "Boba Fett" and "The Mandalorian" recently released by Star Wars? These two series have very high praise, even surpassing the "Obi-Wan" expected by old Star Wars fans; and Seagate previously announced on 5/4 Star Wars Day that three models featuring Boba Fett (Boba Fett) were released. Fett, Grogu and The Mandalorian designed collector's edition hard disk (HDD), can be said to make many Star Wars fans very excited! These three products are Seagate Special Authorized Storage Device SeriesThe latest member of the company, the product uses 2.5″ HDD as the data storage element, providing 2TB of appropriate large-capacity data storage space, which can correspond to PC, Mac, PlayStation and Xbox, allowing technology enthusiasts to store all kinds of media, files and games. Worry about operating system problems!

These three special-edition FireCuda external hard drives join the Beskar Ingot Drive in Star Wars, with three unique aesthetic designs, each showing the unique personalities of different legendary characters: legendary bounty hunter Boba Fett is handsome, Gugu Happy fun, and The Mandalorian honor is supreme. Customizable RGB LED lighting effects are available on the hard drive, and each design is preset with the representative lighting colors of different characters: Boba Fett is a dazzling red, Gugu is a brilliant blue, The Mandalorian It is a bold and fearless dark blue. All three hard drives feature customizable lighting effects, allowing gamers and Star Wars fans to pay homage to a galaxy far, far away, even at home!

All three special edition FireCuda external hard drives feature USB 3.2 Gen 1 for fast transfer speeds and can be powered directly from the USB bus, plus the product's lightweight design makes it ideal for Star Wars players who want to carry an eye-catching hard drive with them. "Lovers. Special edition hard drives come with Seagate's three-year limited warranty and three-year Rescue Data Recovery Services, so users can embark on any adventure without worries!

out of the box

I'll start with the Grogu style for reference.

In addition to the external hard drive body, there is also a USB 3.2 Gen 1 transmission cable (with a durable braided cable body design) in the box; the product can be used with PC, MAC, PlayStation and Xbox.

In addition to the user manual, there are also stickers for Star Wars! –> Confirm ancient version

The size of the product is not large, and the built-in 2.5-inch 2TB high-capacity HDD makes the body size small and easy to carry~

Seeing such a cute Gugu, are you tempted to buy it?

Three versions lined up for everyone to see!

There are corresponding Star Wars character names directly below

Each back has a special totem design with different elements!

I wonder if everyone likes Gugu and The Mandalorian as much as I do (sorry! Boba Fett)? Watching The Mandalorian go from acquaintance with Gugu to separation, it's really sad~

Boba Fett is a dazzling red

We choose the Mac platform as a test for data access speed. The hardware device is the latest version of the M1 Mac mini. The product can read data on the Mac / PC platform without formatting!

In Mac OS, it can be seen that the capacity of this external hard disk is 2TB, it is in ExFAT storage format, and there is a corresponding device image displayed!

On the whole, using the Seagate external hard drive can bring a very pleasant mood, especially for Star Wars fans, it is equivalent to owning the product of the Empire, built in three unique shapes of Star Wars characters, to store your precious games or other valuables. material! The product can perfectly correspond to Windows PC and Mac. If your tablet supports USB OTG, it can also be used to access data. For the game console part, it can also be used as a game data storage disc with confidence, but it is recommended to store games that are played less frequently. After all, this is an HDD that has a physical data access speed limit.

These three new collector's edition hard drives have been sold in Taiwan, all priced at NT$2,888 (2TB), and M.2 Beskar Ingot Drive Special Edition SSD is also available for purchase, and this m.2 SSD we We will also introduce you to the unpacking!