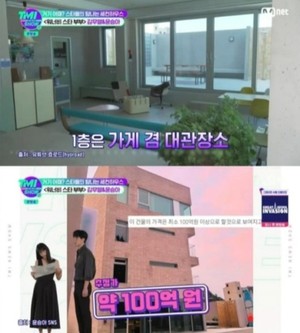 The price of the second house of actors Kim Moo-yeol and Yoon Seung-ah is attracting attention.

Mnet's 'TMI NEWS SHOW', aired on the 31st of last month, was decorated with the theme of the BEST 10 stars who own the most expensive second house.

The two bought land in Yangyang-gun, Gangwon-do around 2020 and built a 4-story, 133.3-pyeong country house.

The villa, a four-story house made of monotone bricks, has a basketball court and an outdoor shower in the yard.

The first floor is a space for rental, used as a studio, and for guests on days when there is no rental.

The 2nd and 3rd floors are guest houses and living spaces for couples. The fourth floor is used as an office.

The couple reportedly settled here after enjoying surfing in Yangyang.

The price, including land and building market prices, is estimated to be at least 10 billion won.

After Kim Mu-yeol and Yoon Seung-ah, the star with the most expensive second house was IU.