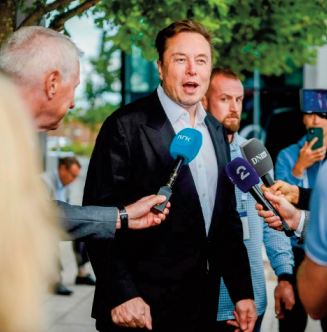 The richest man in the world, Elon Musk, himself the father of ten children, on Monday called on his contemporaries to have "more babies" but also to exploit more oil and natural gas.
"Believe me: the baby crisis is a big deal," the 51-year-old entrepreneur told reporters in Stavanger, southwestern Norway, where he was due to attend an energy conference.

Asked about the greatest challenges facing the world, the founder of the American electric car manufacturer Tesla certainly cited the transition to renewable energies but he immediately continued on the birth rate, "one of (his) favorite concerns , perhaps less well known".

In Western societies as in extremely populated countries such as China, the birth rate is falling, mainly due to the aging of the population.
"It's important that people have enough babies to keep civilization going," he said.

"They say that civilization could go with a boom or a moan. If we don't have enough children, we will die in a moan (wearing) adult diapers. It will be depressing," he said. he adds.

"Yes, make more babies," he concluded. "At least make enough babies to maintain the population. We don't want the population to drop so low that we end up going extinct."

Divorced three times, Mr. Musk is the father of ten children, one of whom died at 10 weeks. One of them, a transgender girl, recently filed a formal request to change her surname along with her gender in order to sever all ties with her father.

And the American press recently revealed that he had twins in November with a leader of Neuralink, a few weeks before the birth of Exa Dark Sideræl Musk, whom he had with the singer Grimes. She is the little sister of "X Æ A-12", a boy.
Arrived in Stavanger in a private jet, Elon Musk also felt that the planet still needed fossil fuel sources.

"I think realistically we have to use oil and gas in the short term, because otherwise civilization would collapse," he said, "especially these days with the sanctions on Russia."
“It would be justified at this time to explore more” hydrocarbons in Norway, he also estimated.

The largest producer of oil and natural gas in Western Europe, the Scandinavian country is now very much in demand by other European countries in the grip of an energy crisis and eager to break their dependence on Russian gas.