How friendly are you... North Korea 'gives food' to this country, not China [신짜오 베트남] 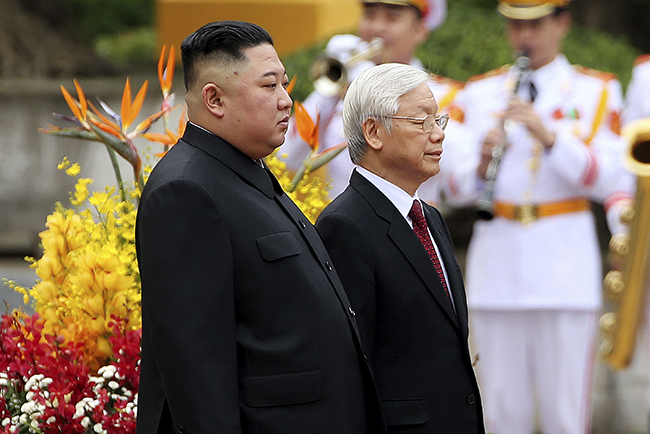 [신짜오 베트남-209] Reports have emerged that North Korea has requested food aid from Vietnam. Amid these reports, North Korean leader Kim Jong-un is drawing attention by sending a congratulatory message to Vietnamese President Nguyen Xuan Phuc to celebrate the 77th anniversary of Vietnam's independence. Although North Korea has annually celebrated Vietnam's independence every year, it is a congratulatory message sent amid sensitive reports, which draws more attention.

Earlier on the 1st, Voice of America (VOA) reported that a large number of batteries presumed to be food were captured at Nampo Port in North Korea. An analysis of photos taken on the 21st of last month by 'Planet Labs', a private satellite photography company, showed that the coal port of Nampo Port was loaded with white objects. The goods that North Korea transports in sacks are mainly grains and fertilizers, but considering that fertilizer imports are usually made between January and May, the bags are likely to be food, VOA estimated.

Earlier, the Indian Chamber of International Business (ICIB) posted on its website, "North Korean commerce officials and other officials have visited the ICIB office in New Delhi, India, to discuss humanitarian grain assistance to North Koreans." I have disclosed it. After the report went out, ICIB said that it deleted all related photos from its website.

In an interview with VOA, former World Bank adviser Bradley Babson said, "I've heard that even farmers are starving in North Korea. Considering the political and international situation, it is highly likely that North Korea will choose a friendly country and ask for its own support in the future. “I know that Vietnam also requested food aid months ago,” he said.

Amid these reports, Chairman Kim borrowed a congratulatory message and said, "On the 77th anniversary of the founding of the Socialist Republic of Vietnam, I send ardent congratulations and warm greetings to the Comrades General Secretary and Comrade President, the Communist Party of Vietnam, the government and people. The people have made great strides in the struggle to safeguard the sovereignty of the country and people and build socialism under the leadership of the Communist Party of Vietnam."

“I am truly delighted that the Communist Party of Vietnam, the government and the people are making achievements in the struggle to achieve the goal of building a modern and developed socialist state set forth by the 13th Party Congress. "I am confident that the friendly and cooperative relationship between the two parties and the two countries will continue to develop as agreed upon at the Hanoi reunion in March 2019."

So, what will Vietnam think of North Korea? We look for the beginning of that thought in the 'March 2019 Hanoi Reunion' mentioned by Chairman Kim. As is widely known, this was the time when the 'Debate of the Century' between former US President Donald Trump and Chairman Kim was held in Hanoi.

Chairman Kim has been traveling by train from Pyongyang to Hanoi for over 60 hours. The day before he crossed the border between China and Vietnam, I was running from Hanoi to Dong Dang, a simple station in northern Vietnam. And then I was waiting for a historic moment with about 100 foreign reporters trying to capture the moment when Chairman Kim crossed the border.

What I saw in the process was that Vietnam was very serious about North Korea. Because Vietnam made a lot of preparations to commemorate Chairman Kim's visit. Chairman Kim's visit to Vietnam for the first time in 55 years as a North Korean supreme leader was called an 'official friendly visit', but the level of protocol at the time was the same as a state visit.

Along the two-hour national road that Chairman Kim runs from Dong Dang Station to Hanoi, the new Golden Star flag and the Communist Party flag were lined up. New asphalt was laid on the road around Dongdang Station, and there were paint brush marks that looked as if they had just been painted on the old exterior walls.

Chairman Kim arrived early in the morning according to local time, and hundreds of Vietnamese residents who appear to have been mobilized gathered around the station to welcome Chairman Kim. A number of high-ranking officials, including Bo Van Thuong, a member of the Politburo in charge of propaganda, who was 13th in the ranks of the Communist Party of Vietnam at the time, Mai Tien Zhong, Minister of the Prime Minister's Office, and Vice Foreign Minister Le Ho Ay Tung, participated in the procession to meet Dong Dang Station. Po Van Thuong, a member of the Politburo, was an 'ace', who was evaluated as a promising stock with a high possibility of becoming the next Vietnamese leader (actually, he was promoted to the standing secretary of the Communist Party and recently met Roh Tae-moon, president of Samsung Electronics and head of the MX business) at the Suwon plant. I did). And then Vietnamese President Nguyen Phu Trong held a dinner welcoming Chairman Kim.

Korea has a substantial influence in Vietnam, to the extent that Korea is one of Vietnam's largest trading partners. However, the skinship between Vietnam and North Korea accumulated over a long history has not changed much. The fact that North Korea, which is extremely reluctant to reveal externally that its food situation is difficult, makes a 'request for help' to Vietnam also means that the two countries have a close relationship.

However, if we move the subject to 'the realm of life' rather than 'the realm of politics', it would not be too much of a stretch to say that North Korea is a 'country of indifference' from Vietnam's point of view. In Hanoi or Ho Chi Minh City, when you grab a street person and say, "I'm Korean," no one asks, 'Are you from South Korea or North Korea?' Of course, I think of South Korea and Korea, not North Korea.

The countless Korean signs you see on the streets of Vietnam are all South Korea, but none of North Korea. Samsung, LG, Shinhan, Lotte, Hyosung, and Daewoo E&C, as well as the entities that entered Vietnam, are all Korean companies. When I see this, I think that the North Korea seen in Vietnam is like a 'faded picture'. Isn't it like a past history that has memories but no present? Leaning on 'Following History' The North Korean leadership's need to ask for food aid will not be comfortable either. The situation in North Korea, which is already bad in the aftermath of inflation that has already hit the world, will not get any better.

Like Vietnam, which started with 'socialism' and moved on to 'de facto capitalism', North Korea will be able to overcome the difficult situation only if it can break the blockade and boldly go global. It's not easy to do that.