Mikati intends to meet Aoun to conduct business.. All eyes are on Ain al-Tineh and what Berri will decide 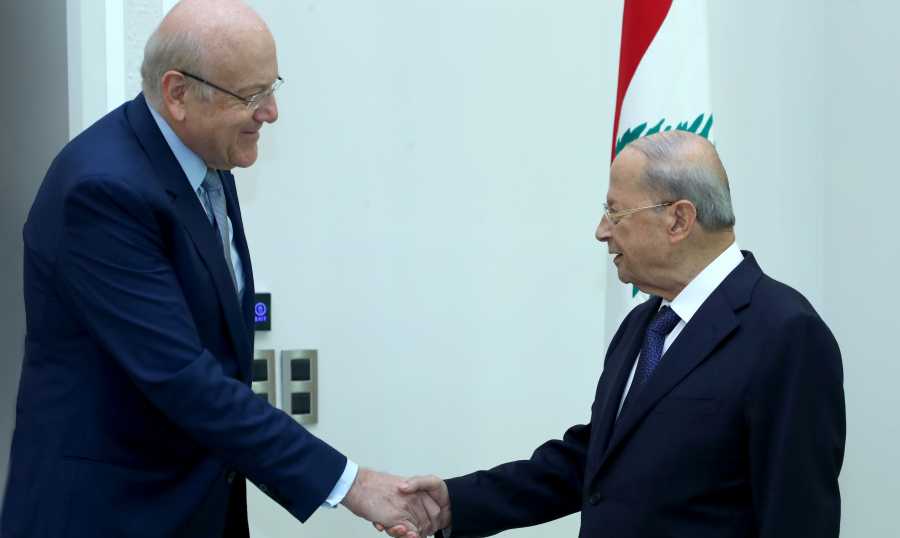 A prominent political source who accompanied the atmosphere that prevailed in the fifth round of government formation consultations between Presidents Michel Aoun and Najib Mikati revealed that Mikati will not remain silent indefinitely about the President of the Republic's persistence in closing the door to floating the current government, by refusing to discuss any formula that would push To get it out of the crisis, he told Asharq Al-Awsat that Mikati is currently considering limiting his meetings with Aoun to matters directly related to running state affairs and paying attention to the living concerns of the Lebanese.

The political source pointed out that the last meeting between Aoun and Mikati only touched on the issue of forming a government, and that Aoun devoted the remaining time of the meeting to criticizing Parliament Speaker Nabih Berri, blaming him for the disasters that hit his reign, and said that the president-designate was not comfortable with Aoun's insistence. To close the door to discussing the government file, and this is what prompts him to suspend authorship consultations and not to go to the Republican Palace as a designate, but rather as the head of the caretaker government to consult with him in managing emergency matters for the country, and in those related to the problems of the Lebanese.

In other words, Mikati does not match Aoun by using the authoring consultations as a bulwark to attack this or that party, because priority, as the same source says, should be given to forming a government by floating the caretaker government.

The political source adds that Mikati, although he is already looking forward to meeting Aoun as the head of the caretaker government, does not want to close the doors on resuming meetings to discuss the government file, in the event that Aoun revised his positions to resume communication, especially since he was the one who closed it by refusing in the last meeting. Limit the discussion to the government file.

He confirms that Mikati is ready to resume authorship consultations in the event that Aoun initiates positive signals that can be built upon to proceed with communication, and says that the ball is now in Aoun's court.

When the political source was asked about the validity of what was reported that Mikati might not mind dismissing his demand to replace the Ministers of Economy, Amin Salam and the Displaced, Essam Sharaf El-Din, provided that it comes in the context of releasing the current government’s flotation, he said that the decision rests first and foremost with the designated president, who expresses all Willingness to sacrifice in order to overcome the differences over its formation.

He adds that Mikati will not cause any problem if it is decided to keep the two ministers, Salam and Sharaf al-Din, but only on the condition that Aoun deals with this step with openness and flexibility. He believes that he is ignorant of the reasons behind Aoun's resorting in his last meeting with Mikati to turn the table back to the zero point, and asks why Aoun insisted on using the last meeting as a platform to attack Berri? Does he believe that he is now in the position to engage in settling accounts with the Speaker of Parliament, while preparing to leave the Republican Palace as soon as his presidential term ends?

He asserts that the bet by the political team affiliated with Aoun on the latter's ability to plunge the country into a political crisis that would allow his political heir, head of the Free Patriotic Movement, MP Gibran Bassil, to invest in it politically, is incorrect, because he does not have the political ability that enables Bassil to re-shuffle the cards. .

The same source believes that Mikati's decision to suspend his continuation of the authoring consultations with Aoun does not mean that the possibility of floating the caretaker government has been permanently withdrawn from circulation, and that there is an opportunity to restore its consideration, and before Aoun leaves "Baabda", and with international intervention to block the path to drag the country into a clash. Constitutional in the event that it is difficult for the representatives to elect a new president, even though the constitution stipulates that the powers of the president are delegated by proxy to the Council of Ministers as a whole without noting whether the government is fully qualified or undertakes the conduct of business.

With the file of forming the government finally closed, in the last meeting between President Michel Aoun and Prime Minister-designate Najib Mikati, and the failure of the President of the Republic’s attempt to go to a political government, the priority has become for the presidential election, and attention is directed to Ain al-Tineh and what Parliament Speaker Nabih Berri will decide regarding the election session. President of the Republic".

In this context, responsible sources assured Al-Gomhoria that the month of September will not bring with it any development or measure related to the presidential election. Elections only after the General Assembly of the House of Representatives approves the reform items demanded by the International Monetary Fund. This is on the one hand, but on the other hand, the current September, if there is a serious approach to completing the presidential elections, inevitably constitutes an opportunity to hold intensive consultations that will pave the way for the list of names listed in the club of candidates for the first presidency, leading to consensus on a personality with the required specifications. This is with the knowledge that the possibility of consensus among the political components is impossible in light of the existing division.”