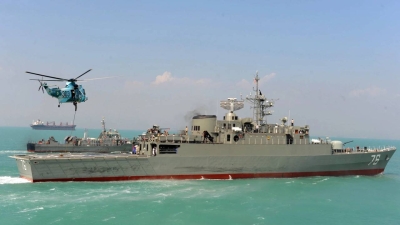 Al-Marsad newspaper: On Friday, the US Navy published a statement, commenting on Iran’s seizure of two drones operated by the US Fifth Fleet in the Red Sea.

The Fifth Fleet said in a statement on Twitter that an Iranian navy ship had captured two Saildrone Explorer-class drones operating in international waters before returning them to the US Navy the next day.

The statement stated that the two unmanned boats were taking unclassified pictures of the surrounding environment at least 4 nautical miles from the nearest sea lane, without posing any danger to maritime traffic, and they were operating for more than 200 consecutive days without incident.

The US Navy said, "At about 2 pm (local time) on September 1, the US Fifth Fleet discovered the Iranian ship approaching the two drone boats and taking them out of the water. Two nearby destroyers and a helicopter responded to the situation immediately, as contact was made with Iranian ship to retrieve the two boats.

The statement confirmed: "The Iranian ship released the two unmanned boats at 8 am on September 2nd."