The James Webb Telescope captures an extraordinary phenomenon that no one has ever seen - Scientific Exploration - cnBeta.COM

NASA's James Webb Space Telescope is the most powerful space telescope ever created by mankind. It has shown us some surprising things. Not only has the telescope demonstrated stunning capabilities with its first full-color image, but it's also continually learning about our universe through new observations.The latest image from James Webb is truly spectacular, showing a so-called wind binary system.

The most recent image was created by Judy Schmidt and shared on Twitter. It was created using data from James Webb's MIRI instrument, which sees the universe through infrared light. The star system lies about 5,600 light-years away and is known as WR140. It is an extremely rare pair of binary stars that can be found in the constellation Cygnus. But what makes James Webb's wind double star image so striking? 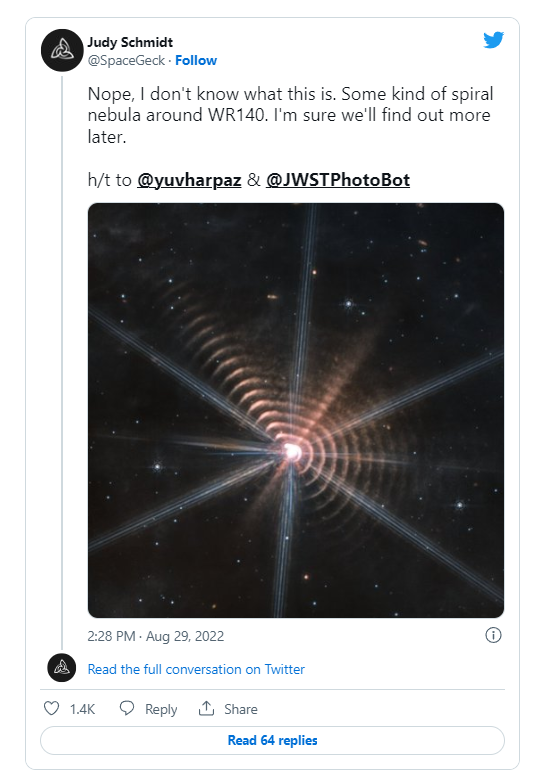 The iconic circular vortex around the star that appears in the image is a start. Of course, there will always be the usual diffraction spikes, caused by James Webb's observations. But the image also shows how light is left behind through gas and other matter when the rare pair of binary stars orbit each other.

Both stars, a Wolf-Rayet star and a massive O-type star, are rare. And when found in the universe, they rarely coexist closely together. However, as is the case here, the two stars orbit each other in their own orbits. As they get close to each other and into their low-Earth orbits, their powerful winds collide, creating debris and dust that are then illuminated by the light they emit. It was a shocking and breathtaking situation that made room for an amazing photo opportunity. James Webb's capture of the wind double star in action is equally astounding. When each star's dust cloud collided, it was heated by the ultraviolet light of both stars. This causes dust and matter to glow and heat up, as we can see in James Webb's images.

This image was created by Judy Schmidt. She has also worked with other images in the past using James Webb's data. It is also worth noting that, according to the Science Alert, the image above contains about 160 years of dust crust. That's because the star's orbit only approaches every 7.94 years. So each pass creates new rings, pushing the old ones outward.

The last time the two stars "passed by" should have happened in 2016. Scientists are also studying this star system, so it's possible to learn more about WR140 and what makes the wind binary so fascinating at some point in the future. James Webb continues to unravel new secrets of our universe, so maybe it will also give us a better understanding of stars like this one.