Where is the region with the lowest charters?… Daegu, Sejong, and Incheon are at risk [나기자의 데이터로 세상읽기] 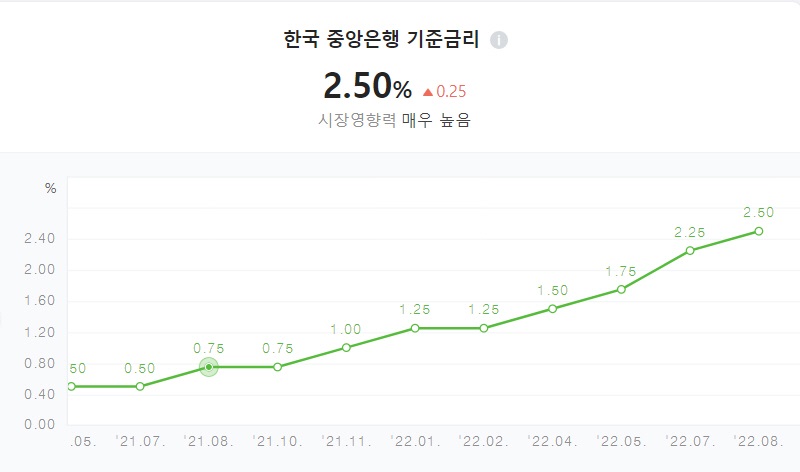 [나기자의 데이터로 세상읽기-14] In August, there was virtually no whole generation. Nationwide, the jeonse price fell by 0.4% this year. As Jeonse, which acts as a fertilizer for gap investment, has fallen, apartment sales prices are also gradually collapsing.

Which region has the largest drop in apartment jeonse this year? How much more will Jeonse price drop in the future?

The interest rate on the Jeonse loan was about 3.7% on average in May alone (based on 15 banks and Korea Housing Finance Corporation). However, in July, it increased by 0.5 percentage points to an average of about 4.2%.

This is due to the increase in the base interest rate. The base rate in May was 1.75%, but rose to 2.25% in July. It is currently at 2.5% and is likely to rise to around 3% in the future. The era of the average interest rate of the Jeonse loan loan of 5% is fast approaching.

Last year alone, I was able to get a Jeonse loan at an interest rate of 2% per annum. If it rises to the 5% level, the borrower's interest rate will double.

This is the national average. Jeonse is more expensive in metropolitan areas than in non-metropolitan areas. Although the exact statistics are not known, it is highly likely that the increase in monthly rent will be greater than 400,000 won if the loan is the same as last year. If you do not receive the benefits of the system, such as interest support on the Jeonse Loan for newlyweds.

② In which region did the Jeonse drop the most this year? Daegu, Sejong, Incheon

We looked at the statistics from January to July of this year. In which area did the jeonse price for apartments drop the most this year?

The first place was in Daegu's Jung-gu area, where the jeonse price index fell by a whopping -11.5%. Usually, the actual price drop is larger than the official index. The exclusive area of ​​85 square meters for Star Class Namsan, Far East, Jung-gu, Daegu, last year went up to 520 million won in January last year, but has recently been traded at 300 million won. That's a reduction of over 30%.

Dalseo-gu, Daegu, ranked second, and Sejong, which is evaluated as the region with the most recent drop in sales prices and jeonse, took third place. Yeonsu-gu, Incheon (4th), and Seo-gu, Incheon (6th) are regions where jeonse prices have fallen. A typical example is that the apartment in Songdo, which has been called the 'Gangnam of Incheon' and whose sales price has more than doubled in the past two years, has recently seen a simultaneous decline in sales and jeonse prices. In fact, the 85 m² dedicated to Songdo The Sharp Park Avenue, which is known as the Jangjang complex in Songdo, right in front of Incheon National University Station (Incheon Line 1), where the Metropolitan Express Railway (GTX)-B will be built, has risen to 710 million won at the end of last year. The actual transaction was recorded at 6 billion won. Currently, jeonse for sale has fallen to the low 500 million range.

In addition, in the metropolitan area, Suwon, Gwangmyeong, and Dongtan were selected as regions with a large drop in jeonse. All of these areas are experiencing a decline in apartment sales at the same time. 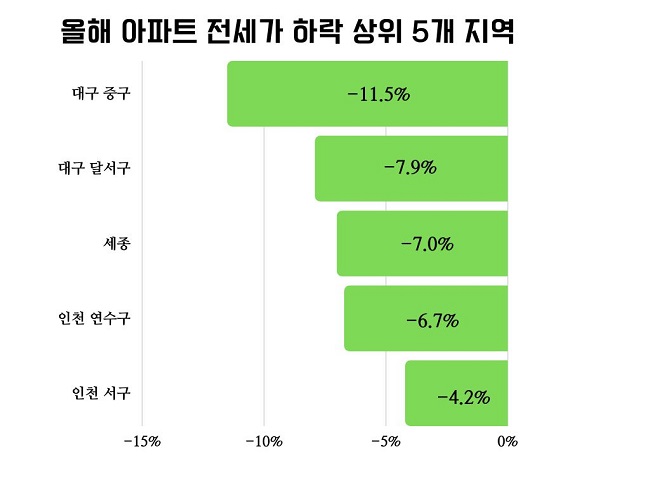 In Seoul, the price of jeonse was -0.5%, which was lower than that of the whole country (-0.4%). In Yangcheon-gu, Seoul, apartment jeonse prices fell the most at -1.4%, followed by Eunpyeong-gu, Seongbuk-gu, Seodaemun-gu, and Gangseo-gu in Seoul with -0.9%. In the southeastern area of ​​Seoul, where the 4 districts of Gangnam (Gangnam-gu, Seocho-gu, Songpa-gu, and Gangdong-gu) belong, the rental price of apartments fell relatively less at -0.2%. In Seoul, the proportion of loans for cheonsei, which is limited to 500 million won, is high in areas with mid-to-low-priced apartment complexes. 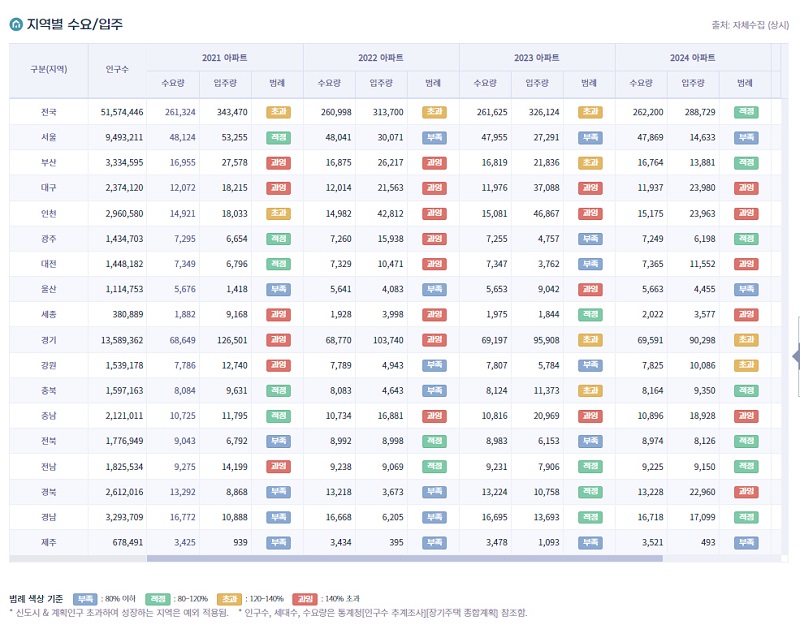 ▲ A capture copy of the demand for move-in from 'Real Estate People', a real estate information site. Daegu, Incheon, Sejong, and Chungnam are classified as areas with an oversupply of apartments in the future. Apartments in Seoul will continue to fall short of demand.

How much more will Jeonse fall in the future?

The real estate information site real estate acquaintance analyzed the amount of occupancy compared to the demand by city and province. By city and province, Daegu, Incheon, Sejong, and Chungnam have 'excess' apartment occupancy for three years from this year. In these areas, there will be a supply bomb along with an increase in the interest rate on the Jeonse loan, so it is highly likely that the price of an apartment Jeonse will fall further. It is a reasonable choice for tenants to choose monthly rent rather than jeonse right now.

It is expected that the number of apartment occupants in Seoul will continue to be insufficient for the next three years. However, since the supply bomb is expected to be made in Gyeonggi and Incheon, especially Incheon, the rental demand in Seoul is dispersed. Recently, in the Gangnam area of ​​Seoul, the price of jeonse is falling by hundreds of millions of won. Because jeonse itself is higher than in other regions, the demand for jeonse is 'distributed' because there is a sufficient supply of apartments in Gyeonggi and Incheon, which are alternative locations, as the demand for jeonse is 'distributed'.

In Gyeonggi-do, Gwacheon City, Seongnam City, Yongin City, Hwaseong City, Pyeongtaek City, Gwangju City, Yangju City, Suwon City etc. are expected to oversupply the demand for more than two years out of the next three years. In addition, the third new city is expected to move in after 2026. (Although, of course, it is likely to be delayed further). In Gyeonggi-do, the total new demand for apartments is about 70,000 households per year. About 320,000 households will be supplied sequentially in the third new city alone. According to the real estate policy recently announced by the government, in Gyeonggi and Incheon, the amount of apartment permits and permits has more than doubled compared to the demand for apartments.