Original title: A clear banner leading the trend of the times and the direction of mankind—Written on the occasion of the fifth anniversary of President Xi Jinping’s important speech on a community with a shared future for mankind in Switzerland

History is often written in an instant.

On January 18, 2017, at the Palais des Nations in Geneva, in the face of a world full of uncertainties, Chinese President Xi Jinping stood at the height of all mankind, with the responsibility of the leader of a great country and the feeling of the world as a public, comprehensively expounding the construction of the destiny of mankind Community concept.

Time is the greatest tester. Over the past five years, the world has continued to undergo turbulent changes, and human society has moved forward with a heavy burden. The concept of building a community with a shared future for mankind has become more and more dazzling with the dazzling light of truth under the reflection of reality. This is a Chinese answer sheet that keeps pace with the times.

In today’s world, the epidemic of the century is intertwined with the turbulent changes of the century. The global economic recovery has suffered setbacks, racial and ethnic conflicts have intensified, the development gap has widened, human society has encountered multiple crises, and the international order has faced severe challenges. Standing at the crossroads of the times, open and closed, win-win and zero-sum, unity and division, two forces are fighting against each other, and the two prospects are completely different.

What’s wrong with the world? what should we do?

“China’s plan is: to build a community with a shared future for mankind and achieve win-win and sharing.” Five years ago, Xi Jinping made a strong voice of the times at the Palais des Nations in Geneva, effectively leading the right direction of the great changes in the world.

The way of all benefits goes with the times. In the past five years, the connotation of the community with a shared future for mankind has been continuously enriched, and the practical path has become clearer.

The epidemic once again proves that human beings share weal and woe. On May 18, 2020, at a difficult time when the new crown pneumonia epidemic was raging around the world, Xi Jinping proposed to the world to build a community of human health. China was the first to pledge to make the COVID-19 vaccine a global public good, the first to support vaccine intellectual property rights exemption, and the first to cooperate with developing countries in vaccine production. 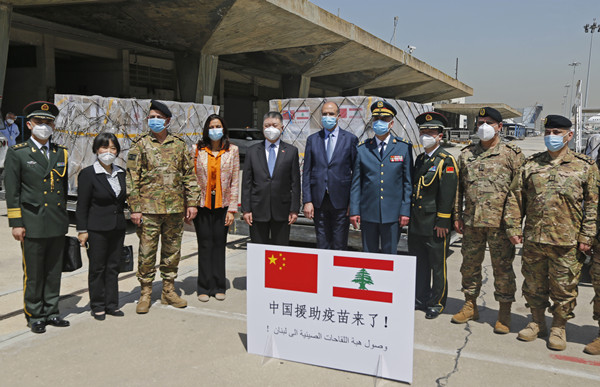 The earth is the homeland on which human beings live. April 22, 2021 is Earth Day. Xi Jinping attended the leaders’ climate summit, and for the first time comprehensively and systematically explained the concept of a community of life between man and nature, seeking the greatest common divisor for jointly building a beautiful home where all things are harmonious.

Development is the key to realizing people’s happiness. On September 21, 2021, at the 76th United Nations General Assembly, Xi Jinping proposed a global development initiative, emphasizing accelerating the implementation of the United Nations 2030 Agenda for Sustainable Development and building a global development community. Just over three months after the Global Development Initiative was proposed, it has already received responses and support from UN agencies and other international organizations as well as nearly 100 countries.

This is China’s action with a promise of gold.

Five years ago, Xi Jinping delivered a keynote speech at the Palais des Nations in Geneva, advocating jointly advancing the great process of building a community with a shared future for mankind, adhering to dialogue and consultation, joint construction and sharing, win-win cooperation, exchanges and mutual learning, green and low carbon, and building a lasting peace and universal A safe, common prosperity, open and inclusive, clean and beautiful world. It’s a blueprint that shows the way the world is going.

The road is simple, and hard work is the key.

Since the outbreak of the new crown epidemic, China has provided more than 2 billion doses of vaccines to more than 120 countries and international organizations, accounting for one-third of the total global vaccine use outside China; Xi Jinping reiterated on many international occasions that China strives to achieve this by 2030. Carbon peaks and the goal of carbon neutrality by 2060; according to a World Bank research report, the Belt and Road Initiative will lift about 7.6 million people out of extreme poverty and 32 million people out of moderate poverty in relevant countries; The UN peacekeeping operations have dispatched more than 50,000 peacekeepers, ranking first among the permanent members of the UN Security Council in terms of the number of peacekeepers sent…

Behind the series of numbers is China’s responsibility as a big country that will do what it says and what it will do. “When the situation is difficult, China always stands up.” Some foreign media commented.

China adheres to a high level of opening up. At a time when the world economy was in a downturn, China pushed for the entry into force of the Regional Comprehensive Economic Partnership. Overseas media commented that this is a powerful counterattack against unilateralism and protectionism, and a major victory for multilateralism. China has successfully held economic and trade events such as the China International Import Expo, the Service Trade Fair, the Canton Fair, and the first China International Consumer Goods Fair, allowing the open spring breeze to warm the world.

China firmly upholds international fairness and justice. On the international stage, China insists that all countries, big or small, are equal, and takes a clear stand against hegemonism and power politics. China promotes the building of a new type of international relations featuring mutual respect, fairness and justice, and win-win cooperation. In the face of the development gap, China insists on inclusiveness and common development. Xi Jinping proposed a global development initiative, starting with addressing the most pressing issues facing developing countries, focusing on promoting cooperation in poverty reduction, food security, anti-epidemic and vaccines, financing for development, climate change and green development, industrialization, digital economy, connectivity and other fields . China has always adhered to the principle of extensive consultation, joint contribution and shared benefits, and promoted high-quality joint construction of the “Belt and Road”.

In 2021, which just passed, Xi Jinping had 79 meetings and calls with foreign leaders and heads of international organizations, and hosted and attended 40 important foreign affairs events via video. Xi Jinping emphasized, “We must uphold the concept of a community with a shared future for mankind, adhere to the common values ​​of peace, development, fairness, justice, democracy, and freedom for all mankind, get rid of ideological prejudice, and maximize the openness and inclusiveness of cooperation mechanisms, concepts, and policies. and jointly safeguard world peace and stability.”

“The green mountains are the same as the cloud and the rain, and the bright moon was once the two townships.” To draw the largest concentric circles for the well-being of the people of all countries, and to gather together the strong synergy to build a community with a shared future for mankind, China must keep its words and deeds.

This is the responsibility of China in the same spring.

It is difficult for those who stand alone to rise, and those who do it all tend to follow.

In May 2017, Xi Jinping presided over the first “Belt and Road” International Cooperation Summit Forum in Beijing, which was full of friends. 29 foreign heads of state, senior representatives of more than 130 countries and more than 70 international organizations participated actively and responsibly. Today, the joint construction of the “Belt and Road” has achieved fruitful results from concept to action, from “freehand brushwork” to “fine brushwork”.

In November 2018, China successfully held the first China International Import Expo with unprecedented grandeur. 172 countries, regions and international organizations, more than 3,600 domestic and foreign companies, and more than 400,000 buyers gathered at “Clover”, and the turnover reached nearly 60 billion US dollars in a few days. So far, the cumulative turnover of the four CIIEs is close to US$300 billion.

Because they share the same desire to pursue peace, development and prosperity, and adhere to the same philosophy of treating each other as equals and respecting each other; because they have the same respect for life and the same yearning for a better life, all countries “vote with their feet” on China’s ideas and actions.

Have the world in mind, and build yourself up to people. The concept of building a community with a shared future for mankind carries the mission of the Communist Party of China to “seek happiness for the Chinese people, rejuvenation for the Chinese nation, and great harmony for the world”, and is rooted in the Chinese civilization of “the benevolent love others” and “the world is for the common good”.

A new crown vaccine traveled thousands of miles to the depths of the Amazon rainforest in Brazil, and was called “the most beautiful gift in the most difficult time” by the locals.

A railway that shuttles through the mountains and rivers, realizes the dream of the Lao people from “land-locked country” to “land-linked country”.

From the “Belt and Road” to global development initiatives, from African brothers to ten ASEAN countries, from the Caribbean Sea to the vast South Pacific, from the “steel camel caravan” galloping in Central and Eastern Europe, to an airport in a severely affected area Landing a plane for transporting vaccines… Most countries and people in the world hold the hand of friendship extended by China and support the building of a community with a shared future for mankind.

The road is long and long, and the journey will come; the journey will not stop, and the future can be expected. The banner of building a community with a shared future for mankind is flying high, guiding the direction of the world. (Reporter Xu Xiangli)