– This event happened around 10.20. An older man, 94 years old, injured himself. He was hospitalized with injuries to his face. We already know that it was not possible to save him. He died as a result of his injuries – Rafał Retmaniak from the Warsaw Police Headquarters told Onet.

Police confirm that yes, there was a loud bang that could have looked like a shot. However, there is no confirmation yet that it was a pistol shot. It could be, for example, a firecracker or other item.

– Our information shows that the man did not participate in the protest. He was probably an outsider. As of now, we don’t know why the man did this self-mutilation. The reasons for its operation are being determined – Rafał Retmaniak told Onet.

A gunshot on the “white town”. The 94-year-old is dead

The gunshot was fired next to the stage where a press conference was taking place. The man was taken by ambulance to hospital. After On 12, the police reported that the 94-year-old had died. This information was also confirmed by the Ministry of Health.

As RMF24 informed, the police found a farewell letter next to the man. The 94-year-old wrote in it, among other things, that it was a protest against the strike of medics, which he believed was political.

“Białe Miasteczko 2.0” has been operating since September 11, after a demonstration of health care workers near the Chancellery of the Prime Minister. The action refers to the “white town” of nurses from 2007. 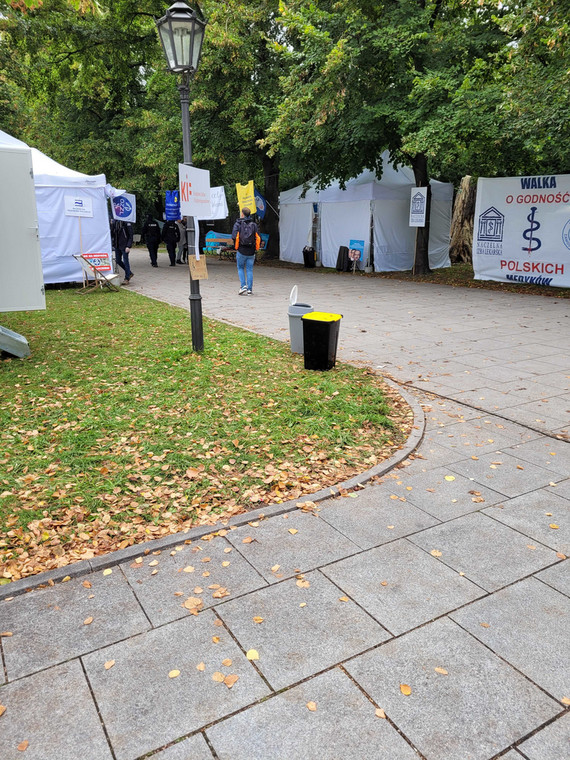 “White Town” in front of the Chancellery of the Prime Minister

Protesters: due to the events, we are giving up the Saturday program of the “white town”

In connection with the events that took place during the press conference of the protest and strike committee in Warsaw, he decided to abandon Saturday’s “white town 2.0” program.

As announced by the protesters, each day in the “white town 2.0” is devoted to a different issue of health protection. Saturday was to be the day of, among others laboratory diagnostics. Before the roar was heard, the following spoke, among others vice-president of the National Council of Laboratory Diagnosticians Matylda Kłudkowska.

– The safety of 38 million Poles rests on the shoulders of a group of approx. 17 thousand. laboratory diagnosticians – pointed out Kłudkowska. – Minister, from this place I would like to ask you what this famous dialogue looks like, which you talk about, because the dialogue of the group I represent, for example on the laboratory medicine act, lasts for your term of office, the terms of minister Szumowski, and all other ministers for 10 years. We do not have a new law, and our salaries are what they are – she pointed out, addressing the head of the Ministry of Health, Adam Niedzielski.

– We do not have a separate valuation of laboratory tests, which are thrown into the cost of medical procedures, just like cleaning or lighting – Kłudkowska enumerated. She appealed to remember that laboratory tests are medical safety.

Cezary Staroń from the Polish Trade Union of Medical Technicians of Electroradiology, in turn, argued that his group did not have employment standards, which results in situations where one person is on duty while serving the entire hospital. – There is no medicine without imaging diagnostics. If we turn off the braces, we’ll take medicine back over 100 years. Medicine is blind without diagnostics, he said.

We are glad that you are with us. Subscribe to the Onet newsletter to receive the most valuable content from us.

The post A gunshot in the “white town”. The 94-year-old is dead, the man left a letter appeared first on Newsy Today.