The guests, strengthened by two wins at home, entered the match in an aggressive mood. However, Motor took the lead in the 3rd minute, when the defender Dujsík sent the disc directly from behind the goal to Gulaš’s hockey stick, who ended his lightning solo with a leading goal after the backhand to the backhand.

Three minutes later, with the exclusion of Klimek, Pech found an accurate pass from the right circle in front of Ondráček’s goal, which increased the lead of the South Bohemians with a close-up shot. Goalkeepers Lukáš were then employed by Beránek and Hanzl with dangerous shots. The guests managed to correct happily when they disarmed the defense of the South Bohemians and Kolouch pushed through a close shot with a shot around a falling player.

From left, Milan Gulaš and Jiří Ondráček from České Budějovice rejoice at the goal.

At the beginning of the second part, the home team defended the expulsion of Hanzl, after which Abdul picked up speed on the left wing and overtook Lukáš for the third time with a shot on the ice from the circle area. Halfway through the basic playing time, the Hanáci offered their hosts almost a minute and a half of a five-in-three power play, and the defender Vráblík sent the disc behind Lukáš’s back from the ring. The Olomouc players also rejoiced soon. During Valský’s punishment, he also registered among the Krejčí shooters in his third match after returning from overseas. Subsequently, at home, Klimka held Hrachovina for a chance. 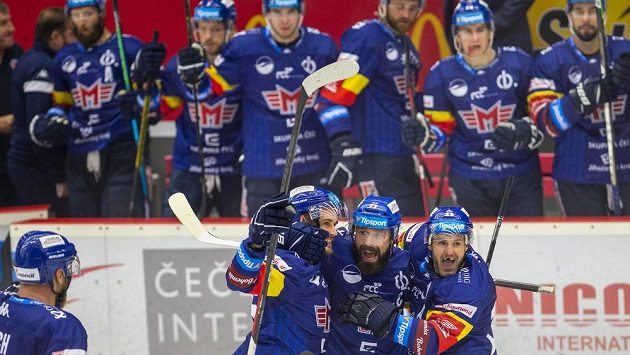 Soon after the start of the third part, Vráblík could raise a bomb from the blue, but Lukáš was against. The people of Budějovice garnered applause for their offensive parades, the influx of which they unnecessarily slowed down by weakening for many players on the ice. The Moravians came to life and even though they failed to overpower, they put the home team under pressure. However, Abdul threatened from the break. The last word was given to Captain Gulaš, who covered Lukáš for the fifth time.