In early 2019, Toyota organized an event in Amsterdam to publicize its future plans in Europe and it was there that it announced a major launch, that of its first B-SUV. In other words, a small SUV ready to pick up the legacy of the first RAV-4 with truly compact dimensions, an urban and adventurous spirit and of course, a hybrid mechanics inherited from the last Yaris.

Well, that model that should have been presented at the 2020 Geneva Motor Show, canceled by the Covid-19, was unveiled digitally that spring, it arrived just a year later in Madrid for a static national presentation and now we have been able to drive it to the end on the roads of our country, specifically between Cádiz and Seville.

The Toyota Yaris Cross is simply the most important launch of Toyota in recent years as it is positioned at the center of its range, being a more affordable and practical alternative to its successful hybrid SUVs on the one hand, and a much more practical utility and capable than the normal Yaris on the other. All this with a price that starts in the 23.350 euros.

Features of the Toyota Yaris Cross

Toyota’s new SUV uses the latest modular architecture known within the company, the so-called plataforma GA-B, that is to say, the same one that uses the new Yaris and of course, it is very similar in mechanical terms to the utility.

Of course, unlike the chassis, the body of the new Yaris Cross boasts its own style, essential to distinguish itself in a segment as competitive as this one. With more marked and robust lines, this one also presents a length 24 centimeters longer than that of the Toyota Yaris but without reaching the heights of the C-HR, and allows the driver to have a high driving position and also a greater cargo space. This allows for a trunk with 397 liters capacity.

Now, this capacity is only for the front-wheel drive versions, since in the 4×4 the additional rear engine reduces space and the volume of the hood is reduced to 320 liters. If we fold down the seats, something that in the more equipped versions can be done in 40/20/40 proportions, the maximum volume amounts to 1,097 and 1,038 liters respectively. In both cases, the Yaris Cross allows, for example, to insert a bicycle without a front wheel in a longitudinal position. In addition, in the 4×2 versions, the Yaris Cross equips the so-called system Smart Cargo that allows access to a double bottom that increases the height and total capacity of the boot.

The official dimensions reveal a car of 4.18 meters long by 1.77 wide, with a total height of 1.56 meters and a wheelbase of 2.56. In short, an athletic but really compact SUV despite being able to have elements of the upper class, such as 16-inch standard alloy wheels that become 17 or 18 ” in the most equipped versions.

The ground clearance that it offers is also generous, 165 millimeters, a feature that is combined with its larger wheels or the special protections for the underbody and wheel arches, to allow the Yaris Cross to face excursions with guarantees. But how could it be otherwise in a Toyota, there is more. The new hybrid motorization that combines a three-cylinder 1.5-liter Atkinson cycle engine with an electric one, can be optionally chosen with the intelligent AWD-i all-wheel drive, a huge advantage over most of its competitors.

Thanks to this 1.5 HEV engine the Toyota Yaris Cross offers 116 horsepower and levels of consumption and emissions contained thanks to the lithium-ion battery that it includes. The declared consumption ranges from 4.4 and 5.2 liters per 100 km and emissions of between 99 and 117 gr / km, respectively, always under the WLTP cycle.

At the level of equipment, the Yaris Cross includes the latest Toyota driving aids, such as the precision system with other vehicles, the detection of pedestrians or cyclists on the road, the obstacle in a blind spot or the lane departure warning with assistant active, as well as an adaptive cruise control capable of bringing the vehicle to a complete stop and restarting the gear. 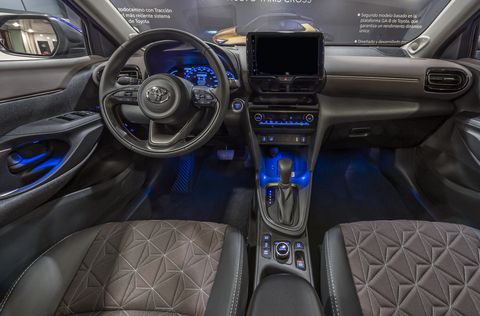 Confidence is the first thing that this Yaris Cross transmits behind the wheel, a car designed fundamentally for the city, but that offers a use much more versatile than we expected. This can be seen from the beginning thanks to elements such as the electric assistance steering, which allows fast and precise guidance and is also quite communicative.

Even more commendable is the suspension, which shows an excellent set-up. It is not necessary to resort to any driving mode or anything like that for this Cross Yaris to run perfectly damped. It eats the potholes and transits the areas of broken asphalt with great ease and yet, in curves, these same springs and shock absorbers are capable of containing the body’s swaying with equal solvency. It is especially surprising in a car as tall and narrow as this one, but its dynamism is undeniable. The front axle goes into turns with ease and only if we push the limits of physics hard in the tightest corners will we see the rear slip a bit, helping us complete the turn.

On more open roads, highways and highways, the sensations are different. It is still comfortable with suspensions to travel and with four generous seats, but the interior loudness is high at high cruising speeds. The reasons are two and very clear: the first is the well-known operation of the CVT gearbox, which over-revs the engine when we demand great acceleration and the second is the poor aerodynamics it presents.

Its height and its straight and vertical shapes generate sounds that clearly filter into the interior, especially at the height of the rear view mirrors, which are gigantic! Surely for this reason, the promised consumption of 5.2 liters per 100 km maximum, were revealed higher. In our contact, it did not drop below 6.5 l / 100 km. At more contained speeds, the general driving pleasure returns to the cabin, and the good consumption figures to the trip computer.

An extra traction and habitability

But if this model stands out for something, it is because it is the first car in its category to have an all-wheel drive, the so-called “Intelligent” AWD-i. This 4×4 system allows us to have a very valuable extra to move on sandy or low-grip terrain and it shows a lot at the wheel. Best of all, the driver does not have to do anything to have this help and get out of any trouble.

An extra electric motor is added to the set in the rear axle and the electronic management of this, allows you to have something more than 60% of the torque at the rear wheels if the system detects motor skills problems, always giving greater prominence to the axle wheels that have the most traction at all times. In addition, the electronic Snow and Trail programs are added to the package so that the electronic traction control adapts to riding on snow or dirt and intervenes with greater precision. I was caught by the storm Filomena in the normal Yaris Hybrid … these assists would have come in handy! 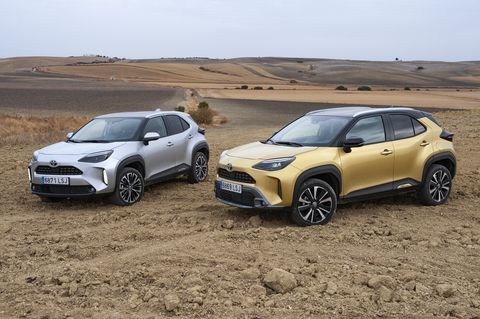 The negative point is that the 4×4 not available beyond 70 km / h and that despite adding an additional electric motor in the rear end, the Yaris Cross AWD-i has exactly the same power as the 4×2, 116 hp which on the other hand, is more than enough to move this Yaris Cross with joy, whose weight is of 1,260 kilos in its 4×4 version, the only one we have driven so far.

Of what there is no doubt is the gain in habitability it offers. At the rear, we find a more spacious and better conditioned space than that of the normal Yaris, although it still shares with it some defects that in this highly competitive segment, are more pronounced. Let me explain: the seats are ergonomic and have good padding, the distance for the knees is more than enough and that of the head is very generous, but the width is limited, the central square is scarce and we do not find basic elements of comfort such as the armrests and the ventilation intakes, but of course, it is clear that in this model in Toyota they have given priority to another element with respect to the rear seats and it is none other than the trunk.

Toyota wants the launch of this Yaris Cross in the Old Continent considerably increase your sales in this market, and it is that the planned production volume is more than 150,000 units per year so that it expects to reach a quota close to 10% in Europe and that we are talking about a really competitive segment.

The Yaris Cross is produced by the French factory in Onniang, although the gasoline engine is produced in Poland and the battery and electric power unit in Japan. 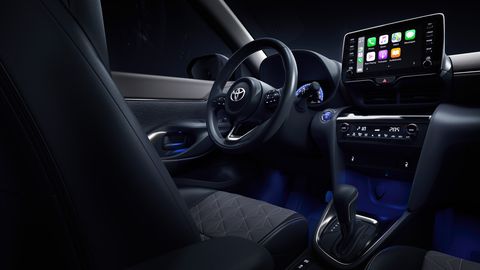 Available only in acabados Active Tech, Style, Style Plus, Adventure y Premiere Edition, only with the last two you can opt for the 4×4. However, the Toyota Yaris Cross can be chosen instead in up to 14 different color combinations and comes standard equipped with 16-inch alloy wheels (17 or 18 are optional), 7-inch digital dashboard, system Toyota Touch 2 multimedia with 8-inch multimedia screen and full connectivity for Apple and Android smartphones wirelessly. These are their final prices in Spain.

This content is created and maintained by a third party, and imported onto this page to help users provide their email addresses. You may be able to find more information about this and similar content at piano.io