Fumio Kishida said that he would implement economic measures of tens of trillion yen, and also pay attention to distribution, and discard the neoliberal road map that has been so far: Photographed from NHK News

The number of wins is getting bigger and bigger! Yoshihide Kono, who was poisoned by the box office again, said that he would support him, which is tantamount to a death grip, and there are more and more defeat factors!

This Liberal Democratic Party presidential election is different from last time. In September last year, because it was an emergency by-election, the party members were not allowed to vote, that is, without the 766 votes of the first round of 383 members of Congress + 383 votes of local party members, they entered directly. In the second round, Yoshihide Suga secured more than 300 votes for members of Congress before the election. Therefore, the mystery has been revealed if he did not vote. This time, there is no one who is elected securely, so it is more interesting. In addition, Noda Seiko will come out. Disrupt the situation, so that the situation will change a little!

Noda Seiko managed to gather 20 members of Congress to help her sign, and was worried that someone would run away or be dragged away on the way, so she didn’t officially disclose it until the last minute, but because she is innumerable. So it is speculated that someone might have encouraged her to come out to scatter the votes of Takashi or Kono! The one who is most angry with Noda’s stance is Shinzo Abe, who is raising the city. Not only that, Noda has emphasized the need to thoroughly investigate Abe and his wife Abe Akie for the crime of Moriyou in his press conference or a four-person joint press conference. The financial bureaucrat tampered with the documents and caused the bureaucrat to commit suicide. Noda emphasized that “concealment, forgery, tampering, and destruction of official documents are absolutely impossible, and most people cannot accept it.” Abe was terrified. As the Minister of Finance, Taro Aso It’s hard to escape her responsibility. Noda has challenged the presidential election three times in the past, but all of them gave up because less than 20 congressmen signed their signatures. This time, 60% of her recommenders are the second order and Yoshihide Suga who are actually very bad with Abe. Helping, that is, the second order and Yoshihide Suga do not want Takashi to be elected, and the votes of Takashi are scattered, making Abe and Aso ugly!

Abe used “Japan’s first female president” to lift the high market. The problem is that at the first meeting, even the Hosoda faction, the largest faction of the former Abe faction, only 4 people expressed support for the high market. And to mobilize the ultra-right-wing congressmen organizations in the party. Yesterday, the Gaoshi reporters had 60 right-wing congressmen who came out to support each other. Moreover, the right-wing organizations have a lot of money and continue to buy online advertisements. Therefore, the Internet is full of high-level videos, but Because the right-wing moves are more exaggerated, and the courage to raise their hands, almost all the support they can see is all. Therefore, Gaoshi trusts Abe’s blessing. This time, he won 130 votes at most, which should be ranked third! Can’t enter the runoff! 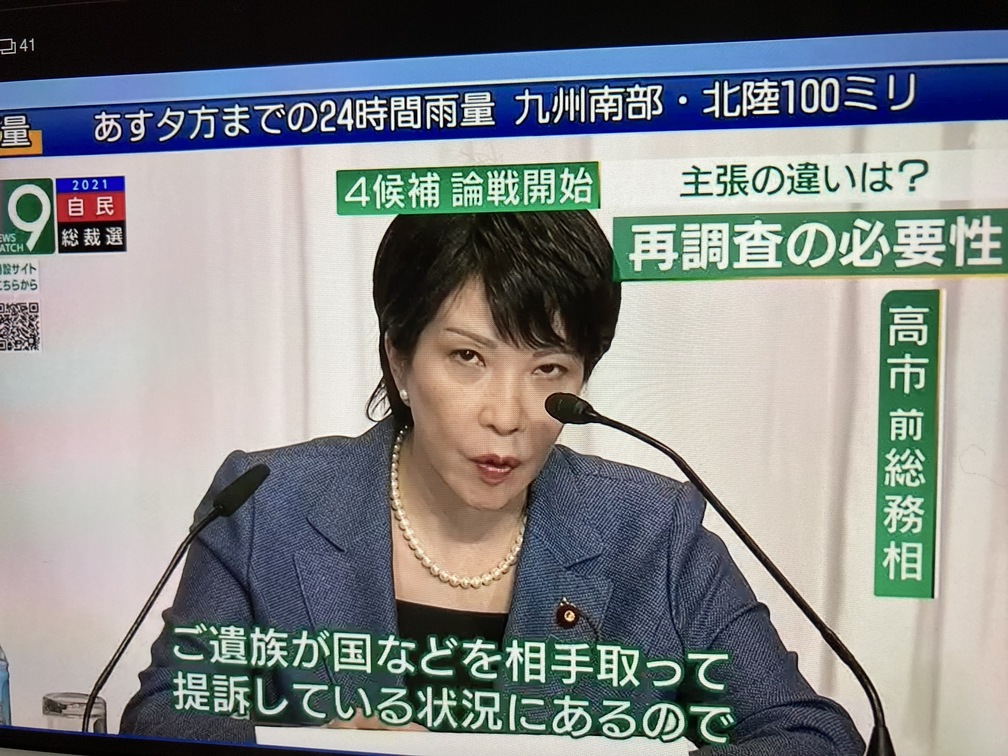 There are many problems in the high market. For example, she said that she inherited Abenomics and will continue to ask for a 2% price increase, but she also said that she wanted to make up for the shortcomings of Abenomics, and proposed an incomprehensible “Sanae Economics” for people. I think it’s my mom who sells coquettish in an izakaya. She feels that she has a bad reputation, and now I no longer mention these few.

In addition, she wants to preemptively attack enemy bases that are hostile to Japan. It also scares all walks of life in Japan. It is obviously more right-wing than Abe. In particular, she emphasizes that she is a woman, but she supports some practices and laws that discriminate against women, such as opposing women. The emperor, opposing the husband and wife’s surname, etc., make people think that this kind of extremely conservative and backward people can be female presidents or female prime ministers? 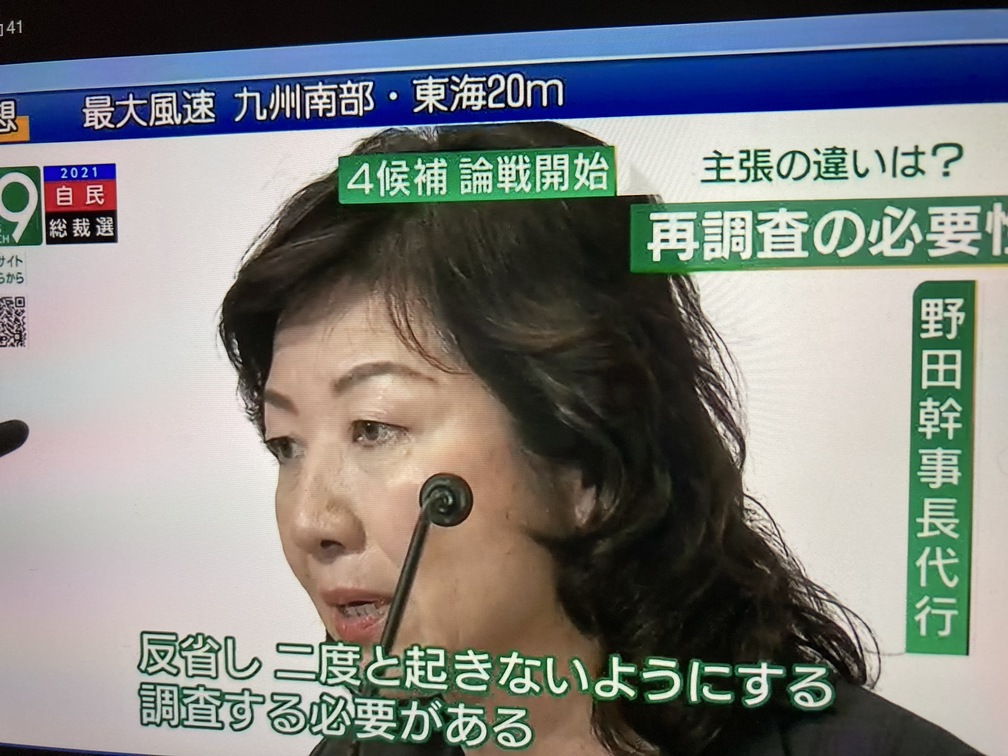 Seiko Noda is not afraid of losing, so he is determined to investigate the Abe Mori friend’s case, and also distracted Sanae Takaichi’s votes, making Abe blow up. Picture: Photographed from NHK News

Noda is also a woman, but his ideas about gender issues, children’s issues, or measures against the new crown are different from Takashi’s ideas. However, Noda did not support the base, and her husband has been registered with a gang (underworld organization) for 10 years. , Members of Congress may really vote for less than 20 votes, but maybe they are still a bit popular among local party members. This part may even distract Kono’s votes, and maybe all can get about 30 votes! The most interesting thing left is the popular Kono and Ishihara faction in polls, as well as Kishida, who has successively expressed their support from the financial circles! The current assessment from all walks of life is that these two people may each get about 300 votes, and then enter the second round! 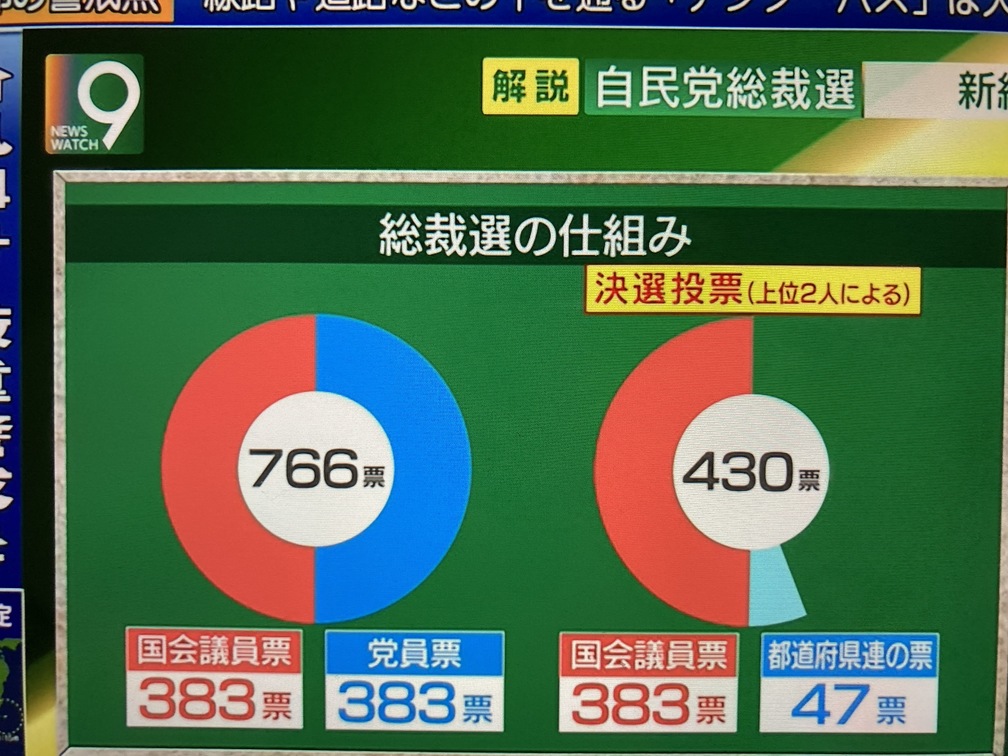 This presidential election will definitely enter the second round of voting, so Kishida won the big picture: Photographed from NHK News 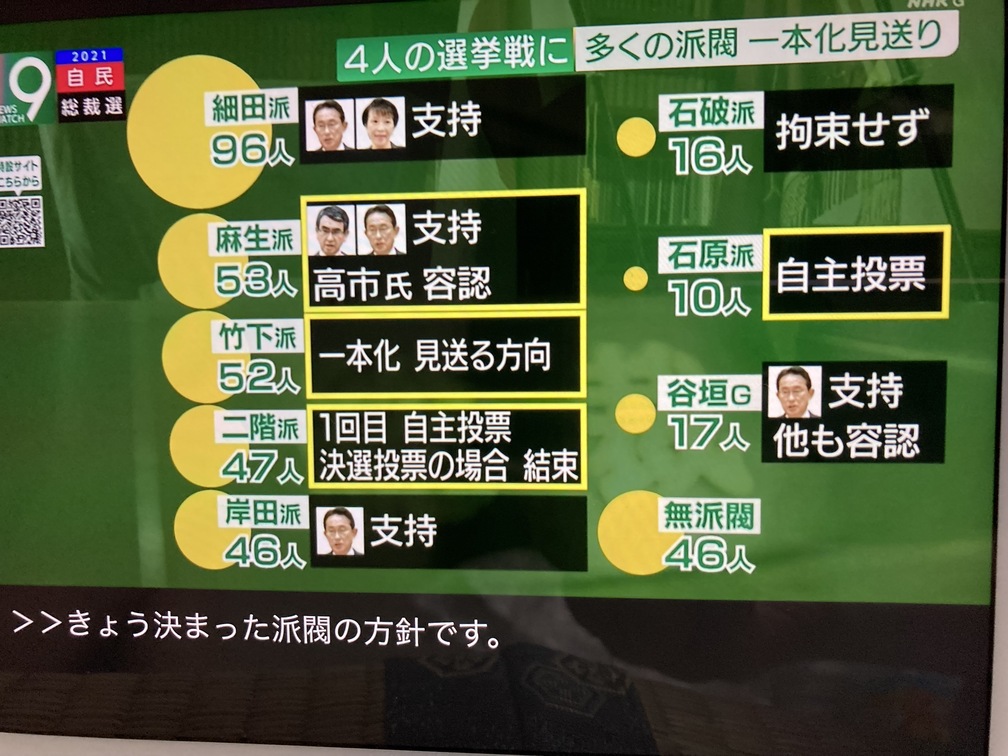 Now the Ishihara faction and all the Kishida faction have expressed their support for Kishida, and almost all other factions are open to free voting. Picture: taken from NHK News 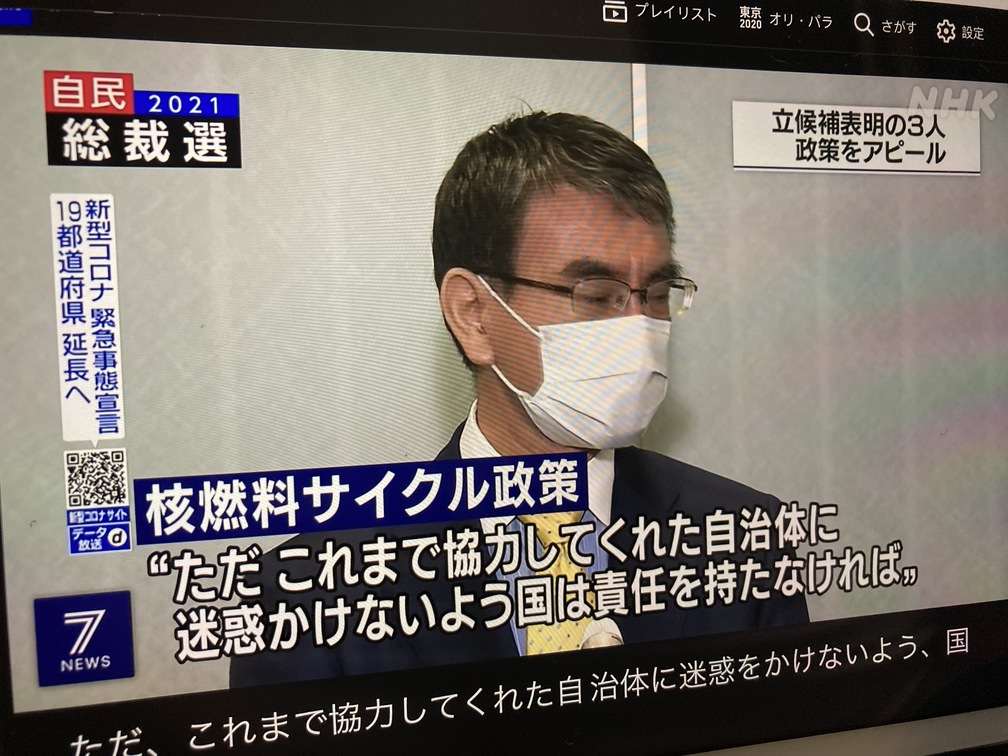 Kono said that he would stop nuclear fuel regeneration as soon as possible, which is tantamount to announcing the abandonment of nuclear weapons and nuclear power, which was bounced back by the stake-related nuclear power and nuclear gangs. China is the happiest and strongly supports Kono. Picture: taken from NHK News

Kono still has a lot of questions, mainly because his pro-China stance is too obvious. Therefore, when asked about how Japan responds to the expansion of China’s military hegemony or North Korea’s launch of cruise missiles against Japan, they are just ambiguous answers, only saying “share values ​​with Noh. No further specific explanation was given. Kono’s retreat in favor of the female emperor or opposition to nuclear power was considered a treachery, but he said that he would stop the regeneration of nuclear fuel when he took office. Regarding the regeneration of nuclear fuel, there is no nuclear fuel. Japan wanted to dream of a quasi-nuclear power in the 1930s. It has been conceived in the Showa 1930s, and has invested 16 trillion yen so far. Although all walks of life believe that it should be stopped, it involves many nuclear power gangs and nuclear weapons gangs. In fact, it was also strongly opposed by many Liberal Democratic Party lawmakers and financial circles who took advantage! It seems that Ishibashio, a popular politician who supports Kono, is the nuclear power gang, and he also squeezed all his daughters into TEPCO!

Although Japan has given up its dream of nuclear weapons, it faces reality in a relatively peaceful manner, but the neighboring countries will applaud China, which currently supports Kono the most!

Kishida’s current performance is quite remarkable. In particular, Kishida stated that he would abandon the neoliberalism that Junichiro Koizumi has promoted since 2000. Although he will introduce economic measures of tens of trillion yen in the future, he will also pay more attention to the healthy growth and distribution. Circulation, etc., are long-term and balanced views based on a national standpoint. Issues related to the Taiwan Strait have never been evaded. In particular, Kishida has recently continuously strengthened communication with the Liberal Democratic Party’s local party headquarters, so there will be no shortage of local party members; if you enter In the second round of the run-off, Kishida has the greatest chance of winning! 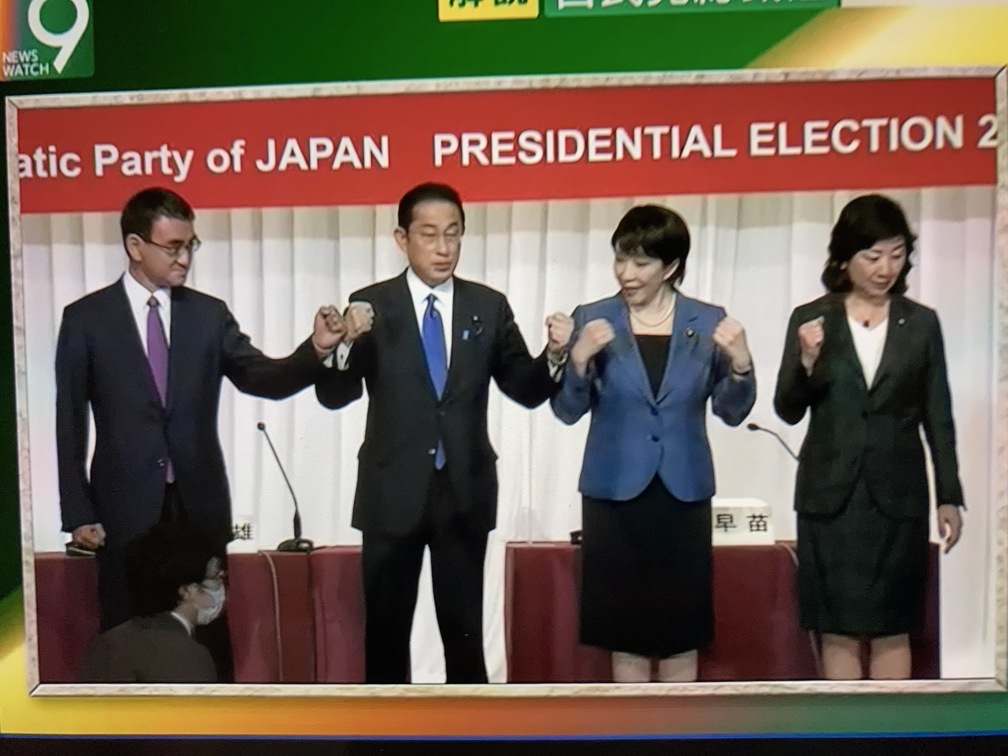 Zimin President elected 4 people, no one will pass half of the first round of voting. Picture: Photographed from NHK News 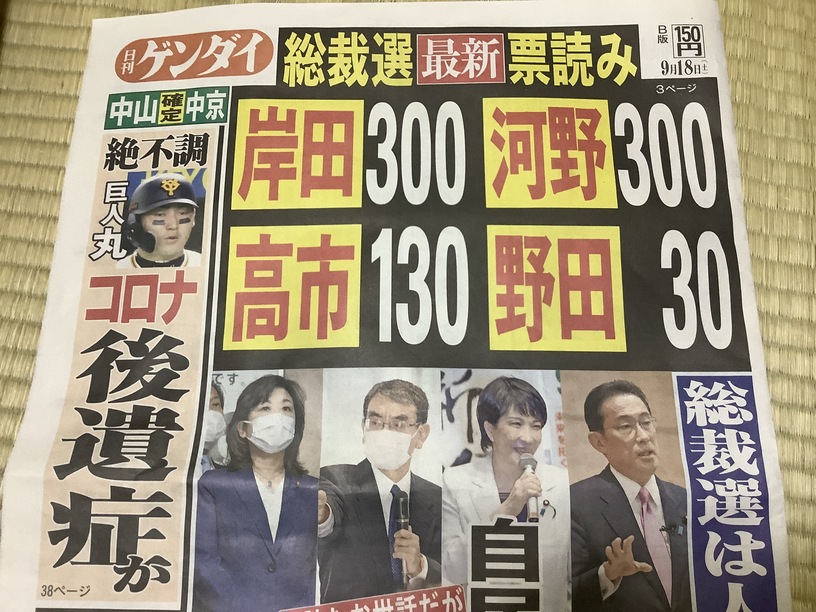 The forecast of the Daily Hyundai is also close to the predictions of many other media. No one can do more than half of the picture in one fell swoop.

The number of wins is getting bigger and bigger!Yoshihide Kono, who was poisoned by the box office, made it clear that he wanted to support him, which was tantamount to a death grip. There were more and more factors for defeat.

Noda Seiko finally got 20 members of Congress to help her co-sign, and he was worried that someone would run away or be dragged away on the way.

The post Liu Lier’s View” Noda Disrupts! The election of Zimin president is bound to enter the second round of the run-off election. The financial sector supports more wins in Kishida | International | 新头壳 Newtalk appeared first on Newsy Today.