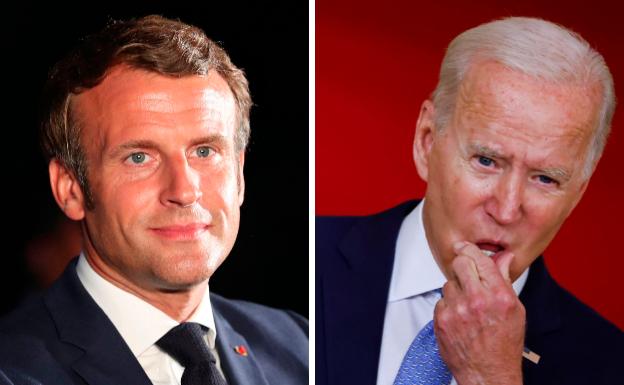 French President Emmanuel Macron will ask his American counterpart, Joe Biden, for “a clarification” and “explanations” about the Indo-Pacific military alliance signed with the United Kingdom and Australia that, apart from ignoring France as a power with interests in that region, has led to the breaking of the contract that the Government of Canberra had signed with that of Paris to acquire twelve diesel submarines. Now it will be the US that takes over this tasty operation and supplies the Australian Navy with nuclear-powered submersibles to sail off the Asian bloc.

Far from abating, the controversy is aggravated by inflammatory statements from the two countries mainly involved in the case. Meanwhile, the United States trusts that the oceanic storm will subside diplomatically and the EU is putting itself in profile. Its president, Charles Michel, said this weekend that the crisis goes “beyond” the bilateral relationship, but believes that the deal between Brussels and Washington has improved considerably after the Trump era. “We have different opinions and approaches at the international level, which does not mean that it is not possible to have a relationship despite these latest events of the conflict in the Pacific, which have been done without consulting the EU,” he said.

At the Elysee, the anger continues to mount. After withdrawing his ambassadors in the US and Australia and questioning the appropriateness of the EU continuing to negotiate a large permanent trade agreement with this country, Macron wants to hear from Biden himself the reasons why he has ignored one of the main powers of the Old Man. Continent, it has literally ‘lifted’ a contract worth tens of billions and has secretly led the process of creating Aukus, the new tripartite military coalition. This was made clear yesterday by the spokesman for the Executive, Gabriel Attal, who added that the two presidents “will speak by phone in the next few days” at the initiative of the United States.

Hours before this announcement, the Minister of Foreign Affairs, Jean-Yves Le Drian, was very comfortable on television, where he proclaimed that “there has been a lie (…), a duplicity, a great breach of trust” and a “Contempt” on the part of France’s allies. The head of Gallic diplomacy justified the “very symbolic” act of calling his ambassadors in Washington and Canberra for consultations out of interest in “understanding and showing our former partner countries that we are very unhappy, that there really is a serious crisis between us ».

In the British case, the Government debated whether to call its representative as well, but ruled it out considering that London is the “fifth wheel of the car” in the triple military alliance, which it would have joined due to the “permanent opportunism” of the United Kingdom. .

Hurting pride is bad, but doing the same damage to your pocket is even worse. France is not only indulging the coalition; He also wants the involvement of great players on the international board. For this reason, it appeals to the European Union, which has already denied that the controversy of the submersibles affects trade negotiations with Australia, and NATO, with the same result so far.

Le Drian did not even hint yesterday that France could abandon the Atlantic Alliance, but he did predict that this crisis will influence the definition of NATO’s new strategic concept. “NATO has begun a reflection, at the request of the President of the Republic, on its foundations. At the next summit in Madrid there will be the conclusion of the new strategic concept. Of course, what has just happened will have to do with this definition, “said the minister.

On the contrary, the military president of the Alliance, Rob Bauer, stressed that there will be no changes in the “military cooperation” of the organization. What can be activated, on the other hand, is the future European Defense Corps, in view of Biden’s commitment to establish new coalitions and focus his rival in China.

From Canberra, Prime Minister Scott Morrison again denied that he had “lied” to France. “They had every reason to know that we had deep reservations about the fact that the capabilities of the Attack-class submarine did not serve our strategic interests and we made it very clear that we would make a decision based on our national interest,” he said.

No meeting of French and British defense ministers

The meeting between the defense ministers of France and the United Kingdom scheduled this week has been canceled due to the discomfort of the French government over the signing of the Aukus military alliance. Both were to participate in the Franco-British Council, whose co-president, Lord Ricketts. He explained yesterday that it will be “postponed to a later date.”

The new British Foreign Minister, Liz Truss, also intervened in the controversy this weekend by defending London’s position on the grounds that it demonstrates “firmness in defending our interests” and “our commitment to security and safety. the stability of the Indo-Pacific region. ‘

The post Macron demands from Biden an “explanation” for the “serious crisis” of the submarines appeared first on Archyde.