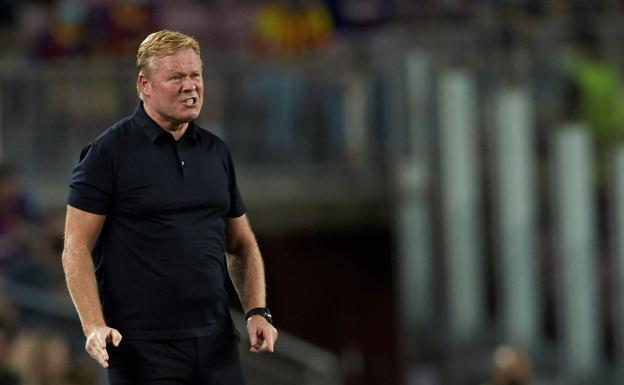 Barcelona has a final exam at the beginning of the course this Monday. The painful defeat against Bayern by 0-3 has put Ronald Koeman in the pillory and has made the duel against Granada at the Camp Nou a crucial match for the Dutch coach’s continuity at the club. It is only worth winning for the Blaugrana team so as not to make a crisis bigger that threatens to blow up the project at the first change.

Three league games and one Champions League have been enough for Barcelona to reach the Camp Nou on September 20 with emergencies. Several members of Joan Laporta’s board of directors asked for the head of Ronald Koeman after the defeat against Bayern and the Dutch coach will have a one-week ultimatum that will begin this Monday against Granada and continue against Cádiz and Levante.

For this reason, Ronald Koeman, who says he is not worried about its continuity and considers the criticisms “exaggerated” and “opportunistic”, will put all the meat he has available on the grill despite having played the Champions League and dealing with a week with three games. Barça needs the three points and the Wembley hero will form with the main weapons that Koeman has at the moment, taking into account the losses of Pedri, Jordi Alba, Dembélé, Umtiti, Braithwaite and Agüero due to injury.

Neither will Ansu Fati be there, already with the medical discharge but who from the club do not want to force for fear of a possible relapse.

Koeman confirmed on the eve of this cheating match that the young winger will return shortly and responded with utmost sincerity to those who accuse him of carrying out a conservative approach, inappropriate to the essence of Barça, against the Bavarians. “If we play more open, the defeat is wider,” he was sincere this Saturday.

The match against Granada will also serve as a Camp Nou plebiscite after a troubled week. Against Bayern you could see the resignation of a public that already expected a bad result against the Bavarian giant, but against the Nasrid team, Barça must hit the table if it wants to avoid the judgment of a hobby that has already suffered in the last months with the situation that the club is going through.

Opposite, Barça will have a rival in low hours. Granada arrives at the Camp Nou touched after failing to win in the first four days. Villarreal, Valencia, Rayo Vallecano and Betis have scratched points against the Nasrids and have raised the first doubts in Robert Moreno’s project. In this interval of matches, the Andalusian team also shows one of the worst defenses in the championship with 7 goals against, a bad inherited from last season since Granada was the team that received the most goals with 65 goals.

Despite this, Robert Moreno has assured during the week that his team goes to the Camp Nou with the idea of ​​breaking the bank. «This group has already shown it; we are capable of beating anyone. Of course we can defeat Barça at the Camp Nou, a draw for them would be horrible and if we win twice as bad. I think we can win every game, “said the one who was Barça’s second coach in Luis Enrique’s stage.

Robert Moreno will have all his troops except Neyder Lozano, still in the process of recovering after a fractured tibia in 2019. Last season Granada already blew up the Camp Nou. It was matchday 33, Barça reached the final stretch of the championship as one of the fittest teams and against Diego Martínez’s team they could take advantage of Atlético’s stumble to take the lead. None of that happened, the Nasrid came back from Leo Messi’s initial goal thanks to the goals of Darwin Machís and Jorge Molina and started a Blaugrana decline in the last league games that led to Koeman’s team to be third and without the option of winning the qualification.

The post Plebiscite at the Camp Nou appeared first on Archyde.