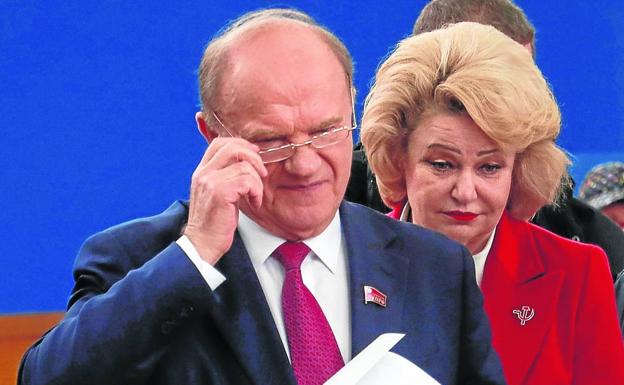 The candidate of the Communist Party of the Russian Federation, Gennady Zyuganov, casts his vote. / EFE

The exit polls granted in advance a clear victory to the formation of the president, which could even revalidate the constitutional majority | With 40% scrutinized, the United Russia party obtained 43.39% of the votes

Half of the 450 deputies in the State Duma (Lower House of the Russian Parliament) are elected by party lists and the other half by open single-member lists in constituencies, which complicates the scrutiny and delays the appearance of final results.

According to the first official results, more than 40% counted, United Russia, Vladimir Putin’s party, obtained 43.39% of the votes, according to the results announced by the Electoral Commission once 21% of the polling stations had been counted. They are followed by the communists of the KPRF (21%). LDRP nationalists (9%) are third, followed by the recently created New People formation and Just Russia centrists.

The exit polls carried out during the three days that the voting has been held gave United Russia the absolute majority and may even revalidate the qualified or constitutional majority, necessary to amend the Magna Carta. In the social network Telegram even the provisional result circulated late on Saturday. According to these data, United Russia would have reached 47.1% of the votes, the Communist Party of the Russian Federation (KPRF) 19.2%, the ultranationalists of the Liberal Democratic Party of Russia (LDPR) 8.8%, the Social Democrats of Just Russia 8.6% and the newly emerged conservative New People party 5.1%.

United Russia had a result in the legislative elections of September 2016 of 47.8% of the votes, which allowed it to win 343 seats. The constitutional majority is at 300, hence Putin managed last year to reform the Basic Law without any problem and include a clause that allows him, if he so decides, to run for two more presidential terms, after having already consumed almost four in addition to four years as prime minister.

Analysts believe that the head of the Kremlin needs his party to retain a qualified majority in the face of possible legal changes linked to his political future. Hence, I have put all the meat on the grill to achieve it. First by unleashing an unprecedented repression against all his adversaries, starting with the one who most and best stands up to him, Alexéi Navalni, currently in jail.

Then using all possible mechanisms to prevent his detractors from running. Finally, as the organizations defending the rights of the voter suspect, arranging everything in such a way that, if necessary, the results can be manipulated. Social networks were filled yesterday with allegations of fraud in numerous schools by “filling” ballot boxes with dozens of ballots in favor of United Russia. The president of the Electoral Commission, Ella Pamfílova, recognized this and also admitted that there were more than a hundred cases of coercion of people who were forced by their bosses to go to vote.

Navalni, who yesterday could not vote and even less participate in the elections, has not been able to disseminate his recommendations on suffrage either. The opposition leader intended to promote the so-called “smart vote”, asking for support for the one with the best chance of unseating the official candidate. But their lists of how to vote according to constituency have been censored on Google, Apple, Telegram and YouTube under enormous pressure.

Since the Communists have been the second party in the Russian Parliament for decades, it was logical that most of the candidates proposed by Navalni, 61%, belonged to that formation. But the instructions have barely reached the public and although many knew what “smart voting” consists of, almost no one has been able to get hold of the specific guidelines.

«I have voted for the Communists, but not because I have been able to read Navalni’s advice. I did not manage to get them, ”admits Svetlana, a young woman in her 30s leaving one of the Moscow polling stations. He assures that “it was necessary to opt for those who concentrate greater support to try to block the way to the candidates of the party in power.”

If the predictions are confirmed, the Communist Party would ostensibly improve its result compared to 2016, when it obtained 13.34% of the votes and 42 seats. But pending more accurate results, it may not be able to put Putin in a bind. And that the polls in recent weeks did not give the Kremlin party more than 30% support.