Remember the first Chevrolet Trailblazer, which, by the way, turned 20 years old? It was a frame SUV – in fact, a simplified version of the Chevrolet Tahoe, but with a large V8 under the hood and a brutal exterior. The next generation emerged from the Thai Colorado pickup – the Trailblazer became more primitive and offered a maximum V6. The second Trailblazer did not find much popularity, and therefore the management of the General Motors concern again changed its image. This time it’s radical. The name Trailblazer got … a compact crossover!

In fact, this Chevrolet Trailblazer was presented 2 years ago, but only now the Americans decided to bring the car to our market. And it got into the very heat – the compact crossover segment is actively gaining momentum, and only in 2021 we have already tested a bunch of new products: Mazda CX-30, Peugeot 2008, Renault Duster, Opel Crossland, Haval Jolion, Geely Atlas Pro, Volkswagen Taos and the second generation of the popular Hyundai Creta. But a test drive of the Chevrolet Trailblazer showed that it has a good chance of joining this company.

Choosing with our eyes

The first thing that many will definitely like is the design. The predatory “muzzle” with the squint of narrow sections of daytime running lights reminds of the Chevrolet Camaro coupe, and the body paint palette includes both bright shades and options with a contrasting roof. And the two flagship versions offer different exterior décor. 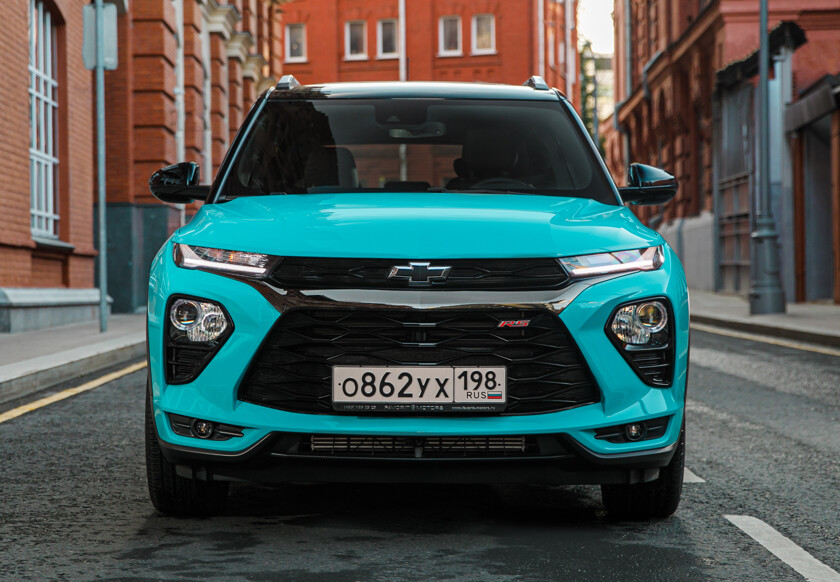 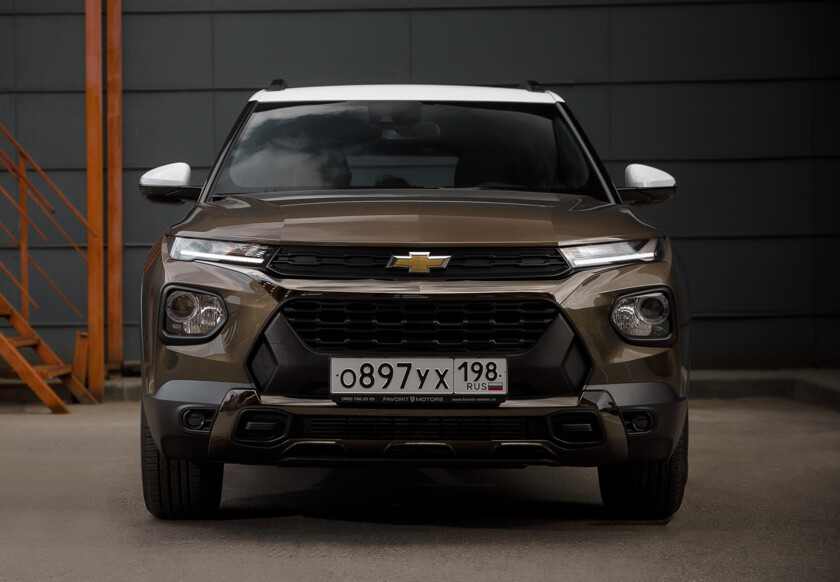 The Trailblazer RS ​​version has more sporty accents in the exterior

The Activ package includes 17-inch wheels, an overall “off-road” image and a double-barreled exhaust pipe at the rear. And the TrailBlazer RS ​​is intended for those who want to stand out even more from the crowd – the discs are an inch larger, the exhaust pipes are also two, but they are spaced around the edges. The front bumper features a large honeycomb-patterned grille. 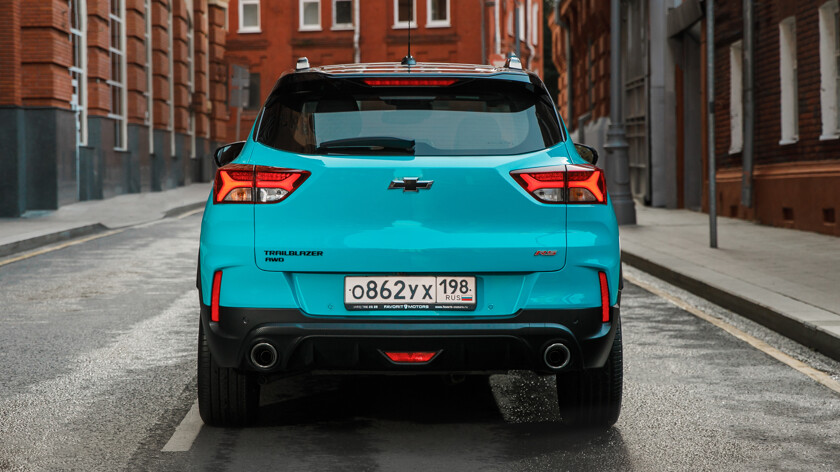 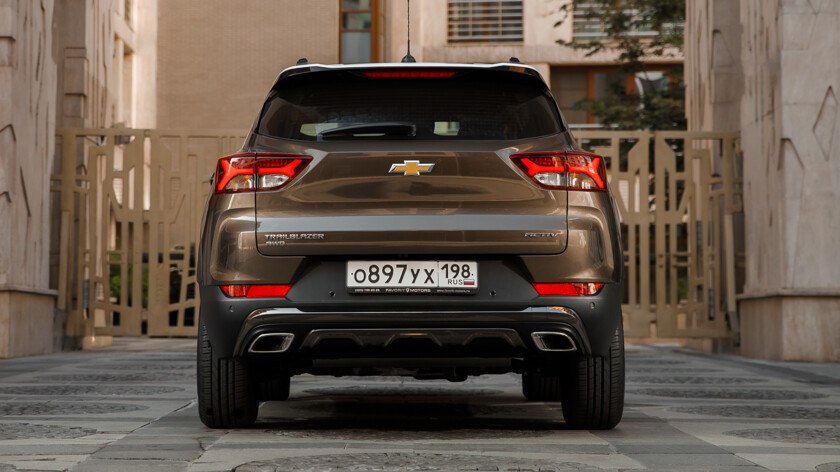 There are differences in the interiors as well – the RS equipment boasts seats with red stitching and a steering wheel with a rim truncated at the bottom. And regardless of the level of equipment, each Chevrolet Trailblazer will surely delight those who do not like the modern trend of shoving as many screens into the car as possible, while removing the buttons. A true digital detox! 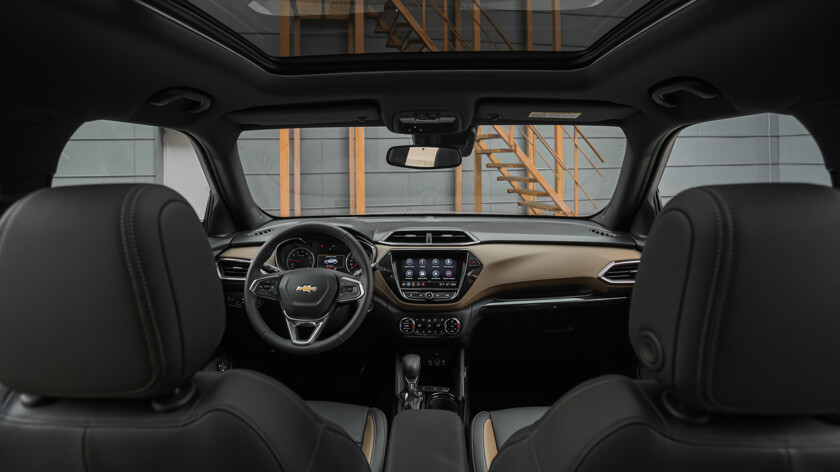 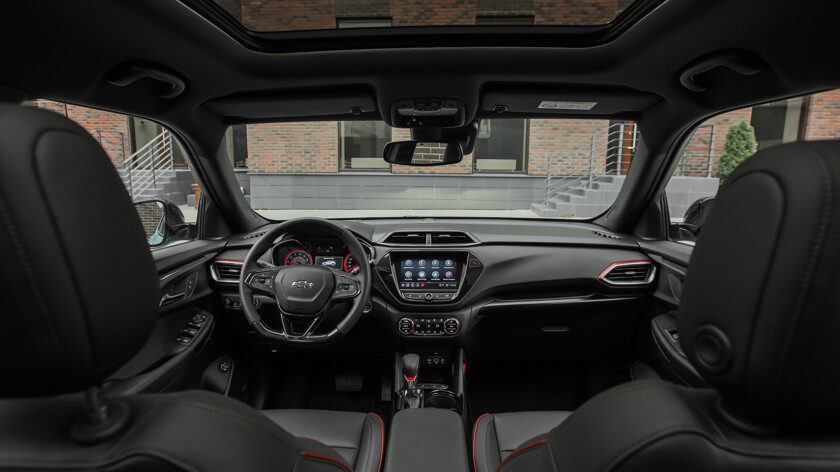 Depending on the configuration, the Trailblazer can be equipped with conventional air conditioning, climate control or a dual-zone system. There are heated front and rear seats and steering wheel, but the windshield is not electrically heated. On all-wheel drive versions, an additional 1 kW heater is installed

The instrument cluster – with a classic tachometer and speedometer, between them is a small but informative display. The microclimate control unit is all push-button. Even the “hot” keys of the multimedia complex were left, although its 8-inch touch screen also responds quickly to touches. Do not consider it a retrograde, but it is really more convenient.

In general, the interior of the Chevrolet Trailblazer is well thought out – there are many compartments for small things, a convenient slot for a smartphone between cup holders, a wireless charging niche, and USB connectors for front and rear passengers are made in two formats – classic USB-A and new USB-C. To the landing behind the wheel and visibility, too, do not find fault. And according to the materials, it does not look completely primitive, although in some places the savings can be traced – for example, only the driver’s glass rises with one click.

What’s hidden under the hood?

In terms of technology, on the contrary, everything is in the spirit of modern trends. The engine for the Chevrolet Trailblazer is offered only one – and it is a three-cylinder turbo engine L3T with a volume of 1.3 liters. The characteristics are not bad – 150 hp. and 236 Nm of torque, and Chevrolet says there is no need to worry about reliability, the same powertrain is used on the Malibu and Tracker models and has proven itself well. 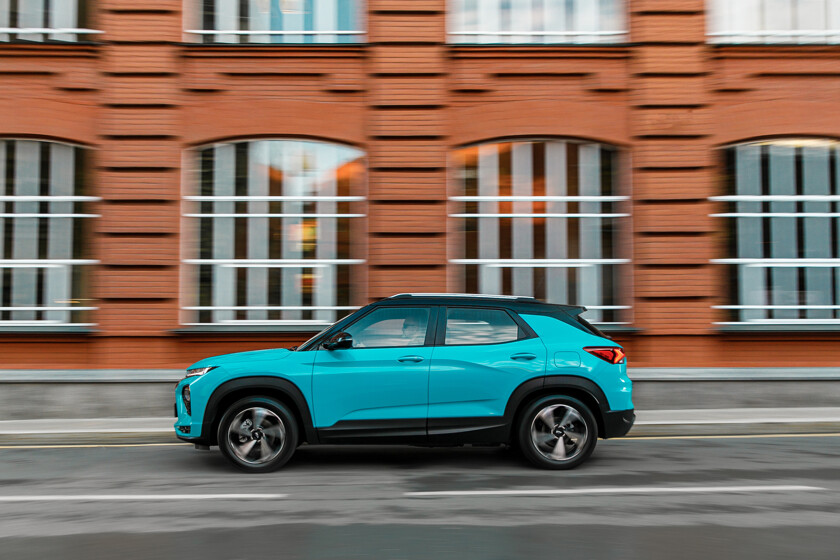 In terms of dimensions, the Chevrolet Trailblazer almost copies the Volkswagen Taos – the length is 4413 mm, and the wheelbase is 2640 mm. The new generation Hyundai Creta is slightly inferior: 4300 mm in length and 2160 mm between the axles

With transmissions and chassis, things are a little more complicated. Front-wheel drive versions are equipped with a variator and a “beam” at the rear, while all-wheel drive versions have a 9-speed automatic and semi-independent rear suspension with a Watt mechanism. But on the test drive of the Chevrolet Trailblazer there were exclusively crossovers with four drive wheels, so there is no need to talk about the difference between the modifications. 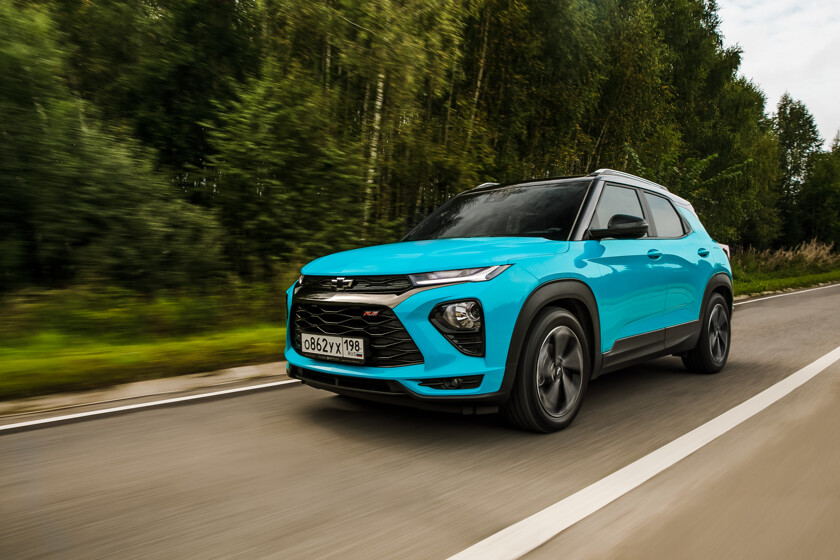 The engine is enough for a one and a half ton crossover – from a place to a hundred Trailblazer accelerates in 10.5 seconds, and if you press the right pedal for a long time until it stops, then in the end the speedometer needle will reach 190 km / h. Indicators typical for classmates. But before overtaking, it is better to do everything in advance – the box does not yet have a sports mode (it will appear in future parties), so the machine is not in a hurry to switch from 9th gear to low gear. 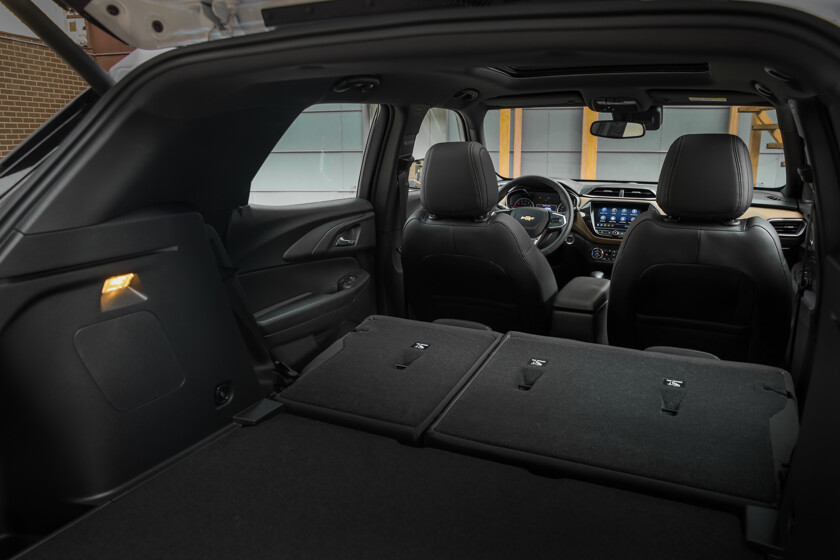 The luggage compartment volume ranges from 385 to 1425 liters, depending on the position of the rear seat. There is a raised floor that can be set 7 cm higher to accommodate small items underneath. A stowaway is hidden underground. The tailgate is electrically operated

The automatic switch is almost imperceptible, and the presence of the 9th stage allows you to save fuel – even taking into account off-road conditions and regular accelerations to maximum speeds, the consumption did not exceed 10 l / 100 km. An important quality when you consider that the tank is only 40 liters. And low revs also reduce engine noise, although in general the Trailblazer’s sound insulation is not bad.

You can drive off the asphalt on a Chevrolet, but with an eye on the low-hanging bumper of the RS version. And under the metal crankcase protection (it is included in the standard equipment), we intend 200 mm, although it is stated for the Trailblazer from 183 to 194 mm (depending on the size of the wheels). In AWD mode, the transmission can confidently cope with slippery clay roads, rocky primers, and the stabilization system can be turned off completely. 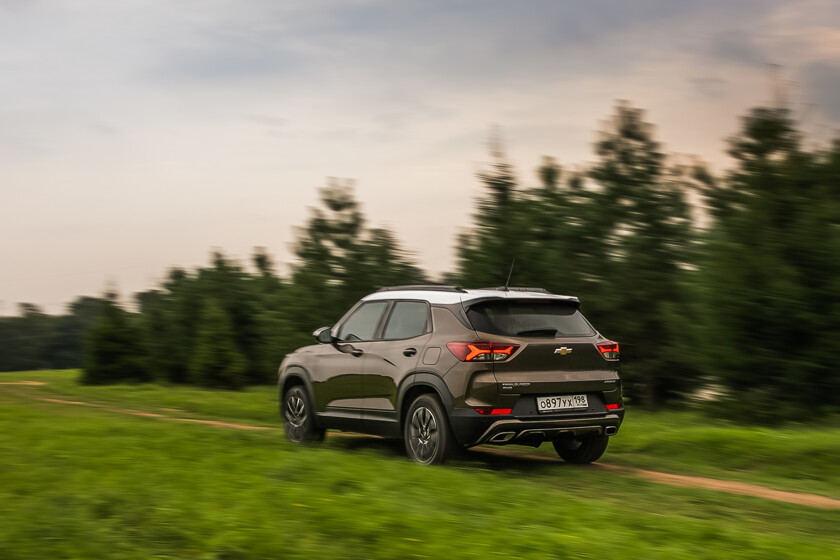 The heart of the Chevrolet Trailblazer is the new 9BXX platform. The body consists of 55% high-strength steel, the package includes 6 airbags. The L3T engine has an aluminum block, but with cast iron liners. The oil pan is made of composite materials. Thermoregulation system with electric water pump allows for more efficient use of heat

It’s nice that the Trailblazer does not turn into a stool on bumpy roads – yes, on 18-inch wheels, the body shakes on sharp irregularities, but the suspension can handle even large holes, and the front shock absorbers have hydraulic rebound stops, so the struts do not rumble. And only the rear suspension allows a slight swing on the waves.

The main question of the test drive Chevrolet Trailblazer

Will the newcomer fit into a segment where major players sell in circulation of several tens of thousands of cars a year? Chevrolet Trailblazer not only offers a striking design, but is also very well balanced in its consumer qualities – it has a spacious and comfortable interior, a power unit that is pleasant to control traction, good handling and a smooth ride. I also liked the brakes – despite the absence of a “vacuum cleaner” (an electro-hydraulic booster is installed), they are well tuned and do not require getting used to.

The large wheelbase provides ample seating in the back row. In addition, the Chevrolet Trailblazer has almost no central tunnel. Heated seats and USB charging in various formats are available at the rear

In addition, the list of equipment includes everything that upcoming competitors can boast of – there is a Bose audio system, a panoramic roof, front seat ventilation, wireless charging, support for Apple CarPlay and Android Auto, dual-zone climate control and electric driver’s seat and tailgate. There are also electronic assistants – a system for monitoring dead zones, automatic braking and keeping in the lane.

One problem is the price. Chevrolet Trailblazer is produced in South Korea and imported to Russia, so the price list can hardly be called attractive. The basic Trailblazer LS with front-wheel drive and CVT costs 2,049,000 rubles. The most affordable all-wheel drive Trailblazer is the LT grade for 2,303,000 rubles, while the flagship Activ and RS will cost 2,447,000 rubles. 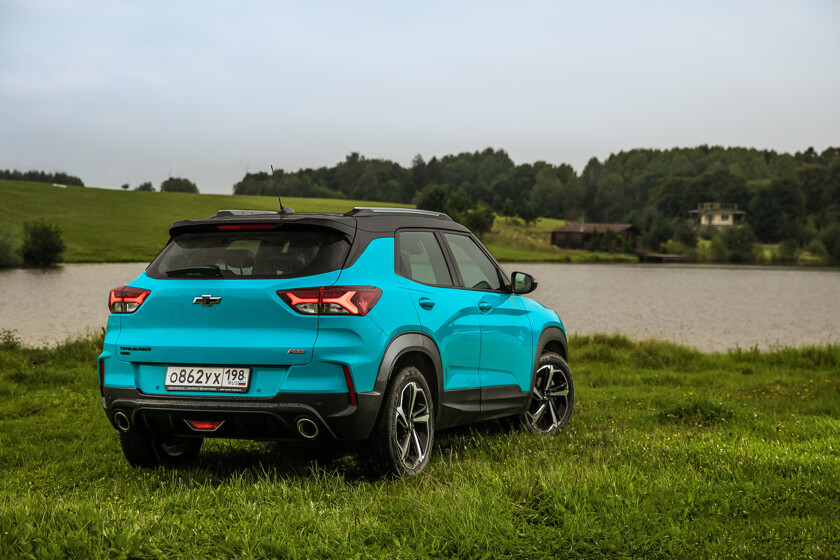 Chevrolet gives Trailblazer 5 years of support – a 3-year factory warranty covers many components and an additional 2 years for the engine and transmission. Service is provided by 15 Chevrolet dealerships plus about 60 former General Motors service stations

So it is obvious that Trailblazer will not compete with either Capture or Creta in terms of sales, which are much cheaper. But Chevrolet considers Volkswagen Taos, Skoda Karoq, Nissan Qashqai and Kia Sportage as the main rivals, and the Americans are quite satisfied with the result of about 5 thousand crossovers a year. And Trailblazer can do it – all the more, given the current deficit and speculative prices, Chevrolet dealerships can be much more accommodating.