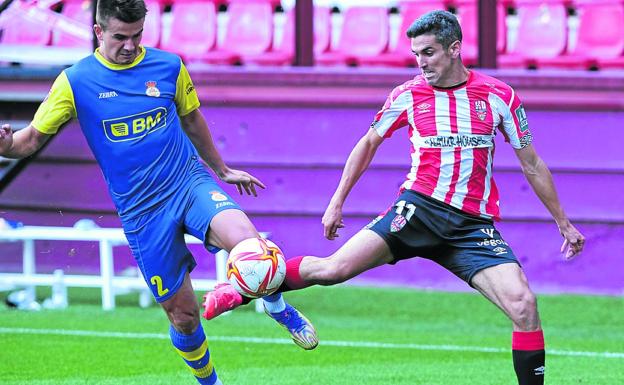 In just nine days, Aitor Zulaika’s team has gone from taking the co-leadership of group 1 of the First RFEF to being anchored in the middle zone. Real Unión gave continuity to the bad match against Celta B in Las Gaunas, giving away the first half against a UD Logroñés who managed to get ahead and tie up the booty.

A goal from Duba in the first act ruined the work of the Gipuzkoan team, who had the entire second half to equalize the contest but lacked opportunities, other than football, to do so. After first showing their most contemplative profile, the visitors went for the equalizer, but they lacked a mordant to overcome a UD Logroñés who is left alone, together with the Unionistas de Salamanca, in their pursuit of the intractable Deportivo de La Coruña. Irun’s block, meanwhile, is satisfied with six points and a clear sense of indefiniteness, qualifying and football.

The Real Union, although it tried to shake off the local dominance, could not do so in a few minutes in which Irazusta did not have to intervene, but in which the ball was from the white and red team that, high and low, put a team in trouble. Outsider painting that only stretched once thanks to Santos, who returned to what was his home for six seasons.

After this demonstration of principles, the Real Unión managed to cool down the match, had more control and returned to step on the Rioja area with a missed shot from Sergio Llamas. When the txuribeltz team had more controlled the meeting, Alfaro dropped from his natural position, raised his head and saw Duba arrive who, first and without opposition, shot a defenseless Irazusta. Zulaika’s pupils came to the break at a disadvantage and giving thanks because the scoreboard, nevertheless, was smiling at them as they could have conceded more goals.

The Real Union coach moved his card in the intermission, giving entry to the Irundarra Capelete with the intention of overturning the game on the right wing, delaying the position of Santos and moving Elosegi to the axis of the rear. These movements translated into greater control but without an offensive presence against a UDL that no longer needed to propose to take the three points.

The ball belonged to the Royal Union, although Serantes hardly had to intervene. Zulaika played it with Elizondo and Pradera. There were twenty minutes left and the only thing left to do was risk. A strategy action badly managed by the Riojan defense allowed Erik Ruiz to equalize the contest. The 1-1 did not go up to the scoreboard due to the Basque defender’s offside. The Real Unión, without apparent hurry, waited for its opportunity against a UD Logroñés that did not show any fissure. Neither with Temenuzhkov nor with Ekhi Senar the Royal Union could scare the Logroño team, who managed the final minutes without haste to, with a minimum exercise, take the three points.

The post The Union returns from emptiness of Logroño appeared first on Archyde.