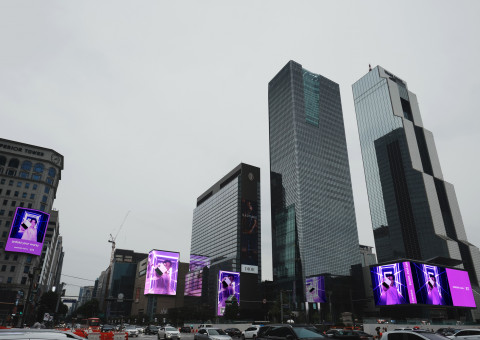 Seoul--(news wire) August 15, 2022 -- Samsung Electronics announced on the 15th that it had screened a digital video of 'Galaxy Z Flip 4 X BTS' in the COEX area in Seoul and Tokyo, Japan on the 13th (local time).

This video was released by Samsung Electronics at Times Square in New York and Piccadilly Square in London right after 'Samsung Galaxy Unpacked 2022' on the 10th (local time). ' It is about 10 minutes of bundled advertisements.

On the 13th, Samsung Electronics screened the video on large screens in four buildings, including K-POP Live, Parnas Media Tower, and H-Live, in the COEX area in Seoul from 1:00 PM to 5:00 PM.

At the same time, in Tokyo, Japan, the video was screened in Galaxy Harajuku (showcase), Shibuya, and Omotesando, and on that day, about 1500 consumers watched the video in Galaxy Harajuku, and newly unveiled innovative products such as Galaxy Z Flip 4 and Galaxy Z Fold 4 have experienced

On-site visitors were able to listen to the sound source with their smartphone by shooting the QR code in the video, and experienced a different moment when the smartphone screen turned purple.

This press release was prepared by the respective company. The media may use this material for reporting.