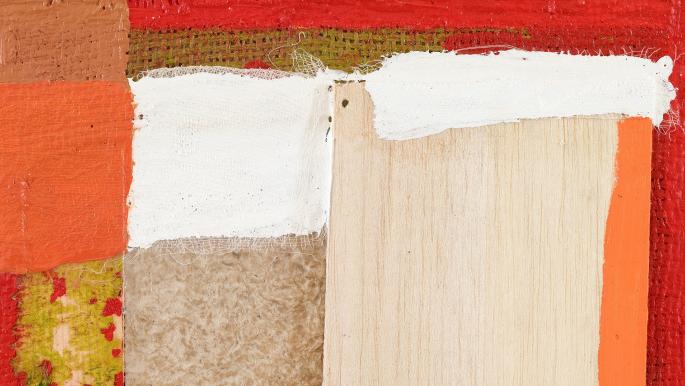 Fragment of Untitled Work, mix on wood 20x20 cm (from the gallery)

I attended the war as an artistic subject in my work plastic artists Lebanese for a long time. Stations that are more like a regular series, may have narrow artistic awareness and may have expressed deep skepticism on the part of the artist in the end trace of war On his daily life, as well as on his creative one.

The Lebanese Civil War (1975-1990) spanned generations of artists, even after its end, and its effects have been shown to extend over time to a period not so distant today, which has been termed postwar . Among the artists who apply some of these influences and their opposite is Walid Sadek (1966).

Until the end of next September, Beirut's "Saleh Barakat Gallery" will host an exhibition comprising 24 works by Sadiq and, without any full title, his works are based on materials andTechniques Different, although close in its general dimensions to the abstract, is not that scholastic abstraction, but a special edition of it that mixes all the post-war doubts with a “minimalist” vision of things, so that everything that is realistic is in miniature.

The miniatures of the exhibition preserve a representation of a reality lived in a country where crises only amplify, while the human sense of art diminishes or vanishes, due to the multiplication of life's immediate priorities. lit adopted by Sadiq's painting is an attempt - within certain limits - to compensate. That diminutive, for example, red and yellow, are present only in their extreme limits, which provoke the viewer.

Objectively it is necessary to refer to the exhibitions that Beirut is attending in this period, most of which are printed in a colouristics inspired by what the city is experiencing, in Sadiq's painting a translation of this no doubt, but the question welcomes more than that also, and this is not surprising if we look at the intellectual background upon which the artist builds his world, is closer to undermining the tendencies than to the one who receives it stands in front of them and builds a scene with clear meanings or landmarks.

Interestingly, this exhibition is the first for the Lebanese plastic artist since 2010, after years of working as a painter and teaching at the American University of Beirut.