Driven by the manga trend, a specialized bookstore opens in Chartres 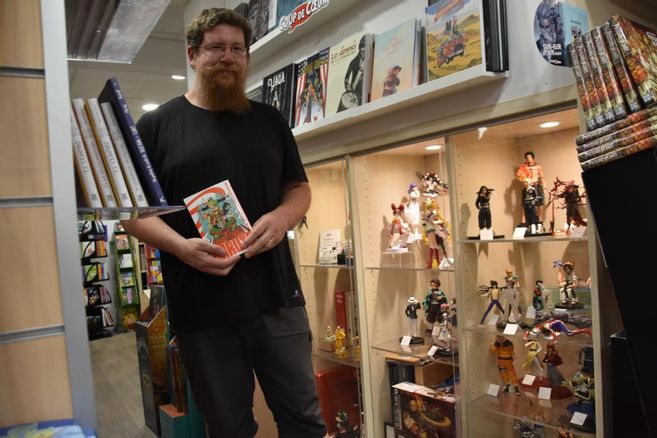 When he opened his flash comics shop eighteen years ago on rue de la Clouterie in Chartres, Jérémie Barbarin was far from imagining the scale of the phenomenon today. In the realm of comics, manga from Japan has carved out the lion's share over the decades.

So much so that the bookseller specializing in comics will open a second store on Tuesday August 16, 2022, which will be located at 10 rue de la Volaille, in the former premises of a travel agency, a few meters from its first business. .

“I saw my manga department explode, in terms of volumes and new releases. I had less and less space to store books. I felt that I was cramped. When we came out of the various confinements and I saw that my turnover had increased, so I asked myself the question of moving or creating a second store. »

The enthusiast chooses the second solution, thanks in particular to this opportunity: the premises of the old travel agency, empty, which stretches out its arms to him.

What can we find in the new store?

From Tuesday August 16, it will have 45 m² dedicated to the sole sale of manga. Paper books of course. But, it will also offer figurines and other derivative products, dedicated to the biggest stars like Naruto, Dragon Ball, City Hunter, One Piece or Nana.

A salesperson has been recruited for the new bookstore, which will simply be called BD flash manga. The opening of this new trade confirms a national trend.

Receive our leisure newsletter by email and find ideas for outings and activities in your region.

The development of the manga: Dragon Ball to K-pop groups

In its infancy at the end of the 1990s, manga in France is hardly known. There is then only one Glénat publisher and two translations: Akira et Dragon Ball.

Since the early 2000s, the phenomenon has only intensified. Several reasons explain this. There are already the children of the Club Dorothée generation, who have become adults and who now have purchasing power.

The arrival of the Internet, then broadband, made it possible to democratize access to a whole section of Japanese culture:

“The current generation doesn't just read manga, they are interested in Japanese and Asian culture as a whole. We see it with Japanese restaurants or K-pop groups. »

Globalization allows much simpler access to cultural products from other continents.

K-pop taking over the world

The manga phenomenon has also experienced an acceleration, at the time of the health crisis and confinements, with the emergence of anime on online video platforms. “This trend has had repercussions on the sale of manga, because the French have turned a lot to reading. »

The introduction, in 2020, of the Culture pass for young people, aged 15 to 18, who are credited with €300, has further boosted manga sales.

“The young people who buy in my shop with the Culture pass choose 80 to 85% manga. According to the French bookstore union and the national publishing union, one in two comic books sold is a manga. »

In his store, the sales figures achieved confirm this reality. “The sale of manga represented 20% of total turnover in 2020; 33% in 2021 and already 40% over the first six months of 2022. The sale of comics remains stable when the manga is on the rise”, details Jérémie Barbarin.

Maybe it's thanks to the generation raised by Club Dorothée cartoons. The children's television icon of the 1980s and 1990s had imported cartoons from Japan, at a time when Ségolène Royale, then deputy for Deux-Sèvres, castigated the phenomenon by summarizing it as follows: “Fear, violence, noise. With minimal animation. Scenarios reduced to their simplest expression”.

The former minister's remark may make people smile today, but it alone sums up the progress made.