The dollar is rising to its highest levels, and the Fed is pushing it towards a greater rise 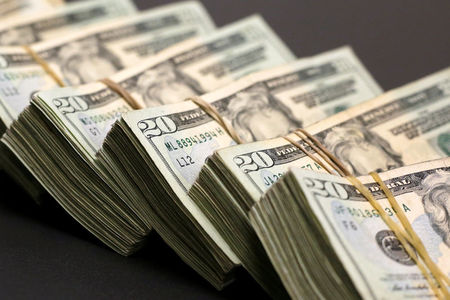 The US dollar rose to a new one-month high in early European trade after Federal Reserve policy makers signaled more strong interest rates ahead in the midst of a battle to tame high inflation.

The index is on track for a weekly gain of around 2%, which would be its best weekly performance since June 12.

Helping the increase was the tone of a number of Federal Reserve officials, including St. Louis Bank President James Bullard and his colleague Mary Daly in San Francisco, who spoke of the need for further rate hikes.

This points to prospects for a third consecutive rate hike of 75 basis points in September, as Kansas City Fed President Esther George said she and her colleagues will not stop tightening policy until they are "absolutely convinced" that inflation is falling.

Elsewhere, EUR/USD fell 0.1% to 1.0083, after earlier dropping to 1.0070, the weakest since July 15. This came after German producer prices rose 5.3% in July, the biggest single gain since the Federal Republic began compiling its data in 1949. Prices are incredibly up 37.2% on the year.

While renewed inflation fears increase pressure on the European Central Bank to raise interest rates again in September, the single currency is not helping as investors appear to be more concerned about recession risks.

GBP/USD fell 0.1% to 1.1913 despite UK retail sales unexpectedly rising in July, jumping 0.3% as British shoppers spent more than expected last month after online shopping offers attracted many who are they.

This may be the last solution for UK retailers for some time, with inflation rising above 10% and the Bank of England warning that the country's economy is likely to enter a recession in the fourth quarter, and could last for more than a year.

The USD/JPY pair rose 0.5% to 136.56, with US yields rising which pushed the pair to the highest level since July 28 and on track for a weekly rise of more than 2%, its best position since June 10.

The risk-sensitive AUD/USD fell 0.1% to 0.6910, while the USD/CHN rose 0.3% to 6.8079, with the Chinese yuan dropping to a nearly two-year low against the dollar following this week's inaccurate economic data. And concerns about the integrity of the real estate market in the country.

The US dollar/Turkish lira pair rose 0.2% to 18.0966, with the Turkish lira dropping to an eight-month low the next day after Turkey's central bank cut its benchmark interest rate to 13% from 14% despite rising inflation.