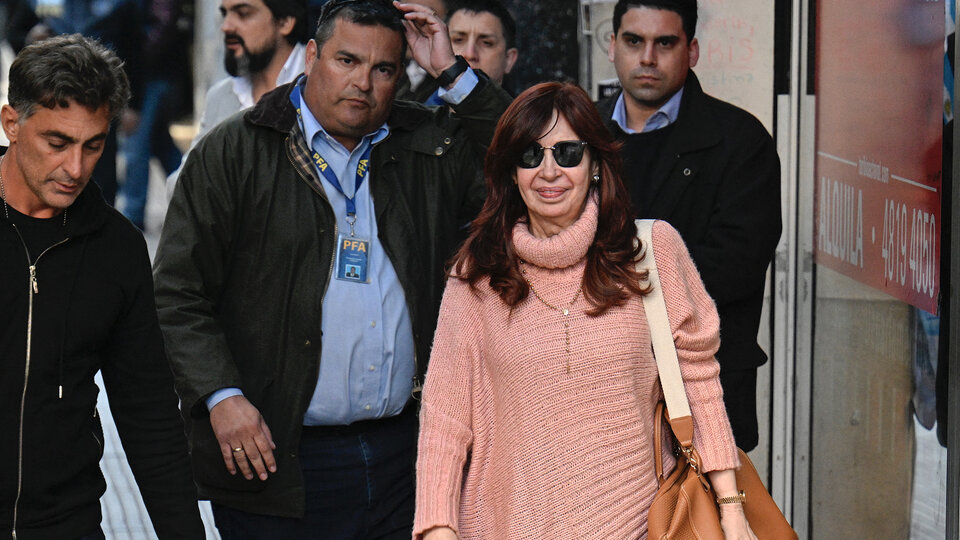 Just a salad and matecocido for her and empanadas for those who walked that floor until dawn. In the middle of it, they looked at the images of her cell phone that had captured her with the gun triggered in her face. A loop that they saw over and over again. And they sought to see and review before another image, with a broader shot, from a Public TV camera. Vice President Cristina Fernández de Kirchner still hadn't fallen for it and she understood what had happened while she was running that succession of scenes projected in her house. They say that she was the one who named it after her: she spoke of assassination. A turning point for those who spent the night with her and the next day, and saw her calm, but also dismayed and moved. Alberto Fernández was at her house on Friday afternoon. Among other topics, to ask him if he was going to go to Plaza de Mayo. She was not finally in the Plaza, perhaps a fact of something that is beginning to change. She left her house in Recoleta shortly before the time of the central act to go to a safe place, according to someone from the environment. From where they also say, beware: it does not shrink.

"At the time he didn't realize anything," they say next to him. "He even walked several meters, seconds, but he kept walking and signing some books." Cristina did not understand what was happening. She reached down to grab a book someone had dropped. She got up. She touched her hair just because. She still walked a few meters. And then came the "pugilato", they say. That moment in which the "kids" and the police threw themselves on top of the "chabón" to get him out. "It was not clear what it had been, it did not seem like an attack, what's more - they say -, everything had something of the scene that he had experienced the night before, when a similar person approaches to swear".

While the street lost concentration and filled up again on Thursday night, several of those passed through Juncal's house who, a little later, also at dawn, framed the attack via twitter through their social networks and on Friday they put the body in the square. Wado de Pedro, Axel Kicillof, el Cuervo Andrés Larroque and Máximo passed. Oscar Parrilli arrived later. Mayra Mendoza was devastated; German Martinez and Juliana di Tullio. Parrilli said something about what happened inside early Friday on a radio. “Last night I was with her after these unfortunate events. At the moment she doesn't realize it. She doesn't perceive it, it was all so fast, fleeting, surprising, because she was trying to pick up a book. When he saw the images above he became aware of gravity”. By then, she was shocked and shocked, but also calm with her spirit and her temper intact, she explained.

At night, CFK talked to her sister. He made other calls. And he spoke twice with Alberto Fernández, before and after the national network. They had already spoken in the morning about her safety and the threats he had received in recent weeks. She listened to the national network as she listened and followed every single thing that came up. The repudiation of Mauricio Macri and the opposition statement. Messages from regional leaders. She spoke with Sergio Massa. And after the national chain. "It was good," they said next to her. She then communicated again with Alberto Fernández. He forwarded a message from Nicolás Maduro, she received it, they called, it was around two in the morning.

Inside, there was everything. Pass bills. First hypotheses. political reading. The effects of hate speech. They roared for the Federal. What's wrong with Aníbal Fernández? Said one of those who was there. The custody had "pifies" throughout the week, but what bothered at that time was the icing on the cake: the agreement that the minister had signed with the City that afternoon, a boycott of the street procession. About the attack, all the variables. "Now we have to get to the bottom," said one of those present. “You have to find out if he is a wolf on the loose or if he works for someone, he has been here for years. Is he crazy or is there something else? Is there something international? If there is someone behind that, it means something else."

Still at night with the house active, Kicillof framed readings. The spiral of violence. At 10:59 p.m. he posted: We have just experienced one of the worst episodes in our history with the assassination attempt on @CFKArgentina. “Those who insist on persecuting, inciting violence and even asking for the death penalty must stop now. You cannot continue to promote hatred and violence." At 01.11, Cuervo Larroque did so with a summons to the Plaza. And at 03:36, Wado de Pedro put it in the context of democracy. "They tried to assassinate CFKArgentina," he posted. “It is an atrocious act of political violence, after almost 40 years of democracy. Hate speech and violence have consequences. It is time to turn our backs on the violent and strengthen democracy.” He also included the “tomorrow everyone to the Plaza”.

On Friday CFK was with the federal judge María Eugenia Capuchetti and the prosecutor Carlos Rívolo in charge of the investigation of the attack, who went to take a statement from her house. He spoke by phone with Pope Francis and Lula Da Silva, who expressed solidarity. At Casa Rosada, Alberto summoned the ministers. They heard his part. And, they say, they asked him to go see CFK. Among the topics, they needed to know how the day was going on Friday and understand their participation in the march. The stage set up by La Cámpora in the Plaza seemed like a sign that she was going to be there. The President went to see her. They say they talked about it. When the hour of the act approached, the Vice left her house. There were versions that indicated that she was going to the Plaza, but those who were close to her warned early that she would not. Cristina left for a house that would ensure the protection of a head of state, they explained.

"All this rethinks democracy for us," said one of his visitors. “But she doesn't shrink. She steps on the ball, and now she waits to see what happens. She does not intimidate her or the threat of a bullet”.