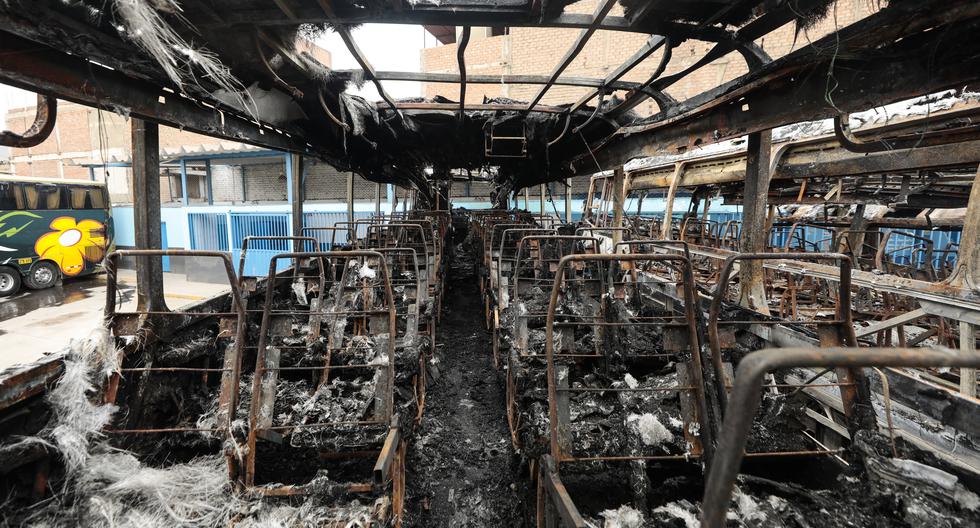 The buses quickly caught fire and caused explosions that scared residents and workers in the surrounding areas. Nearly a dozen firefighters' rescue units were necessary to attend to the emergency that destroyed the interprovincial transport units and generated a loss of more than two million soles, a few days after the company resumed its services.

However, this was not the first attack against the company. Less than 24 hours before, the terminal had already been the target of such an attack. Subjects not yet identified threw up to three bottles of gasoline inside the premises through a window that they broke, but this time the artifacts did not ignite.

After that first attempt at aggression, the representatives of the Flores Hermanos company filed a complaint at the district police station.

Who would be behind the attack?

Martín Ojeda, general manager of the interprovincial passenger transport guild, assures that the threats against formal companies are a constant, but that the terrorist acts, as he describes the attack against the Flores Hermanos terminal, occurred after they obtained permission to resume operations, through Supreme Decree 010-2022-MTCwhich modifies the National Transportation Administration Regulations.

“There are third-party interests here. There are illegal carriers who do not want the terminal to be reopened. They want to continue operating in informal parking lots that operate in front of the municipal authorities without anyone doing anything”, specified Ojeda.

The representative assured that, before the attack, the Flores transport company did not receive threats of any kind and that they are not forced to pay any kind of quotas. However, he stated that other company owners have received threats from mafias that operate around the Fiori exterminal.

Ojeda denounced that interprovincial buses continue to operate on the nearby roads between Tomás Valle and Panamericana Norte avenues, picking up and dropping off passengers on public roads or in garages that have been 'refurbished' as terminals.

According to the Superintendence of Land Transportation of People, Freight and Merchandise (Sutran), it is up to the local authorities to detect the points where an informal transportation service is carried out, either on premises or on public roads, so that the institution can intervene in companies.

Trade unsuccessfully tried to communicate with the Municipality of San Martín de Porres about the control it carries out in the area where the Fiori terminal operated.