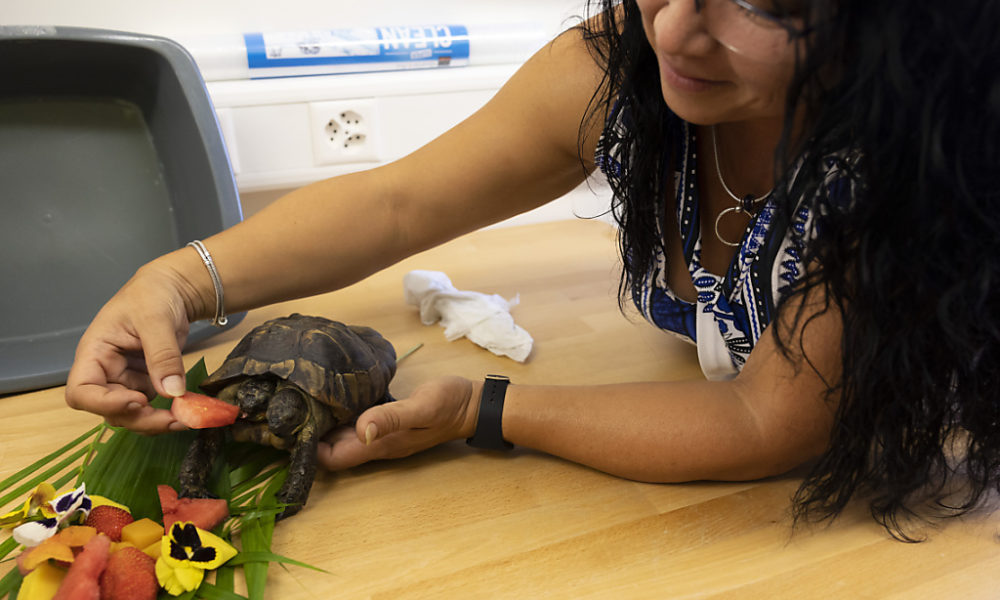 Mascot of the Natural History Museum of Geneva, the Janus tortoise celebrates its 25th anniversary. The animal has the distinction of having two heads, two hearts, two pairs of lungs and two stomachs. It is the oldest known two-headed turtle in the world.

In the middle of nature, the life expectancy of Janus would be extremely short, explains Saturday the director of the museum Arnaud Maeder. The animal does not have the space to retract its two heads in its shell and it would be the victim of the first predator to come. It is also impossible for him, once on his back, to get back on his feet.

Even in captivity, reaching the age of 25 with such a defect is extraordinary, underlines Mr. Maeder. Such longevity is the result of constant attention. Two caretakers take turns day after day to give Janus his daily bath, food and exercise.

The turtle also has regular appointments with the veterinarian. Recently, a large urinary stone was detected in his bladder. Janus had to be taken to the Tierspital in Zurich to have it removed. The operation was so out of the ordinary that it was the subject of a presentation at an international symposium.

Janus is a Greek tortoise. This species, which lives in the Mediterranean regions, has long been considered a pet. It is estimated that in a century, several tens of millions of individuals have been taken from the wild on behalf of private individuals, indicates the director of the Museum of Geneva.

Today, the Greek tortoise, put under pressure by these massive removals, has been placed on the list of endangered reptiles. Its trade is highly regulated, but there is still trafficking, especially in North Africa, because it is a profitable activity, regrets Mr. Maeder.

In the wild, a Greek tortoise can live up to 40 to 50 years. In captivity, it can easily reach 60 years. Some specimens are even centenarians. Janus was born in the Museum of Geneva. The institution had an animal facility 25 years ago. People brought the eggs of their animals there before they hatched.

This is how Janus was born. Even if in reptiles it is more frequent to have two-headed animals than in birds, batrachians or mammals, the phenomenon is nevertheless extremely rare, notes M.Maeder. Janus' owner donated the animal to the museum on the promise of good care.

The male tortoise has become a celebrity far beyond Geneva and Switzerland. When she celebrated her tenth birthday, CNN made the event her image of the day. For its 25th birthday, the animal was given the attention of the biggest press agencies. It is a symbol that the museum did not choose, notes its director.

For his birthday, Janus was treated to a few flowers, a dish that the tortoise loves. For everyday meals, be careful not to give him too much food. Each head has its own tastes and appetites, but Janus has only one intestine and only two kidneys.

This article has been published automatically. Source: ats