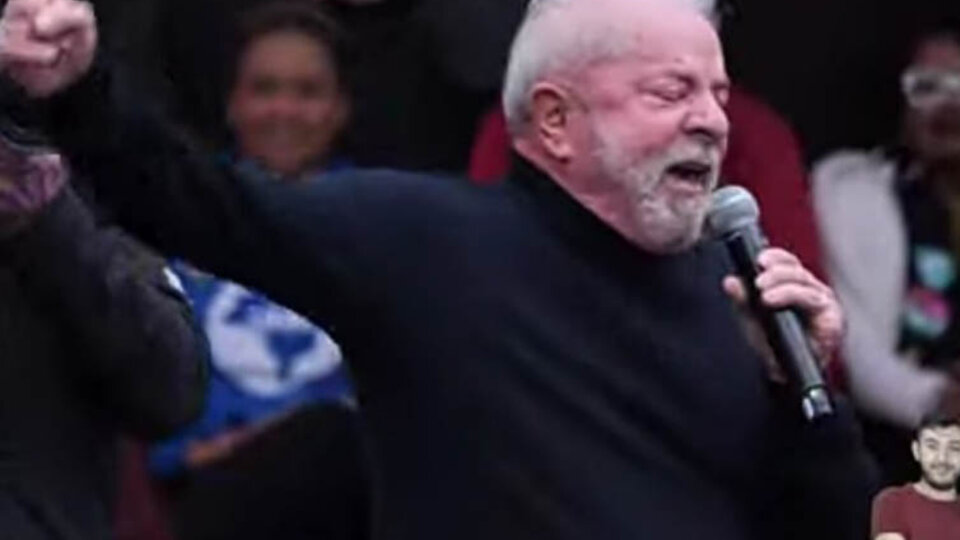 The former president of Brazil, Luiz Inácio Lula da Silva participated this Saturday in an act in Vale do Anhangabaú with more than 70 thousand people, in São Paulo. During his speech, Lula criticized the meetings between Jair Bolsonaro and evangelical pastors, and accused the president of using the church as "a political platform or a company to make money" in his campaign for re-election.

"There is a lot of fake religious newsthere is a devil they call God, and there are honest people they call the devil, because there are people who are making the church a political platform or a company to make money"accused the candidate of the Workers' Party (PT) who is leading the presidential polls for the October 2 elections.

The evangelical vote is a prized prize in Brazilian politics. In recent weeks, the Brazilian head of state has participated in several events with evangelical pastors ahead of the elections.

Also, Lula accused Bolsonaro of "buying votes" through public policies that benefit churches. This week, the government extended the tax exemption to pastors amid an election campaign targeting evangelists. On this, Lula defended the "secular state" and denounced that "all religions have to be protected".

The former left-wing president pointed out that "Churches should not have political parties" or "take care of candidatesfalse prophets or Pharisees who are deceiving these people all day. "Governing is not announcing weapons, violence or fake news. It is caring for people, especially those most in need. That is the role of government," he stressed.

“When I want to talk to God, I don't need priests or pastors, I can lock myself in my room and talk to God for as many hours as I want, without asking anyone for a favor. This is how we have to do it so that we don't have to listen to people tell lies, when they should be taking care of faith, spirituality, when they should be reading the Bible decently,” he added.

The PT leader remains the favorite to win the elections, with an advantage of 15 percentage points over Bolsonaro, according to a new Datafolha poll released this Thursday.

Lula obtained 47% of the intention to vote in the survey, with no changes compared to a similar survey carried out by the same firm at the end of July. For his part, the leader of the Brazilian extreme right slightly increased his intention to vote from 29% in July to 32% now.

Meeting in Vale do Anhangabaú

According to the organization itself and the campaign team, more than 70,000 people attended the event. During the meeting, the former president Dilma Rousseff made reference to the attacks on the electoral system by Bolsonaro and his allies, and stated: “Voting is the weapon we have, it is the democratic weapon”.

Along the same lines, the PT's running mate, Geraldo Alckmin he recalled that “40 years ago we were in that same Valley of Anhangabaú, fighting President Lula and I, in different parties, but on the same side, on the side of democracy, on the side of the people”.

Vale do Anhangabaú, in the center of the São Paulo capital, is a place with a high symbolic component for the Brazilian left. In April 1984, a massive demonstration of the “Diretas Já” political movement was held there, calling for direct presidential elections, in opposition to the proposal of the military regime.

The Brazilian military had created a system of indirect election that, in practice, homologated as President the candidate proposed by the leadership of the Armed Forces.

“Today, almost 40 years later, we are back here because Brazil needs it, democracy needs it,” concluded the vice-presidential candidate and former governor of São Paulo.

The PT candidate for governor of São Paulo, Fernando Haddad stressed that in October, voters must choose between "someone who values ​​the worst of our past, patriarchal, racist, unequal, or someone who wants to build a future with you, with more fraternity, equality, tolerance, opportunity", said the former mayor of the city about the candidacies of the right-wing president and the former left-wing president.

This week, the Ministry of Finance, through its Tax Agency (IRS, for its acronym in Portuguese), decided expand the tax exemption that evangelical pastors receive, in a move that favors one of Bolsonaro's main electoral bases.

The exemption is added to other measures already taken by Bolsonaro to benefit evangelical churches, mainly neo-Pentecostals, property of media pastors close to the president, who are the largest tax debtors and respond to several lawsuits for delinquency.

The president and candidate for re-election increased his lead over Lula from 10 to 17 percentage points among evangelicals, according to a Datafolha survey released this Friday. Among the electorate that belongs to that religious group, Bolsonaro increased his intention to vote from 43% to 49%, while Lula dropped from 33% to 32%.