Optical cables are great for Internet transmission, but sometimes it is not possible to use them. Company X from Alphabet Inc. develops wireless laser internet as part of the Taara project, which transmits the internet quickly and wirelessly. In a recent test, they successfully linked the African capitals Brazzaville and Kinshasu, which are separated by the Congo River.

Among other things, Google’s parent company, the parent company Alphabet Inc., has made significant efforts to develop Project Loon’s wireless Internet network. It was based on balloons at high altitudes, which were to transmit the Internet by laser beams. After promising tests, the project was quite surprisingly completed in January this year, due to astronomical costs.

The hopes placed in the balloons have dashed, but Alphabet experts are still betting on laser internet. He just moved from the stratosphere to the earth’s surface. Company X from Alphabet’s stable, which specializes in revolutionary technologies, is working on the Taara project, the aim of which is to connect places via the terrestrial laser Internet that are difficult to connect to the Internet in the classic way.

The Taara project recently underwent a technological test, during which high-speed laser internet connected two African metropolises – Brazzaville, the capital of the Republic of the Congo, and Kinshas, ​​the capital of the Democratic Republic of the Congo. These cities form a conurbation that has a total population of about 12 million. They are less than 5 kilometers apart. 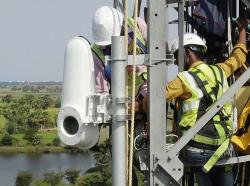 The problem is that these cities are separated by the mighty Congo River. The Internet connection between them is provided by optical cables, which, however, stretch for 400 kilometers. This greatly increases the cost of internet connection in the area.

The laser internet test of the Taara project lasted 20 days. During that time, almost 700 TB of data was transferred, at speeds of up to 20 Gb / s. Laser data transmission over open space will probably never be reliable for a thousand percent, due to flying animals, rain, fog and other complications of various origins. However, it turned out that such a connection is still very reliable and stable.

The laser beam used was about the thickness of a chopstick. He hit the target with a size of 5 cm from a distance of 10 kilometers. The receiving device can automatically maintain a connection even if the laser beam moves back and forth. In some parts of the world, even this is not enough for acceptable reliability of optical wireless communication. However, the Taara project team notes that in most of the world, it is possible to achieve at least 90% availability of such a service during the year. It seems that laser internet could soon become an interesting alternative for areas where they have a problem with traditional internet connection.